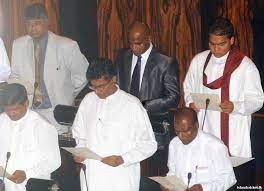 Sri Lankan batting legend Sanath Jayasurya on Thursday expressed dismay over the ongoing economic crisis in the island nation and said it is unfortunate that the people are going through this situation, as reported by news agency ANI. In the report, the former cricketer also called India “big brother” and expressed gratitude to Prime Minister Narendra Modi for sending aid amid the crisis.

“You know as always as a neighbour, the big brother next to our country has been helping us… We are very grateful to the Indian government and the Prime Minister (Modi),” Jayasurya said.

Supporting the ongoing demonstrations calling on President Gotabaya Rajapaksa over his handling of the crisis, Jayasurya said, “There are fuel shortages and gas shortages; electricity is not there for 10-12 hours sometimes. It has been really hard for the people of this country. That’s why people have started to come out and protest.”

He also cautioned that there “will be a disaster” if the situation is not addressed properly. “We don’t want to see these things happening. There are 3-4 kilometres of vehicles queueing for diesel, gas and for milk powder. …It’s really sad and people are hurt at the moment,” Jayasurya said.

Sri Lanka is in the midst of a deep financial and political crisis, struggling to pay for imports and service debt as its foreign exchange holdings weaken. The financial woes escalated further after the government enacted and the subsequent Covid-19 pandemic.

The crisis has led to major shortages of fuel and cooking gas as well as some medicines and essential food items, forcing residents to take to the streets to protest against the government. Jayasurya along with other cricketers, including former wicketkeeper Kumara Sangakkara, have supported the anti-government protests.

On April 6, the country’s chief government whip and highways minister said that the President will not step down from his protests despite protests. “May I remind you that 6.9 million people voted for the president,” he said in Parliament amid outrage by the opposition. “As a government, we are clearly saying the president will not resign under any circumstances. We will face this,” Fernando added.

Meanwhile, Sri Lanka on Wednesday appointed an advisory panel to guide how the nation can deal with its current debt crisis and engage with outside lenders, including the International Monetary Fund, according to a statement from the president’s media office.

Sri Lankan activists take part in a demonstration outside the US embassy in Colombo.
Fuel pumps may go dry in Sri Lanka by end-April as India’s credit line ends

Sri Lanka is expected to exhaust $500 million in fuel aid provided by India to mitigate the island nation’s power crisis with the delivery of 120,000 tons of diesel and 40,000 tons of petrol over the next two weeks. India is scheduled to send three 40,000 ton-shipments of diesel on April 15, 18 and 23, with a petrol shipment of the same quantity to be sent on April 22.

A day after former Sri Lanka cricketer Sanath Jayasuriya expressed his gratitude to ‘big brother’ India for helping his country amid its worst economic crisis in decades, another former cricketer from the island nation, Roshan Mahanama, echoed the sentiment, saying that India has always been an ‘elder brother.’ The former ICC match referee also accused his nation’s governments of neglecting the people. India, on Wednesday, sent two fuel consignments as assistance to its neighbour.