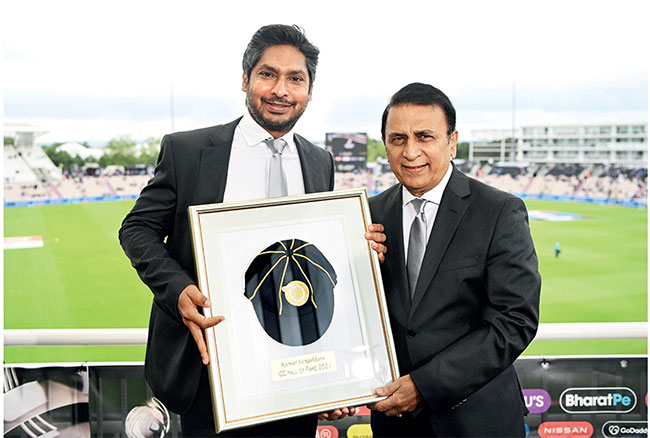 Former Indian cricket captain Sunil Gavaskar paying a rich tribute to Sri Lankan great Kumar Sangakkara said he was the ‘conscience of cricket during turbulent times’. Sangakkara was inducted into the ICC Hall of Fame last week and Gavaskar, the first man to 10,000 Test runs handed the Commemorative cap to the ex-Sri Lankan captain on Sunday at Rose Bowl during the ICC World Test Championship final.

“Kumar you know, with all these tributes paid to you earlier on, I just want to add mine and say, you have been an exceptional cricketer and during the turbulent times our game faced, you along with Rahul Dravid, Sachin Tendulkar and VVS Laxman to name just three, have been the conscience of international cricket. That’s the highest tribute I can pay you. As I said, our game went through turbulent times and you were there for it. Congratulations and welcome to the ICC Hall of Fame,” Gavaskar said.