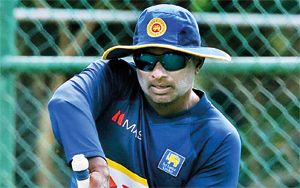 The Under-19 cricketers of past or present lacking first class exposure and only having played school cricket and some of them only with the Under-23 tournament, which is not a first class game either, is the root cause of juniors still without the world title, their coach, Avishka Gunawardene said.

He has observed the Bangladeshis and the English sides, the upcoming tours for his side, and the mighty Indians, where youngsters come with first class exposure. He labelled that as the only missing link, but measured Sri Lanka has enough talent.

“In my experience as a coach, especially during my last world cup, when we lost in the semis to the Indians, they had two players who had featured in the Indian Premier League (IPL),” Gunawardene, told
the Sunday Times, late in the week.