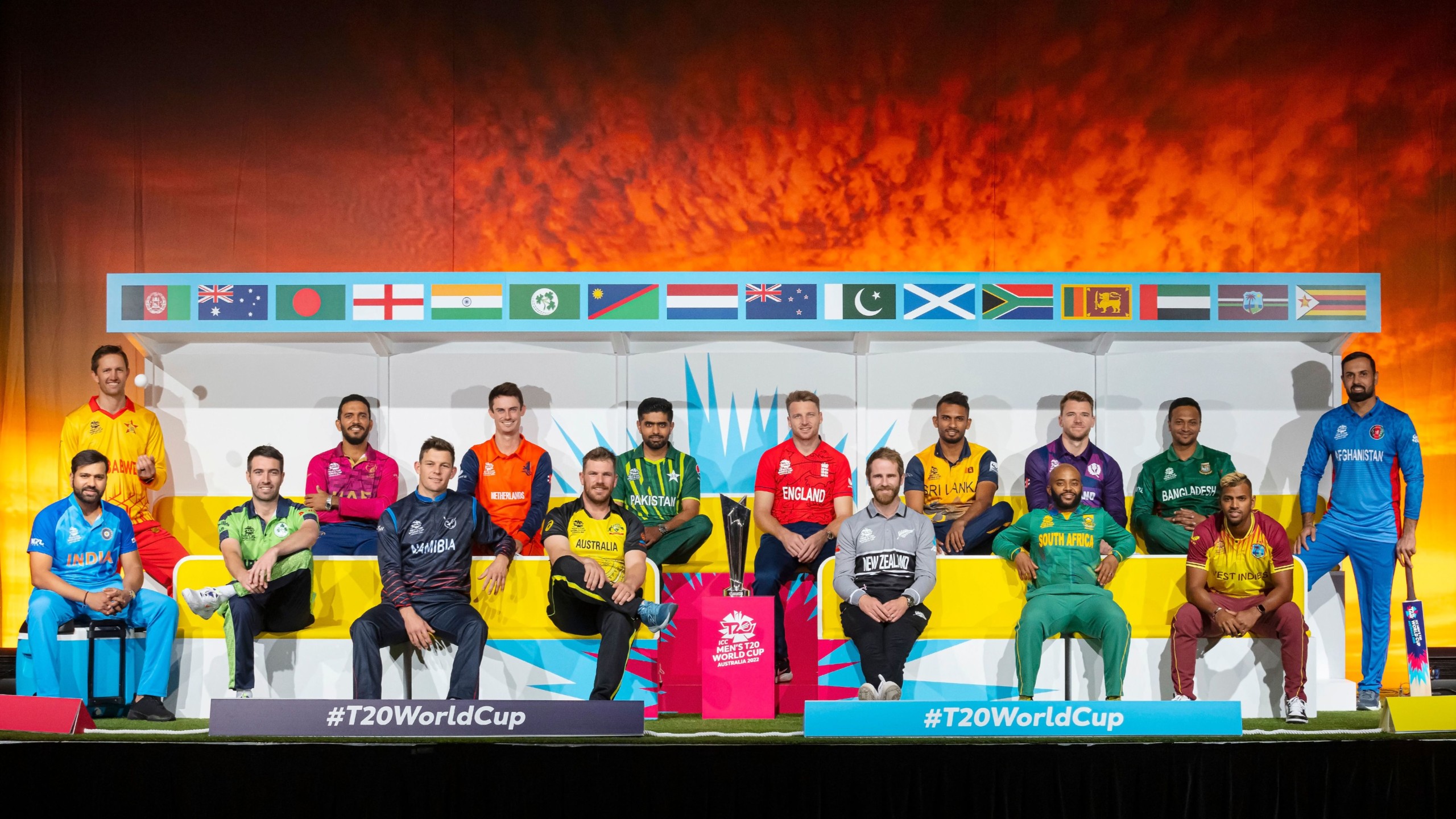 Twenty20 matches often turn on individual brilliance, a batter chasing down a score at one end while losing partners at the other, a key bowling spell that rips the heart from a middle order or that big over at the death that brings 24 runs or three wickets. Each team has its matchwinners and this T20 Cricket World Cup 2022 preview looks at one batter, one bowler and one wildcard from each. Will they deliver on the biggest stage?

Rahmanullah Gurbaz – The 20 year-old wicketkeeper-batter showed his potential with a 84 off 45 balls against Sri Lanka early last month. Five fifties already in his T20I career shows that it was no flash in the pan.

Rashid Khan – The experienced 23 year-old (absurd, I know) will fizz the white ball from his fingers with plenty of pace and variety. Batsmen will look to keep him out and score off the other bowlers, but he’s far too canny a bowler to allow a stalemate to develop.

Darwish Rasooli – A big hitter with little experience and, consequently, little fear. Could he be given a licence to thrill?

Aaron Finch – The defending champions’ captain is struggling for form and experimenting with his place in the batting order, but he will not want to end his career as a loser in front of his own fans.

Adam Zampa – When the big quicks are going off the bat as quickly as they come on to it, the competitive leg-spinner brings control through his accuracy, variations and game intelligence. More interesting off the field than on it, but, if he bowls well, batsmen are reined in.

Tim David – The powerful Singaporean is available to Australia now and might just be the man to come in and take 150 to 200 in the last four overs of the innings. The franchises like him and they’re not often wrong.

Litton Das – Top order batsman who will seek to anchor the innings while the strokemakers play around him. Has the experience to pace a chase.

Shakib Al Hasan – At 35, time is running out for the mercurial all-rounder to gain the honours his talent deserves. As usual, much of Bangladesh’s hope depends on whether he can reach his potential with bat and ball in hand.

Mehidy Hasan Miraz – The bowling all-rounder has been seen up the order recently, which may not be a bad move. Like wicketkeepers, a bowler selected for his primary skill can often find freedom with bat in hand. And never underestimate the value of 30 of 12 balls in T20I cricket.

Jos Buttler – Now indisputably the main man in this format, at 32 the captain has the opportunity to add to his winners medal from the 50 overs format in 2019. But do Englishmen win in Australia?

Liam Livingstone – Both his batting and bowling would benefit from the longest possible boundaries as he has the power to hit the ball out of any ground, but might need protection with ball in hand. Delivers off-breaks and leg-breaks, but neither turn much. Could be a player for the big moments.

Virat Kohli – At 34 in early November, he is not old, but he’s been around so long and been so prominent a figure in the game that one wonders if he has anything left to give in the shortest form of the international game. So long as he isn’t thinking the same thing, he could still be the difference in the clutch moments.

Yuzvendra Chahal – The leg-spinner is full of subtle variations that make it hard to attack him, He also gets through his overs quickly with that disorienting impact on a batsmen seeing a score go from 67-2 off 7 overs to 91-3 off 12 in about ten hurried minutes.

Rishabh Pant – The firecracker could go off at any moment, the confidence pouring through the veins as the ball is hit to every part of the ground with a unique repertoire of shots that gives bowlers nowhere to go.

Paul Stirling – When the mood takes him, he can just stand there and slash and pull boundaries from that very well anchored frame, scoring at a rate that can make any chase look possible.

Josh Little – The left arm seamer offers pace and angle that makes it tough for even set batsmen to line him up.

George Dockrell – He’s been an international cricketer since he was 17, so he’s seen plenty come and go in the green of Ireland, These days, he seeks to influence a match as much with the bat as with the ball.

Gerhard Erasmus – The captain is the class act in a batting order that will have to fire if Namibia are to reach the group stages.

Bernard Scholtz – Namibia’s top ranked bowler, the slow left armer is going to have to be in the form of his life to contain the heavy bats lying in wait for him.

David Wiese – The big man can win matches with bat or ball in hand, but the tournament is probably coming 10 years too late for him.

Colin Ackermann – In July, he and Wiaan Mulder put together an undefeated stand of 477 for Leicestershire in the English county championship. That has little relevance to this World Cup beyond the fact that Ackermann knows how to ride a wave of confidence.

Timm van der Gugten – The Australian-born seamer is a very canny man to call upon, a bowler who can attack or defend and has a temperament that can maintain focus no matter the circumstances.

Bas de Leede – In T20Is, he averages 34 with the bat and 20 with the ball. Such metrics can be misleading, but you don’t generate that kind of differential without the ability to make things happen

Martin Guptill – There are few more destructive batsmen in the game than the tall New Zealander if he gets going. His top scores in T20Is are 105, 101* and 97 scored against Australia, South Africa and Australia again. All bowlers will be wary once he crosses 30.

Lockie Ferguson – An out-and-out fast man, he’ll hope to blow down a few houses but might fall foul of the wides police, who so often seem to want to give the batsman another ball.

Glenn Phillips – A six-hitter who will be past 50 if he faces 25 balls – the challenge is to make sure you get him out before he does.

Babar Azam – Pakistan’s captain is one of the great players in world cricket and has a chance to hold aloft one of the two most prestigious trophies in the game on Australian soil. That would emulate Imran Khan, 30 years on. What more motivation could a man need?

Naseem Shah – If the teenage tearaway can find his rhythm, he can blast out any batting line-up. Like all the quicks in this column, he could easily go for a few too.

Mohammad Rizwan – Having got his start in international cricket relatively late by Pakistan standards, he seems determined to enjoy every second he’s in the middle, on either side of the crease. The kind of attitude that can lift a team – especially when allied to superb invention and power.

Richie Berrington – These are not happy times for Cricket Scotland, so the captain will look forward to the opportunity to add to his only T20I century, scored 10 years ago against Bangladesh.

Josh Davey – A bowling all-rounder, Davey possesses that vital ability to get into a game and affect it.

David Miller – Nobody scores T20I centuries against India in India without having a fully developed white ball game at his disposal. Whether he will face enough balls to turn matches South Africa’s way remains to be seen.

Anrich Nortje – Australian conditions should suit the big quick who is likely to be used as a battering ram in the middle orders, with plenty of deliveries flirting with going over head height.

Wayne Parnell – 49 T20Is in nearly 14 years tells you what you need to know about the stop-start nature of Parnell’s career, but the lefty is back in favour now and nobody’s expecting him to be the next Shaun Pollock any more, so he might just do something interesting.

Pathum Nissanka – A lovely batsman in all three formats of the game, one feels he has a decisive step up in class waiting just around the corner – could this be his time?

Wanindu Hasaranga – The all-rounders leg-breaks have propelled him to third in the ICC bowling rankings and to become a valuable property on the franchise circuit. If he finds the confidence all spinners need, Sri Lanka will trouble the best batting line-ups.

Kusal Mendis – A player of great innings rather than a great player, is this the time when we will see the full flowering of so gifted a batsman?

Muhammad Waseem – The opener has found himself in the top ten of the ICC’s T20I batting rankings – that’s what happens when you average 40+ at a strike rate above 150. But, if the UAE are to progress, he’ll be facing much stronger bowlers.

Junaid Siddique – Recently took a career best 5-13, albeit in a warm-up match against the West Indies. He’ll need to replicate that form when the serious stuff starts,

Chundangapoyil Rizwan – The captain will have a job on his hands because a match can slide away very rapidly in the field. He’ll need to keep his mind clear and get plenty of advice from his trusted lieutenants.

Evin Lewis – Not many can exploit a powerplay like the West Indian opener who hits more sixes than fours. If he comes off, you’ll need to keep your eyes open in the crowd.

Jason Holder – All the experience and class in the world, but this format is much his weakest. Though his batting is always very useful, it’s his bowling that his team needs the most if they are to progress.

Sheldon Cottrell – Never less than a compelling presence on the field, if he can hit the lines and lengths he wants from his left-arm over attack, he can be a very awkward customer indeed.

Sean Williams – Nine fifties in 58 appearances in ODIs speak to his consistency and he’ll need more of the same if Zimbabwe are to progress.

Richard Ngarava – The left-arm opening bowler recently snared both David Warner and Aaron Finch in an ODI en route to registering figures of 4-0-16-2, albeit in a heavy defeat.

Sikandar Raza – He first played List A cricket 15 years ago and has since brought his all-rounder skills to a dizzying array of clubs and franchises. He’ll need to channel all that experience to make Zimbabwe a force in the tournament.