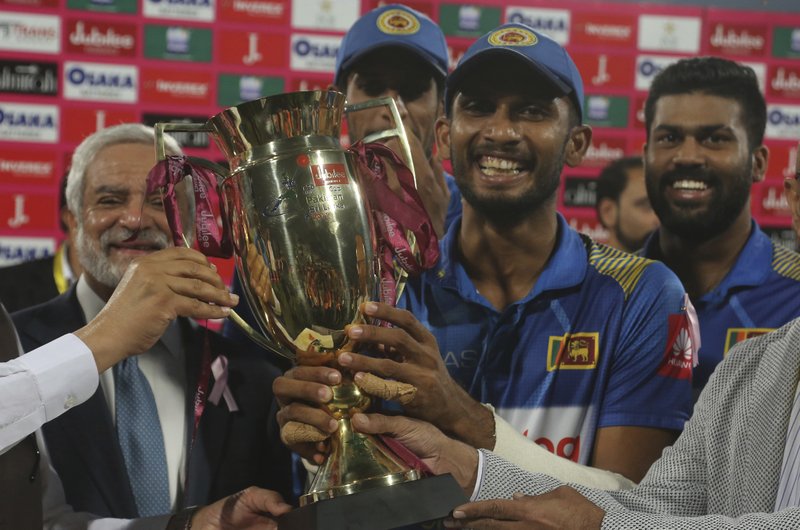 “They beat us in every department of the game,” Misbah said after Sri Lanka won the final Twenty20 by 13 runs on Wednesday night.

“It’s an example for us the way they have beaten us in every department and it’s an eye-opener for everyone,” the head coach said.

Related: Watch highlights of the entire T20I series between Sri Lanka and Pakistan

Sri Lanka easily won the first T20 by 64 runs and the second game by 35 runs.

“They won the games in almost one-sided fashion leaving us in tatters and with lots of questions to answer. We played very poor cricket and definitely it’s my responsibility,” Misbah said.

“Everything is the same (in our planning) but the difference was our performance on the ground,” Misbah said. “We have to regroup and stand together again and it will be good if we get our momentum back as soon as possible.”

Pakistan has topped the rankings for almost two years but its form dipped drastically against Sri Lanka, which lacked top players Lasith Malinga and Angelo Mathews.

It was Misbah’s first test as head coach and chief selector since Pakistan gave him the dual role. The Pakistan Cricket Board didn’t renew coach Mickey Arthur’s contract following the World Cup earlier this year.

Pakistan failed to chase the target against Sri Lanka in all three T20 games.

“If you want to put responsibility on me you can but in this brief time since I took charge, how big a difference could I make with my coaching?” Misbah asked.

Seasoned batsmen like Fakhar Zaman, Babar Azam, allrounder Imad Wasim and leg-spinner Shadab Khan all failed to excel with either bat or ball in the series and captain Sarfaraz Ahmed looked out of sorts to lead the team from the front.

Left-handed Haris Sohail scored a half century on Wednesday after being ignored for the first two games. Pakistan had experimented by recalling Umar Akmal and Ahmed Shehzad, but both failed in the first two games before they were dropped.

Report by Rizwan Ali for the Associated Press