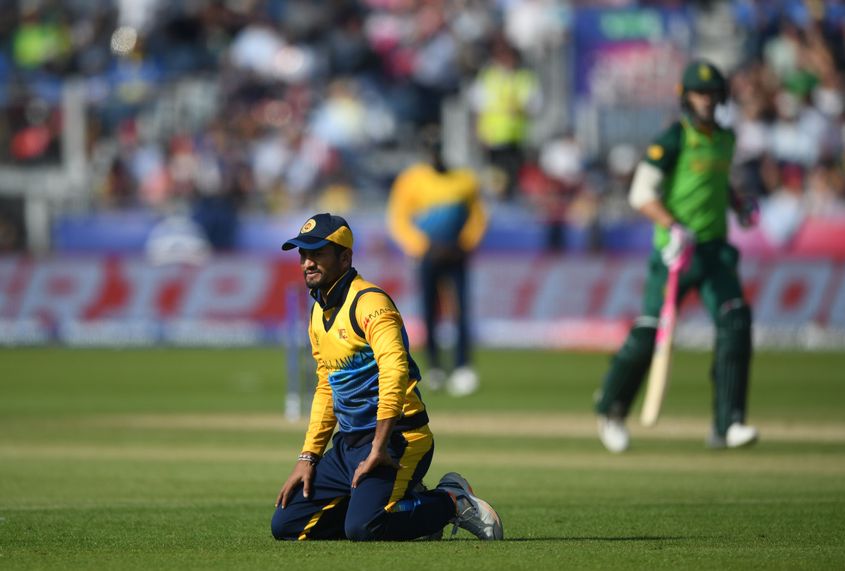 Sri Lanka captain Dimuth Karunaratne was frustrated at his side’s inability to rotate the strike after their semi-final hopes were left hanging by a thread in Durham on Friday.

In a must-win ICC Men’s Cricket World Cup clash with South Africa at Chester-le-Street, Sri Lanka fell to 203 all out and Faf du Plessis and Hashim Amla guided the already-eliminated Proteas to a nine-wicket win.

Kusal Perera and Avishka Fernando laid a decent platform in the first powerplay, but thereafter no batsmen kicked on as the innings ground to a halt.

Sri Lanka, who shocked England so spectacularly in Leeds last week, must now beat West Indies and India in their final two games if they are to stand any chance of making the final four.

But even then, they will need England, Pakistan and Bangladesh’s results to go their way and skipper Karunaratne admitted his side only had themselves to blame.

“It was a must win game for us, it was a pretty good wicket and we couldn’t get a good total on the board,” he said

“I think the disappointing thing was Avishka and Kusal batted really well, but we couldn’t rotate and there were a lot of dot balls. Those are the main things why we ended up with 200 runs.”

And Karunaratne, who himself was dismissed with the first ball of the match, admitted his side must learn from the way du Plessis and Amla went about the chase.

Sri Lanka are back in action here on Monday against the West Indies and need two wins from two to keep their semi-final hopes alive.

“Faf did a great job, he put all the fielders in the right places, made us go for big shots,” added Karunaratne

“After the powerplay until the 27th over, they only put two fielders outside and put good pressure on us. We were going for the big shots and that’s why wickets were falling. The wicket was getting better and better in the later part.

“If you get a start you have to go for a big one. Faf and Hashim batted really well in a tough period then when you get set, you have to keep batting and batting. Once they were set they didn’t go for big shots, they kept rotating the strike. That’s what I expect from my batsmen.”

“We have to win our two matches, compete really good,” Karunaratne said. “We have to work hard at the batting, bowling and every department and do well in those matches.”