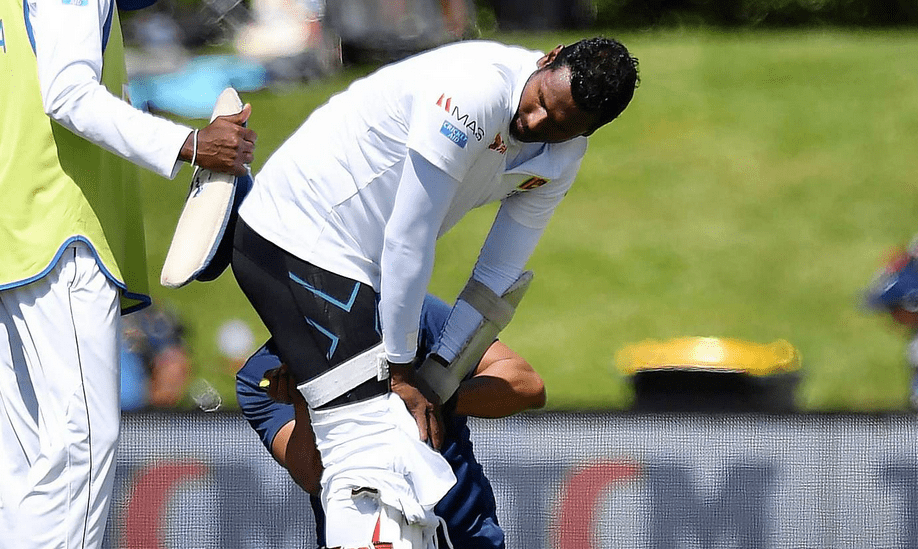 Sri Lanka fought hard to extend the second Test to a fifth day but Angelo Mathews sustained a potentially serious injury and received treatment to his hamstring region and is unlikely to bat again.

New Zealand require just four wickets to win on the final day, with wickets falling regularly after the tea break on day-four, and they are headed for 1-0 series victory in the two-match series.

The pick of the New Zealand bowlers was Neil Wagner who claimed 3-47 from 28 overs.

After his heroics in the first Test, it looked as though Kusal Mendis was set to do the same today when he resumed his innings with Sri Lankan captain Dinesh Chandimal.

Mendis was the more attacking of the pair in the morning session, just as he had been in the first Test. Chandimal contrastingly was cautious against the short ball and was not tempted into hooking the ball whenever Wagner was brought on for a barrage of bouncers.

Mendis fluently reached a fighting and entertaining half-century shortly before the lunch break, with Chandimal alongside him unbeaten on 33 with the score at 89/2.

After the lunch break, the pair brought up their century stand, with Mendis surpassing 1000 Test runs in the calendar year and becoming the second-highest Test run maker in 2018.

Batting seemed easier with the sun out and the cloud cover gone, and Chandimal too brought up his 50.

Just as thoughts of another great escape might have been entering the minds of the Sri Lankan dressing room Wagner struck, removing Mendis for 67.

Mendis departed after a number of short balls was followed by an enticing full toss, which he drove to the waiting hands of substitute fieldsman Matt Henry who took an excellent low catch diving to his right at cover.

So the way Angelo is hobbling … I guess we won’t see him in Australia or South Africa. Now that’s not going to help at all

Mathews then joined Chandimal at the crease and showed the same ease he had all tour.

In a series where Mathews has struck scores of 83, 120 and 33 not out, he would have been vital to another hard-fought draw but Sri Lanka’s hopes of that outcome were struck a serious blow, when Mathews injured his hamstring attempting to take a close second run. He was able to negotiate the short period before the tea break but, at the resumption of play, he had been sent to hospital.

With Mathews retired hurt Chandimal was joined by Roshen Silva, and shortly after, the Sri Lanka Test skipper fell to a Wagner bouncer, fending a short ball to Henry Nichols. His stay had lasted 228 balls and his 56 contained five boundaries, as he looked to play within his limits and occupy the crease.

Silva’s new partner Niroshan Dickwella (19) fell not long afterwards, bowled by Wagner before Silva (18) himself was caught by BJ Watling off Wagner, attempting to flick him down the leg side.

Dilruwan Perera and Suranga Lakmal managed to survive the remaining eight overs until stumps were called. The pair are currently sharing a 23-run partnership, with Lakmal not out on 16 and Perera on 22, but they will almost certainly need to rely on a surprise storm or two if Sri Lanka are going to make it out of the series with another draw.