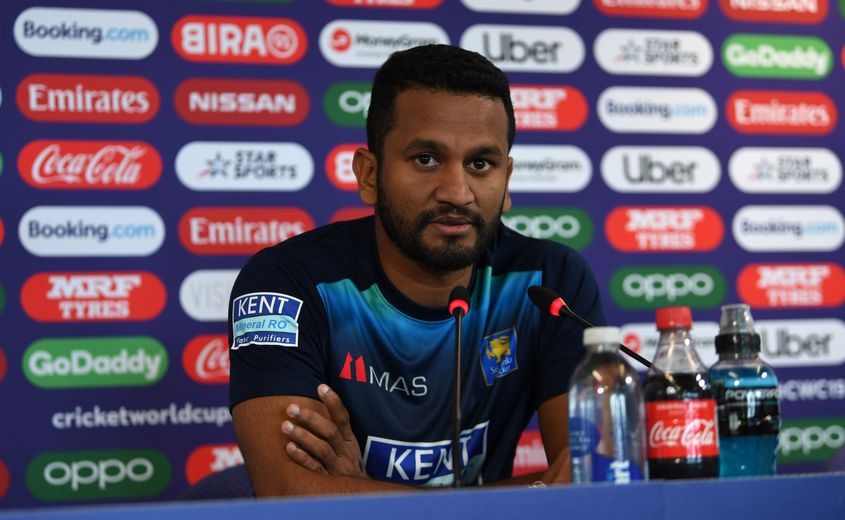 Dimuth Karunaratne has labelled England the best players of spin at this World Cup – and admits Sri Lanka will have to think outside the box if they are to halt the hosts’ charge on Friday.

England took Rashid Khan and Afghanistan apart earlier this week at Old Trafford, Eoin Morgan the tormentor in chief as Khan was dispatched for 110 runs from only nine overs.

England crashed 25 maximums in total off the Afghans’ spin-heavy attack and are now at Headingley preparing for Friday’s clash against Sri Lanka.

Karunaratne’s troops must win to keep their knock-out hopes alive but England have won six in a row in Leeds and broke the ground ODI record earlier this summer against Pakistan.

And while Imran Tahir and Shadab Khan had some initial success with spin in the first powerplay against England, Karunaratne and Sri Lanka might have other plans up their sleeves.

“England is the best batting line-up against the spinners in the world,” admitted the Sri Lankan skipper.

“If you take the Asian countries, I think England are playing even better than them. We must think about it, check the ground and what combinations will we use against England?

“Will we go with two spinners, or an extra batsman and fast bowler? That is what we are discussing at the moment.

“We know that we need to restrict them to less than 300, we have a couple of plans against the batsmen and we will try to use them in the middle.

“Everyone in their batting line-up is dangerous, they are explosive and can change the game.

“We are taking every one of them seriously. And have a plan for each and everyone and hopefully it will work in this game.

“We will have to think out of the box and that is what we have been doing over the last few weeks.

“We had a home series against them before with them, so we have a couple of ideas and we need to work them out in the middle.”

Sri Lanka lost that home ODI series against England before Christmas, but won the final clash in Colombo which will give them hope on Friday.

With the bat, the top order has fired as Karunaratne and Kusal Perera have combined for four half centuries already this World Cup.

But the middle order is yet to launch, and that cost them dearly in defeat to Australia after a lightning quick start.

“In our batting line-up, in the middle, we have to take some responsibilities. If England have scored more than 300 then we have to go for it,” he added.

“Mentally we have to prepare. The middle order have a lot of talent and did really good things for Sri Lanka in the recent past.

“We need them to come in with a good mindset, that is the key thing when you are playing against a good team.

“There is no point talking about the past, we know what happened in the last four matches and the key areas – we need to look forward and prepare for the England game. We need to play positive cricket.”

Sri Lanka face England in their next World Cup match on June 21 in Headingley.