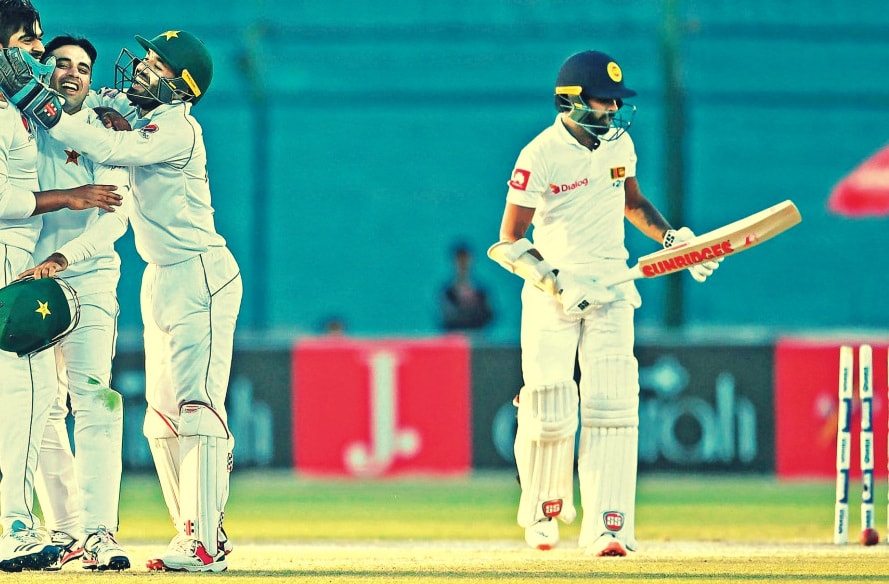 Ashantha de Mel, Sri Lanka’s team manager and chief selector, has chastised Niroshan Dickwella, Angelo Mathews and Dinesh Chandimal for their performances in the second Test in Karachi, which Sri Lanka lost by 263 runs this week to concede the two-match ICC World Test Championship series 1-0 to the hosts.

There was also scrutiny of the batting techniques of Kusal Mendis and Mathews by de Mel, who said both players had technical flaws.

“When you bowl a side out for 191 you can’t get 270, you must put up something like 450 plus on the board,” de Mel lamented in an interview with Sri Lanka’s Daily News.

“We could have easily batted that one and a half days. I didn’t see anything wrong with the pitch. For the time they had on their hands I actually thought we could chase the target of 476.”

Sri Lanka’s chief selector was incensed by Dickwella’s shot selection at a crucial period in the Karachi Test.

“Look at the way (Niroshan) Dickwella got out,” he said. “I told him you have 35 Test matches under your belt and you have never scored a hundred.

“He goes and plays a reverse sweep after scoring 65. At least make a fight and take the match till the end. If he scored a double hundred on that day we might have had a chance to win. How many shots he was playing?

“When did Angelo score his last hundred? In New Zealand in December 2018. When did Chandimal score his last hundred, in West Indies in June 2018. He (Chandimal) batted well in the first innings, but scoring 74 in these kind of games is not going to serve the purpose, unless you bat and put runs on the board you can’t defend. We don’t have a world beating bowling side.

“A person like Dhananjaya (de Silva) scored a hundred. He gives a catch to the previous ball and next ball he plays a loose shot and gets out […] It’s the mindset, it’s all wrong. They’ve got to know how to build an innings and have patience. Test cricket has a lot of aspects not only your talent, how to apply yourself. See how the Pakistani batsmen batted. During difficult times they hung in and they ran well and rotated the strike.”

“What the coach wants is excellence,” de Mel said. “You can’t have these performance of scoring in one game and going on that laurel for the rest of the series.

“They are comfortable just cruising along with mediocre performances and the coach has emphasized that very strongly. They have to be told if you are mediocre you will not play. That kind of message must go through.”