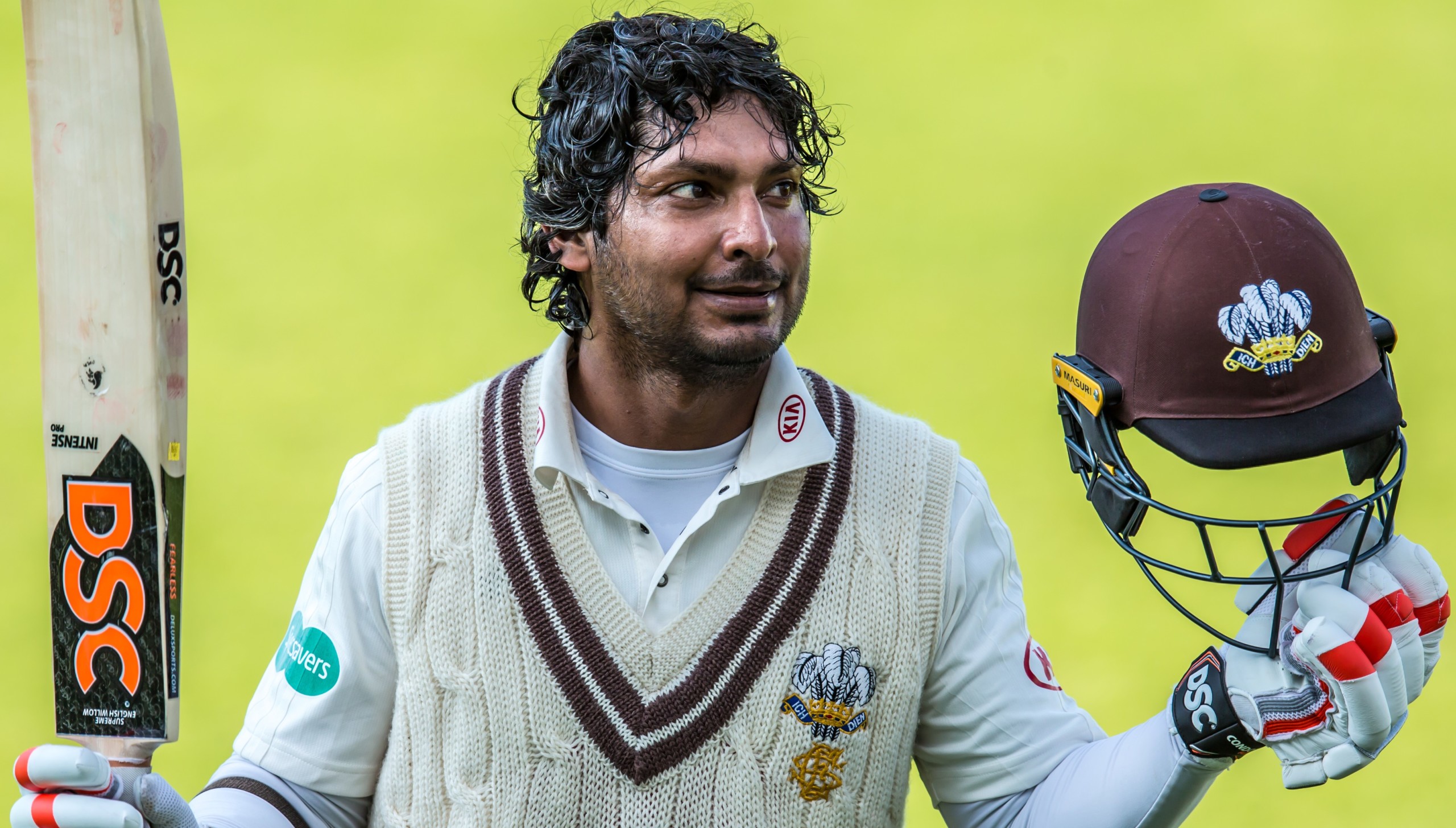 Kumar Sangakkara walks off after his last innings in first-class cricket during day four of the County Championship match between Surrey and Somerset at The Oval on September 22, 2017. © David Rowe/Alamy Live News

It’s almost perverse to begin an appreciation of Kumar Sangakkara with something as prosaic as mere numbers — but, with numbers like these, you just have to. In his final season of first-class cricket, Sangakkara scored 1491 runs in Division One of England’s County Championship at a Bradman-busting average of 106.5. Despite missing four matches (he was busy compiling the second-highest aggregate in the Caribbean Premier League), that mountain of runs proved a clear 335 ahead of the field, in which only Surrey team-mates Mark Stoneman and Rory Burns broached four figures. Amongst opponents, only Hampshire were spared the bittersweet pleasure of witnessing a century, as bowlers, generally operating in favourable conditions at the beginning and end of the summer, were dominated with the silky steel that has defined the Sri Lankan’s batting for two decades.

At Surrey, an all-time great of the game in his final season demanded no privileges (he kept his hand in with a bit of white ball wicketkeeping) and could even look a little anonymous in whites on The Oval’s metropolitan expanse of green, just one of the lads. Though fit as a fiddle in his fortieth year, he is no six-foot-plus giant with gym-honed muscles bulging under tight-fitting kit and he favoured (unlike Kevin Pietersen who played a couple of T20 matches alongside him in his last season, all puffed out chest and Warner-esque body language) a purposeful rather than posey stride to the crease; guard taken and the bat raised a little higher in the stance than we have come to expect. But then…

You didn’t need to look — although, of course, we all did, avidly. Through the often-chilly damp air, the ball cracked off the bat with a sound full of the subcontinental sunshine of his youth, its pitch a function of the timing of the stroke, its volume an indicator of the acceleration of hands through the ball, effort applied only as required. If short, the delivery was pulled or cut as line suggested. If full, driven through the covers, the front leg slightly bent or clipped from the toes square or behind the wicket. And if on a good line and length? A fair few of those were despatched too because, well, because he could.

Though the old gasometers and grey concrete of South London has precisely nothing of the majestic beauty of the fort that presides over Galle (where I saw the great man get a golden duck courtesy of Jimmy Anderson in 2012), The Oval seemed a good fit for the man from Kandy. London feels less and less like a city of the United Kingdom these days: its population tracing roots all over the globe, its inclusive cosmopolitan politics out of step with Brexit Britain, its mayor a cricket-loving Muslim whose hero is Javed Miandad and who had trials at The Oval as a teenager. There is no city better suited for the man who grew up in the midst of a civil war and survived a deadly terrorist attack in 2009, but who chose to finish his Spirit of Cricket Cowdrey Lecture (2012) with these words: “I am Tamil, Sinhalese, Muslim and Burgher. I am a Buddhist, a Hindu, a follower of Islam and Christianity. I am today, and always, proudly Sri Lankan.”

It’s probably too simplistic to ease into what might be termed the mythology of Sangakkara (though, in a world desperately in need of statesmanship, the prospect of his retreat to private life is almost painful to contemplate) burying his cricket beneath the articulate, dignified, glamorous sheen of a man of the world. But what alchemy produces a player who, half a world away from home and in early middle-age, bestrides domestic English cricket in 2017 like no other, miles ahead of his “peers”?

The boy, as ever, is the father of the man, and this boy grew up in Matale, near Kandy, nestling in the hill country of the teardrop island, a place in which the colonial 19th century mixed with sectarian 20th century in a heady, edgy, broiling brew. There he received the tough (well, toughish) love of his father, Kshema (who was still dispensing it in 2015) and an education that, taken together, instilled a fierce desire to explore his talents to their very limit. We also see the seeds of his humanitarianism too (a necessary tempering of the monomania that top-level sport demands and which, too often, leads to burnout) with his childhood home used to shelter Tamils under threat at the height of the civil war, the parents of the kids with whom the boy Kumar played hide and seek.

Though his great friend, Mahela Jayawardene, was the prodigy with bat in hand destined for greatness, once Sangakkara left tennis and schoolboy rugby on one side to concentrate on his cricket, he progressed quickly, as players do in Sri Lanka, to national colours, making his debut at 22 in Galle as Sri Lanka crushed a powerful South Africa side by an innings. In that series, Arjuna Ranatunga’s last, Sangakkara was a failure in front of the stumps, but a success behind them, as he set out on his journey from competent wicketkeeper-batsman to very good wicketkeeper-batsman and on to all-time great batsman, listening and learning about the controlled aggression top-flight cricket demanded and seeing the importance of never taking a backward step, something Ranatunga had hammered into a side of hitherto soft touches.

All that cricket and life experience produces a singular man, a man with the perspective to know that cricket matters because it is what he has chosen to do, right here, right now and, as his father told him in his Matale garden and at Lord’s, he must therefore do it to the very best of his abilities. And, lest we forget as another four zips over the outfield, or the bat is raised yet again in acknowledgement of century, just because it looks easy, doesn’t mean it is easy. If it were, we’d all do it.

Professionalism’s trifecta of attitude, preparation and standards rubs off on young cricketers and the steps made by Surrey’s players in 2017 have been recognised by England’s selectors. If Mark Stoneman, who will open the batting for England in Australia, wanted to know how to manage the concentration long innings require, he need only look 22 yards down the pitch. If Ben Foakes, also selected for the Ashes Tour, wants to know what demands are placed on a wicketkeeper who is also expected to contribute 80 runs per Test match, he need only ask the man who did that in 48 matches over a nine-year span. If Amar Virdi, the teenage Surrey spinner selected for the England Lions winter tour wants to know about slow bowling around the world, he can ask the man who played 77 Tests with its most prolific exponent. And, if they are able to listen to a man who, like Rahul Dravid, speaks in paragraphs rather than sentences, they will have learned much about the next level of cricket and have now been granted the opportunity to prove it.

But the last word goes to the man himself, a player with nothing to prove, who could have lived the high life in a city that offers unrivalled distractions for a man of cultured tastes, picking up easy money on flat pitches with cameo 40s, then fielded with his hands kept warm in his pockets in his valedictory season. He didn’t — he gave his all — and perhaps this quote, from an interview with ESPNcricinfo last month, tells us why,

“The county professional is a very, very special breed of person and I’ve found a completely new respect not just for county cricket but for the game as a whole. To understand that wherever there is first-class cricket, the pride with which they play this sport, the pride in which the club supports the players and the pride with which the fans come and embrace those players, it’s something that suddenly hit me and it hit me once I retired from international cricket. I regret that but I thank Surrey for allowing me to rediscover that immense love and passion that first-class cricket and cricketers have for this game, and what an amazing breeding ground it is for players.”