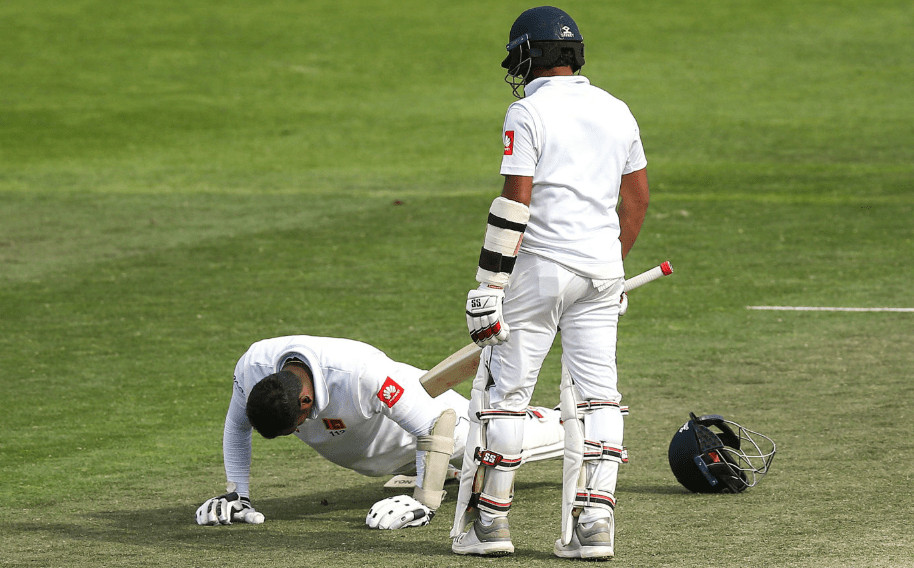 Angelo Mathews sent a strong signal to his critics on day-four of the first Test against New Zealand. When Mathews brought up his century in Wellington on Tuesday, he celebrated the achievement by doing a series of push-ups on the turf of the Basin Reserve.

Mathews, who averages above 40 with the bat in both Tests and ODIs, struck a match-saving 117 not out from 293 balls after arriving at the crease with Sri Lanka in danger of an innings loss at 13/3 late on day-three.

He featured in an unbroken 246-run stand with Kusal Mendis to see the team to safety by the end of the fourth day and, in doing so, Mathews brought up his ninth Test century. It was his first century against New Zealand, and his first Test ton since December last year, when he scored 111 against India in Delhi.

Mathews and Mendis also set the record for the highest partnership for Sri Lanka against New Zealand in Tests. They had, by stumps, reduced New Zealand’s lead to 37 and displayed remarkable resolve and dedication to bat as long as they did under immense pressure.

Mathews began the day in a sedate manner, playing the short ball along the ground and opting for singles, while Mendis played attacking strokes at the other end. After tea, Mathews began to use the pull shot aggressively and struck boundaries off Trent Boult and Neil Wagner who finished the day with 0-100.

Mathews, who stepped down from captaincy in July 2017, was re-appointed limited-overs skipper in January of this year and fired in September after the Asia Cup.

He was also dropped for the ODI series in Sri Lanka against England in October, leading him to pen an official letter to the cricket board, stating he felt “betrayed and let down” for being made the scapegoat for Sri Lanka’s poor Asia Cup performance.

At the time, Sri Lanka’s head coach Chandika Hathurusingha and former chief selector Graeme Labrooy, who was recently sacked, justified their decision to drop Mathews from the ODI side and strip him of captaincy by telling a gathering of reporters in Colombo that Mathews held a world record for run-outs and his physical condition was unsatisfactory.

All of this is likely the catalyst for his unusual celebration in New Zealand.

With a handful of matches left until the World Cup, Mathews — a vital cog in Sri Lanka’s batting line-up in all formats — has again been selected in the limited-overs squads by a new selection panel who took over last month.

The new chairman of selectors Ashantha de Mel has said his panel has no concerns over Mathews’s ability to run between wickets or his fitness.