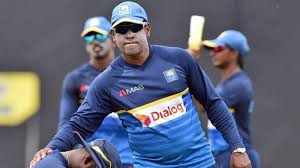 Blunder, mess, mistake—these were some of the terms used by Sri Lankan pace legend Chaminda Vaas to describe the instability in Sri Lankan cricket as well as the economic and political turmoil that has engulfed the island nation.
Sri Lanka has plunged into its worst economic crisis with an acute shortage of even daily essentials. It led to public protests against the administration that resulted in the resignation of Prime Minister Mahinda Rajapaksa earlier this month. Many current and former Sri Lanka cricketers—from Mahela Jayawardene, Kumar Sangakkara and Bhanuka Rajapaksa on social media to the likes Roshan Mahanama and Marvan Attapattu on the streets there—have spoken up. Vaas did too here on Wednesday.

“I’m not actually into politics but this issue is a bigger mess in Sri Lanka,” Vaas said on the sidelines of a coaching clinic with kids at the Mumbai Cricket Club and Jwala Sports Foundation. “What I see is the mistake our politicians had done in our country. The benefit has gone to them many times, while the people of Sri Lanka are suffering. It’s time to change everything and have the best people and best governance in the country and do something for the future.”