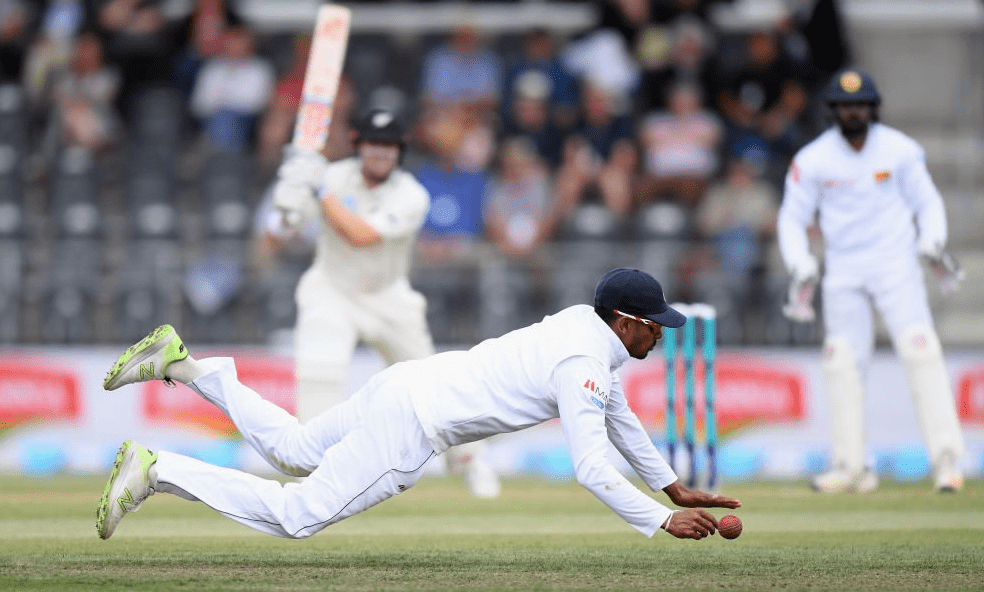 Sri Lanka endured a torrid time on the field as New Zealand piled on 585/5 in their second innings before the visitors fell to 24/2 in their reply at stumps on the third day of the second Test in Christchurch.

The two-match series is currently drawn at nil-all and Sri Lanka will need to bat for two days to survive on a Hagley Oval pitch that has so far mostly-troubled only their batsmen.

Tom Latham (176) and Henry Nicholls (162*) made Sri Lanka’s bowlers and fielders toil hard, while Colin de Grandhomme played a key role by setting a new record for the fastest Test 50 by a New Zealand batsman and went on to make 71 not out from only 45 balls.

Earlier in the day, Sri Lanka had an LBW review narrowly turned down against Latham but struck shortly afterwards when Ross Taylor was LBW to Lahiru Kumara for 40 off only 44 balls. It would be an age before their next breakthrough, as Nicholls and Latham dug in for 145 overs. Latham looked at ease and was immovable at the crease once again.

Sri Lanka tried the medium-pace of Dimuth Karunaratne and the spin of Dilruwan Perera on a pace-friendly wicket, but nothing was enough to stop Latham reaching his second century of the series. It was his eighth Test ton, putting him ahead of Glenn Turner as second on the list of New Zealand openers and behind only John Wright who scored 12 Test hundreds.

Latham finally fell for 176, when he feathered an edge behind to Niroshan Dickwella off Dushmantha Chameera but, by that stage, it was time for the tea break and New Zealand had extended their lead to a mammoth 539; the agony was yet to come for the Sri Lankan bowlers however.

After tea, the visiting attack was pummelled by Nicholls and de Grandhomme who took a mere 28 balls to bring up his record half-century, smashing six boundaries and two over the ropes on his way to an unbeaten 71. Nichols in the process registered his highest Test score, with his unbeaten 162 studded with 16 fours and coming at a measured strike-rate of 72.

New Zealand captain Kane Williamson declared with his side 660 runs in front.

It took only one over for his famed new ball pair of Tim Southee and Trent Boult to strike, with Karunaratne getting the faintest of edges behind to BJ Watling down the leg side.

Karunaratne’s was the wicket New Zealand had wanted, as on his previous tour to New Zealand in the 2014-15 season he had scored 152 in the second innings when Sri Lanka was in a similar position at the same ground. His opening partner Danushka Gunathilaka fell driving a wide full delivery, dismissed edging a flashy and irresponsible drive off Southee to Watling.

Questions will be asked of Sri Lanka’s opening batsmen, whether they batted with the determination required under the circumstances.

Kusal Mendis survived the rest of the day with his captain Dinesh Chandimal. The pair offered a few chances to the New Zealanders in the remaining 11 overs though, with Chandimal almost bowled off a tight leave from Southee.

Sri Lanka will resume their innings tomorrow morning at 24/2 and 636 runs behind their victory target.