Sri Lanka’s two most-experienced batsmen have saved them serious blushes on the opening day of the first Test against New Zealand.

Sri Lanka slumped to 9/3 on a green Wellington wicket just half an hour into the Test, but former captain Angelo Mathews and current vice-captain Dimuth Karunaratne patiently added 133 for the fourth wicket before wicketkeeper Niroshan Dickwella, currently unbeaten on 73, batted competently with the tail and launched a stunning counter-attack to ensure Sri Lanka finished on 275/9.

The hero for the hosts Tim Southee did the early damage and finished the day with 5-67 after New Zealand had opted to bowl when skipper Kane Williamson won the toss.

In the side after a strong innings in the tour match, Danushka Gunathilaka was the first to go — he fell LBW for one, missing a Southee delivery that swung back in and straightened.

Dhananjaya de Silva (1) edged a peach to wicketkeeper BJ Watling before Kusal Mendis (2) dug Sri Lanka further into a hole, attempting an audacious lofted on-drive that fell straight into the waiting hands of one of only two fielders on the leg side.

Even after Mathews and Karunaratne had steadied the ship, Sri Lanka’s lunchtime score of 73/3 still didn’t mean they were in the clear.

But it could have been far worse, if not for a substantial error from medium-pacer Colin Degrandhomme in the 20th over. He had Karunaratne caught at mid-wicket off a rank full toss but quickly discovered he had overstepped.

A potentially disastrous score of 56/4 became 142/4 then, when Karunaratne was finally dismissed nearly 100 runs later. 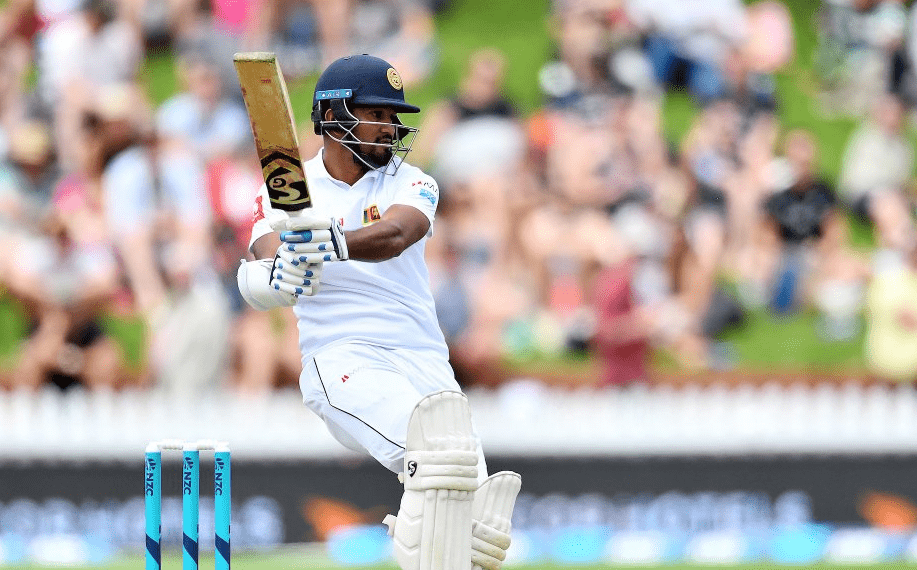 Mathews and Karunaratne had, at that stage, settled in well after the lunch break. Boundaries started to flow with regularity at this point, and it became harder for the New Zealanders to dislodge them.

In the end, it took a ripsnorter of a delivery from New Zealand’s go-to partnership breaker Neil Wagner to do it.

Hitting the deck hard, Wagner dug in a bouncer that Karunaratne attempted to pull, but he only succeeded in gloving it to Watling down the leg side. On the verge of a big innings, Karunaratne departed for 79 and opened the door for New Zealand to create further inroads.

They did so not long after the tea break, with Dinesh Chandimal and Mathews both also falling to short balls, this time from Southee.

Skipper Chandimal fell irresponsibly to the short-ball trap and was caught by Patel on the boundary at deep square-leg, while Mathews’s dismissal was almost a carbon copy of Karunaratne’s departure, as he edged a bumper to Watling to depart for 83.

At 187/6, a premature end to Sri Lanka’s innings seemed to be coming.

Dilruwan Perera and Dickwella then established a partnership, adding 36, but the former fell attempting an expansive drive off de Grandhomme, just as the pair should have been consolidating.

Suranga Lakmal was undone by another brutal bouncer from Wagner, as New Zealand’s hero in the UAE Henry Nichols pulled off a spectacular diving catch at bat-pad to leave Sri Lanka on the ropes again at 240/8.

🗣“We know we’re up against world class bowlers, so we had to put in a lot of hard work to get to where we are.”

Dickwella then came to the fore, unleashing his full range of strokes without being unduly careless. He struck his 73 off only 91 balls, including 10 fours.

As New Zealand took the new ball, Dickwella farmed much of the strike away from the tail, while Kasun Rajitha ably faced 32 deliveries at the other end.

Rajitha eventually edged behind to Watling, to at last grant Trent Boult, who had earlier looked as though he would endure a rare wicketless day, some reprieve.

Sri Lanka will begin day-two at the Basin Reserve with one wicket remaining and Dickwella at the crease with Lahiru Kumara.