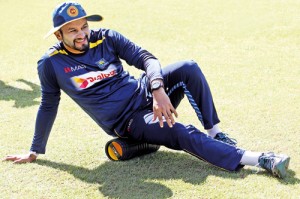 The proposed ban on the age-old practice of using saliva to shine the ball may make cricket dull and boring, says Sri Lanka cricket Test and ODI skipper Dimuth Karunaratne. He urged cricket administrators to find an alternative other than sweat to find a balance between the bat and the ball.

The ICC cricket committee, led by former India captain Anil Kumble, recently pushed for a ban on the use of saliva to combat the coronavirus threat. The cricket committee’s recommendation will be presented for ICC board’s approval in early June.

The committee which also includes Sri Lanka’s current head coach Mickey Arthur has debated allowing the use of artificial substances like vaseline or mint to shine the ball. However since the use of any artificial substance on the ball amounts to ball-tampering under the existing laws of the game, the committee had felt bending the rule right now would lead to complications.