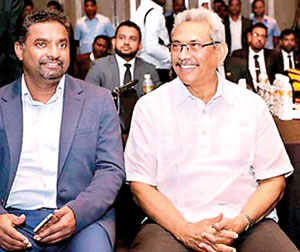 The ever charming Muttiah Muralitharan of international cricketing fame had been invited to speak at the annual convention of Viyathmaga, described as a think-tank of a putative presidential candidate Gotabaya Rajapaksa. Viyathmaga means, the Way of Intellectuals, but Gotabaya’s opponent Finance Minister Mangala Samaraweera has dubbed it as the ‘Vipathmaga’ — the Road to Disaster. What Murali’s interest is in Rajapaksa politics and Gotabaya’s ideologies, we are so far not aware of and why he was featured as a star speaker at the inauguration is baffling. Nonetheless, Murali, some news reports said, had bowled a political ‘Doosra’ like his cricketing ‘Doosra’ which many leading batsmen had not been able to read and come a cropper, making him the world’s leading wicket taker in Test Cricket.
0
SHARES
ShareTweet