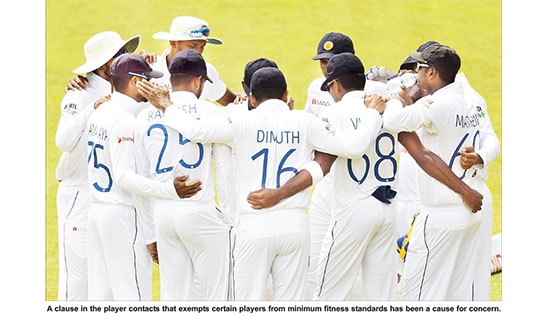 Although there’s been much hype about the new contracts national players are supposed to sign with a lot of stress on fitness, The Island learns that the contracts in fact are flawed with loopholes which can be manipulated by interested parties.

It has been brought to our notice that a certain clause in the contracts says that a player can be exempted from fitness tests if the selectors think so.

The clause it is said has been included to benefit a former fast bowler who had a disastrous stint as national captain. Reputed to have employed mean tactics to get the captaincy, the fast bowler received little support from the team and was eventually removed.

However, with the top brass of the national cricket team including skipper Dimuth Karunaratne and former captain Angelo Mathews axed from the ODI side, path has been created for the misfiring fast bowler to make a return to the side and possibly even captain again…