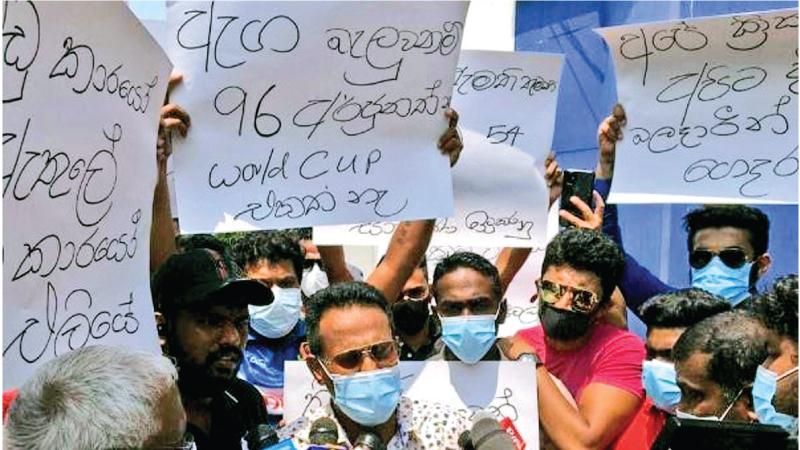 With no projected guidance, management or direction, the cricket establishment in Sri Lanka now finds itself faced with the most dreaded nightmare, a people’s revolt against the dropping of Bhanuka Rajapakse from the T20 tour of India.

Rajapakse’s disputed dumping only begs the question of whether Sri Lanka Cricket (SLC) and its team selection committee found an excuse behind the so-called physical fitness test to grind an axe against the southpaw who threw in the towel and walked away two months ago at a time he got back into run-making overcoming a lean period.

To-date no one in the common public knows the inside story why Rajapakse quit the scene other than speculate with pointed fingers at some self-styled lily whites or holier-than-thou guardians at SLC.

A mismanaged professional like most Sri Lankan players, Rajapakse quit the scene after captaining a franchise team at the Lanka Premier League (LPL) in December and now finds himself wanted by world cricket’s powerhouse India for the unmatched IPL show while his own country has rejected him.

But what has now became public knowledge is that the former Royal College captain was slapped with a raw deal after he was persuaded by none other than the country’s Sports Minister Namal Rajapakse to return to the fray only to be shown the door in what analysts see as a tit-for-tat snub.

There was nothing to hold back, not the players from a revolt against annual pay contracts, but the main stakeholders of cricket, the paying public, from venting their anger against SLC over the chopping of Rajapakse in enlightened street scenes that has made the sport no longer a gentleman’s pride.

It marked the first time that people power surrounded the headquarters of Sri Lanka Cricket in large numbers challenging Rajapakse’s ouster with claims that the team would never have won the World Cup in 1996 if the roly-poly Arjuna Ranatunga had been subjected to a similar fitness test.

Their public comments exposed the short-sighted television pundits pontificating cricket and its administration in the country.

But speaking on behalf of the selectors and SLC with cricket taken to Parliament for the second time in a year, Minister Rajapaksa ironically defended cold-shouldering cricketer Rajapakse.

“The team to India has been selected according to the requirements of the selection committee and coach and he (Bhanuka Rajapakse) has been made aware of the reasons for his omission from the team. But it is not the end of his career and he can make a comeback,” said Minister Rajapaksa.

Challenging his persecutors and nudging rights activists, Bhanuka Rajapakse declared on social media: “You can do with yourself only what is possible with yourself.”