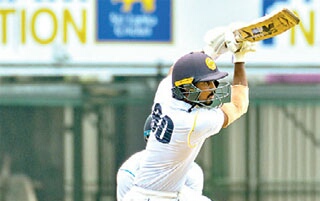 The top of the table clash between Kandy and Colombo was evenly poised at the end of day one of the National Super League four-day tournament at the R. Premadasa Stadium yesterday.

Table leaders Kandy, after winning the toss and deciding to bat first were dismissed for 241 despite a feisty century from Test batsman Oshada Fernando. By stumps, Kandy had somewhat hit back by capturing four Colombo wickets for 28 runs.