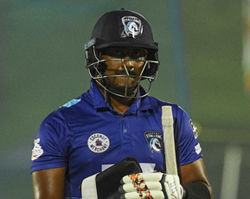 Avishka Fernando and Ramesh Mendis have got their maiden call-up to the Test side as national selectors added six more players to the squad as injury replacements for the England series.

Former skipper Angelo Mathews who pulled out of the South African series, due to a hamstring injury he sustained during the Lanka Premier League (LPL), has also been called up along with Lakshan Sandakan, Nuwan Pradeep and Roshen Silva. They are currently in training and will join a bio-secure bubble shortly to make themselves available for the Test series.