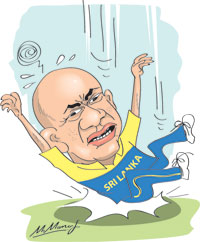 In what was probably another record, you took to politics while still a player in the national team, joining Mahinda maama’s camp. You were successful in entering Parliament from Matara. After that, there were times when ministers ordered the selectors to recall you to the national team!

You were a brilliant cricketer but that didn’t necessarily mean that you would shine in politics, though having a well-known name might have helped to get you elected. Your skipper Arjuna, the Field Marshall and actor Ranjan are others who excelled in their professions but are mediocre politicians.

I am not sure how you see yourself now, Sanath, but with the benefit of hindsight, many felt that entering politics marked the beginning of the end for you. It is true that you became a deputy minister, but since then, you have lost your most valuable asset – the love and respect people had for you.

For some time, we had been losing faith in our cricketers, particularly those who valued money above all else. You were among the first to be lured by the IPL. Why, you even sold yourself to an Indian dancing contest! The trend you began hasn’t helped our cricket, because many chose to follow you.

So, when the story emerged that you were being suspended from cricket for two years for not co-operating with investigations into match fixing that is alleged to have occurred when you were a selector, some people were not surprised at all. That is a sad reflection on you, don’t you think?