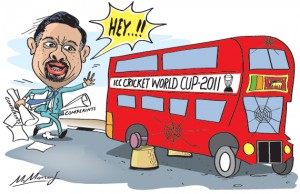 When former Sports Minister Mahindananda Aluthgamage claimed his Ministry had not approved the last-minute additions to the 2011 World Cup team to support his explosive charge of a fixed final, he was widely believed.
A document in the possession of the Sunday Times proves he may be incorrect when he said no approval was granted. Following injury concerns to all-rounder Angelo Mathews and ace spinner Muttiah Muralidaran, the Aravinda de Silva-headed Selection Committee flew in veteran seamer Chaminda Vaas and spinner Suraj Randiv as possible replacements. The addition to the squad was sanctioned by the Technical Committee of the World Cup organisers on Sri Lanka’s request. It is unclear how Aluthgamage could claim his approval was not sought for the replacement when he was the Minister in charge at the time.
0
SHARES
ShareTweet