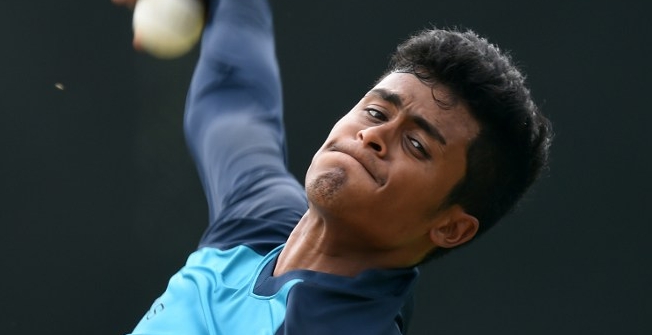 Originally selected for the World Twenty20, Jeffrey Vandersay was axed inexplicably a day before the team departed to India for the tournament, but has since returned to the side after Lasith Malinga's injury. © AFP PHOTO

Sri Lanka's chances of qualifying for the semi-finals of the World Twenty20 have been deemed dim and slim by myself as well as the gamblers' tote for a number of reasons. Let me argue my case by an unconventional route by raising a simple question: how many Sri Lankans have been selected by the franchises in the Indian IPL? The answer is: only two, Lasith Malinga and Thisara Perera. The exclusion of Pakistanis is political, but all the other principal contenders have more in the IPL line-up, though I believe England and Bangladesh may not be all that well represented.

However, there are several other grounds for my pessimistic reasoning. Let me commence by listing them, albeit not in any order of importance.

1)  Sri Lanka has insufficient players with maturity and experience.

2) Sri Lanka has too many bunnies with the bat in the likely first XI, namely, Lasith Malinga, Rangana Herath, Dushmantha Chameera and Suranga Lakmal — resulting in Nos. 9, 10 and 11 being usually dead meat (since the days of Malinga's heroics with the bat seem long gone).

3) Sri Lanka does not have an adequate line-up of solid all-rounders, with serious question marks hanging over the reliability of Milinda Siriwardana, Shehan Jayasuriya and Dasun Shanaka in the bowling department. Can any captain rely on one of them to bowl four overs?

4). Sri Lanka's pace attack is mediocre at best — even with a fit Malinga.

The last contention is a devastating one, is it not! Even after Muttiah Muralitharan retired, the spin attack in the short-form games was formidable, but now Ajantha Mendis has lost his mojo and his will. Herath seems to have had his bite and spite reduced after the finger injury in early 2015, while his movement around the field has declined with age so that he could add 8-15 runs to the batting side in the course of a match. Sachitra Senanayake too has been less effective and less economical after he was forced to modify his action. Jayasuriya's bowling has been less than impressive, even weak. Siriwardena began well in matches in Sri Lanka, but has faded in the Indian subcontinent.

It seems a pity that the selectors and/or the touring parties did not give Jeffrey Vandersay a more extended run in the middle on recent tours. This may have been induced by the playing conditions in New Zealand and Bangladesh. Imran Tahir was erratic in performance when he started, but has become a regular bowler and wicket-taker for South Africa. Likewise, Australia see Adam Zampa as an asset (one who ousted Cameron Boyce in the competition for the role of right-arm leg-spinner, while both pushed Xavier Doherty into the also rans).

It is, incidentally, about time that some stats-guru compared the returns in economy/rate and strike rate of (a) pace bowlers (b) off spinners and (c) left arm spinners and (d) right arm leg-spinners across all countries — with a breakdown that also separates out the broad location of the matches (England, Middle East, Indian subcontinent, Caribbean, Australia, New Zealand). It would not surprise me if one of the spinning divisions comes up best in economy rate or even strike rate for T20s and ODIs in several of these locations.

This essay was penned prior to Sri Lanka's World Twenty20 clash against West Indies on March 20, 2016.

Related
WT20: Misfortune has compounded Sri Lanka's problems
WT20: Too many heads and too many guillotines