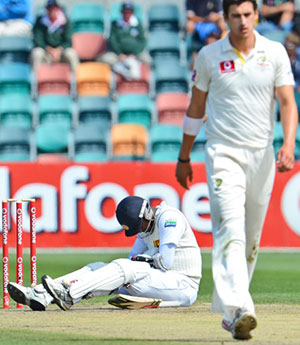 When coach Graham Ford told the media that the Sri Lankan squad had trained hard and had regular chats about their tasks, one has no reason to doubt him. But the fact remains that Sri Lanka’s batting has been abysmal at times. This feature cropped up again during their ODI victory at the Gabba, with Tillakaratne Dilshan’s misjudgement of bounce and the manner in which Angelo Matthews and Jeevan Mendis got bounced out serving as further evidence of a serious malady. Such shortcomings suggest a failure to prepare adequately for Australian pitches. In brief, just as one chooses horses for courses, one should practice for courses.

My review here does not displace the caustic comments expressed by Sidath Wettimuny and Somasundaram Skandakumar after the MCG Test debacle. They called the batting “woeful,” “shocking” and “ill-disciplined.” Both placed the blame squarely on the overriding weight that has been attached to ODI cricket, especially the T20 version, in Sri Lanka.

“Most of our batsmen were guilty of playing strokes more suited for the limited overs game,” said Wettimuny and “it is about a whole mindset change that has sadly come about through the advent of T20 cricket,” said Skandakumar.

Wettimuny was a consummate and technically correct batsman in his heyday in the 1980s, while Skandakumar was an astute cricketer when a youngster and was clinical in his role as a commentator in middle-age. Their critique is spot on. ODI cricket has diminished basic batting techniques and the kind of concentrated application required for survival in the Test arena. Let me amplify their contentions through further specifics and suggestions.

I do so as an amateur assessor. At cricket, I have never been a great technician of the sort exemplified in my day by two of my pals Anwer Jawadh or DH “Hema” de Silva. So I do not have the credentials of either Sidath or Skanda, but I am fortunate to be able to call upon the thinking of another great technician. That is Joe Hoad.

Hoad is in his 80s now and was a Barbadian cricketer in the days of the three Ws. He has been coaching in Australia for over 40 years. He is, as well, incisive in his intelligence and thus a first-class coach and mentor.

Talking cricket after Sri Lanka defeated Australia at the Gabba, Hoad told me that the Sri Lankan players had enormous talent and the team could reach the peaks if properly harnessed. He had nothing but praise for Kumar Sangakkara’s batting skills and said “that little left-hander” – Rangana Herath – was the best left-arm bowler in the present crop of leftie spinners round the traps. But he then moved to the central issue: did Sri Lanka prepare thoroughly for the Australian pitches and their greater bounce?

The clear implication was that they had not done so. Why else would Dilshan and Mahela Jayawardena get caught at slip, edging it behind while trying to leave the ball? Why else would so many batsmen get into a tangle with the short, rising ball? Matthews and Mendis in the Gabba ODI were not isolated examples. Mendis was caught out earlier in similar fashion in the ODI at the MCG as well. Prasanna Jayawardene was dismissed and injured by a short rising ball and Sangakkara too was ruled out of the series after a rising delivery broke his finger. Dhammika Prasad was out thrice trying to pull – quite criminal that.

Hoad also indicated that at the Gabba, Matthews should have been watching Mitchell Johnson’s arm and should have spotted that it was going to be a short-pitched ball from that arm-movement and the late delivery of the ball.

Hoad told me that in his day in Barbados, his club was all-white and did not have good pacemen of the Hall and Griffith kind, so they honed their techniques against short-pitched pace bowling by having someone throw-bouncing an old cricket ball or a taped tennis-ball at them from 18 yards. There were no helmets, of course, in those days.

This anecdote raises an interesting point: does the availability of helmets today mean that batsmen practice hooking and pulling — or weaving and ducking — the short-pitched ball much less (if at all) these days? Back then, you could be decapitated out in the middle, so you practised. Now, well, with helmets you are safer. Yes, safer, but more likely to be out and back in the pavilion if one does not hone one’s skills to cope with short-pitched bowling. One facet of such skill is weaving or swaying away, or one can use the pace to glide the ball over slips.

Intelligent use of the bowling machine

Good batting coaches are inadequate if they cannot operate this instrument adeptly. One can wrack up the speed and generate extra-quick, short-pitched balls. Better still, one encourages the trainee-batsman by using a new tennis ball, taped tennis ball or a red tennis ball (more expensive this latter invention) rather than a cricket ball. The idea is to simulate the pace and trajectory of the short-pitched ball. And practice and practice with the taped tennis ball being spat-out by the bowling-machine in varying manner. Weave, duck, pull, duck, weave, glide, duck, whatever.

Hoad also indicated that today’s professional cricketers must think carefully about their approaches to the three formats of the game and adjust their batting and bowling techniques, as well as their plans, for each version. Much more improvisation is required in the shorter forms of the game and there must be thought put into one’s preparation and training for each version.

Such attention to detail and preparation for the pace and bounce of Australian pitches should also have been extended to the lower-order batsmen. Sri Lanka’s lower-order revealed a vulnerability and lack of determination in both the MCG and SCG Test matches — that was alarming and, at times, comical.

Every member of a team has a duty to the team as well as to himself. More so when there is one accomplished batsman at the other end who will be the platform for a better total. They should take a leaf from the performances of Australia’s tail.

The most outstanding example of a self-transformation from tail-end bunny of the Chris Martin variety to sturdy support is the story of Jason Gillespie. At club level, the young Gillespie was always a No. 11 and so bad that his team’s wicket-keeper donned his pads as soon as Gillespie walked out to bat. Gillespie decided to reform himself.

With Hoad and other coaches, Gillespie worked hard on his defence, spending hours with a bowling machine in the nets. He continued to do so and having secured a bowling spot in the Australian XI, he walked up to Steve Waugh and offered his services as night-watchman. Request granted. The rest is history. In a Test Match against Bangladesh in Bangladesh, night-watchman Gillespie went on to score a double-century. Three cheers, then, for those bowling machines. Plus, one must emphasise that determination, application and assiduous practice was crucial. Goodness comes in threes and fours. Let Gillespie be a lesson to you, young Lankan cricket-men.

An amateur’s footnote: I cannot let Hoad hog the show. I have some thoughts of my own. At a social occasion, once, I asked Anura Tennekoon whether cricketers today practised shadow batting at home or in the pavilion when waiting to go out to bat. As far as I recall, Tennekoon did not answer me, but said that he himself did so in his time. Since he was a technically correct batsman of the highest quality, this speaks volumes. But from my experience at a lower-level, the point is that such imaginary batting practice got one’s feet moving. Skip-skip forward drive, skip-skip on-drive, forward defence, back-step defence, etc. Alternating moves, rapid-fire, repetitive. The idea is to instil a routine, as well as develop footwork by getting your feet moving.

What else develops good footwork? Ballroom-dancing, young man! It is no accident that some of the world’s most magical batsmen were superb ballroom dancers in their day: Sathasivam, Compton, Miller, Sobers. Admittedly, they did not pursue this practice because of any cricketing intentions. They enjoyed it for one. For another, it was a preliminary move in their bedding of women.

There is a moral here for our budding Sri Lankan cricketers. Not one about seducing women, but a pointer towards improvements in their batting skills. Take to the dance floor as part of cricketing, but not the shake, rattle and gyrating type of dancing that is popular nowadays. Nay, it is the cha-cha-cha, quickstep, fox trot and jive that one must pursue. They, too, are fun. And there is samba too if one wishes for something attuned to the baila-beat.

Dancing is good, very good, for one’s batting skills. Dancing, yes. And, if, later, that nimble footwork captivates some lass on some nights, well, no harm done. Usually.