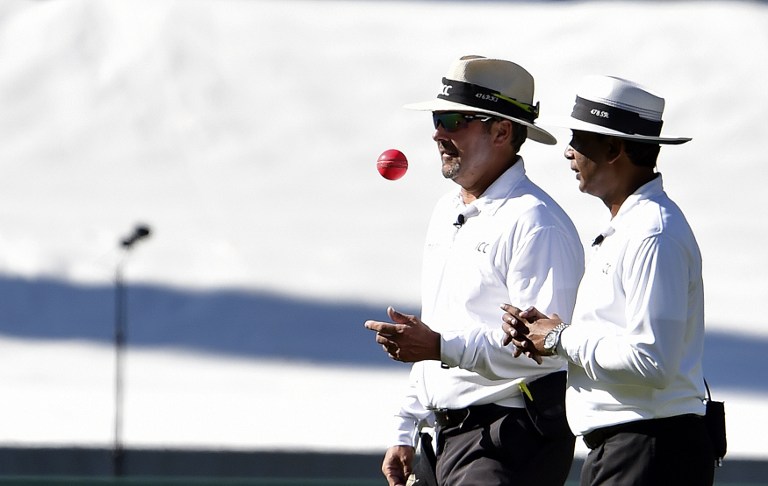 Umpiring decisions have come under more scrutiny with on-field conversations between umpires being made available to the public now. © AFP PHOTO

Cricket umpiring is a difficult task and subject to human error. The cluster of technological systems and directives that make up the DRS today overcame the deep conservatism of cricket administrators (Indian obduracy and idiocy excepted) so as to improve the system and reduce errors. That objective has been secured, while the presence of the system has improved the capacity of umpires because they study its workings and can, now, make better judgements.

But at the Adelaide Oval on day two of the third Test between Australia and New Zealand human fallibility reared its head and a gross error of judgement was perpetrated. The focus has been directed at Nigel Llong the third umpire whom, as it happens, is regarded by the Kiwis as a serial error-monger at their expense in this series. Yes, he must be under the cosh for the same reasons as Daryl Harper was not so long ago for errors of judgement behind the box, as well as those on-field.

However, on this occasion the failure was also — let me stress that, also — collective. All three umpires failed to show common-sense.

Nathan Lyon knew he was out and behaved as he was out by walking towards the pavilion in the manner dead-and-buried. The two bloody-fool umpires on the ground, both head umpire Sundaram Ravi and square-leg umpire Richard Illingworth, should have immediately put their heads together and contacted Llong and revoked Ravi's original mistake (perhaps excusable, though I spotted a nick on TV) in the course of a collective chat (perhaps off-air). It is not folly but courage for an umpire —in this instance Ravi — to change his mind.

The whole point is to reach correct decisions.

What the world wants is as many correct decisions as possible, not the 100% accuracy that the God-Almighty Indians demand, and not the overwhelming hesitancy within ICC circles in placing the umpiring process under public scrutiny.

It took several years before the ruling class in the ICC agreed to the conversations between field umpires and the TV Umpire to be part of the public realm. That practice has now revealed Llong's error — including his neglect of protocol. This revelation will benefit cricket in the future because it will be a sharp lesson to all umpires.

But, here, I add another little measure: field umpires must use their common-sense and be ready to reverse mistakes by dwelling on the batsman's reactions and showing a readiness to initiate potential reversals themselves. "Look, Nigel, I may have made a mistake. Can we collectively review that call," from Ravi would have gone a long way to improve practice besides making for a fairer result in a close game.

After all, Ian Smith is still fuming (Smith walked out of the commentary box with smoke coming out of his ears). Well he should.