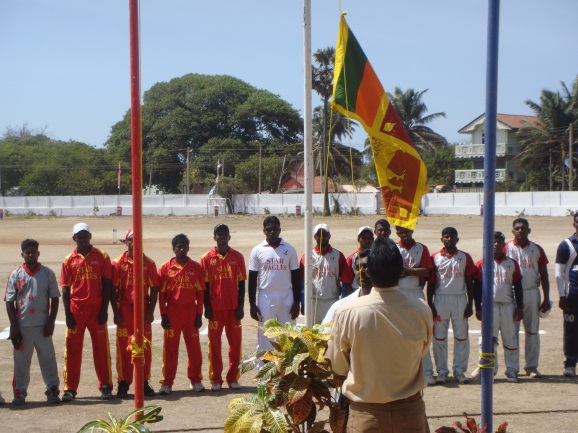 Over the past 18 months or so I have been brought into contact with the individual initiative of Jeremy Liyanage of Melbourne in sponsoring a community development programme in Mannar town and Mannar island.

I visited Mannar in November last year in order to get some sense of this work, while also indulging in sightseeing, as this was my first-ever visit to that locality.

During my visit I met young Mayoorian, part of a family who hosted several of Jeremy’s visiting group of observers and helpers (including professor Siri Hettige and Nirmala de Mel).

Mayoorian is a cricket fanatic and showed me some of his cricket team’s photographs. He is a member of the Star Eagles and now features in a sponsorship video in hip-style which has been developed by the Mannar cricketing enthusiasts to promote the Mannar Premier League.

No better introduction can be provided for this effort than a short memo which Jeremy sent S. Skandakumar and me recently, as we sought help from cricketing friends for this local effort.

Thanks so much for your speedy email. Nice to know there is support from half way around the globe. Not sure what has happened to me these last couple of years but I am now quite ‘sold out’ to Mannar District and see it as my second home. I spend almost six months of the year there (in 2 x 3 month stints) and come back to Australia to earn enough to take me back. I am going through what seems like birthing pains as I join with my extended Mannar district family who are emerging from a dark period. Our volunteer group Diaspora Lanka works in different ways to help rebuild this once proud place and Mannarin marumalarchi.

We are really trying to support this spirited and well organised group of youngsters with their Mannar Premier League (MPL). I was there for the official launch and first game on 8 July. What they really want support for is to get Murali or another profile cricketer to be present at the closing ceremony on 9 September. My efforts thus far have yet not produced the desired outcomes so I sincerely ask for your help.

This local Mannar team, the Star Eagles are guys in their early to mid-twenties who are valiantly trying to ‘grow cricket’ in Mannar and in the North. Last year they held a very successful MPL 2011 season and engaged eight other teams in a hardball tournament. They approached an array of sponsors and were highly organised and professional in their efforts. This year the Kilinochchi District team have also agreed to take part. Although Mullaitivu was invited, they felt they weren’t ready for this year’s MPL. Very recently the Jaffna cricket team asked to play the Star Eagles and this match was held today. This is the first time an adult cricket team from Jaffna has visited Mannar and guess what? Our guys, the Star Eagles won!! It was a thrilling match in which the Star Eagles scored an upset win. The Jaffna team then invited them to play on their home ground, and again the Star Eagles won.

The Mannar District Cricket Association applied for registration to the SLCB quite some time ago (years) but not had a response to date. Recently the Star Eagles wrote to the SLCB requesting a cricket official’s presence at the opening ceremony but again didn’t get very far. They have already raised 80% of their sponsorship goal amount of Rs 424,000. So these guys are serious.

Any support or influence to bear on this issue would be greatly appreciated. These guys really need our support at this time. Attached is their proposal with budget and letter to SLCB. This is their video clip advertisement: http://www.youtube.com/watch?v=fLFHIlPnCyQ . Let me know if you can help, and keep up the great work.