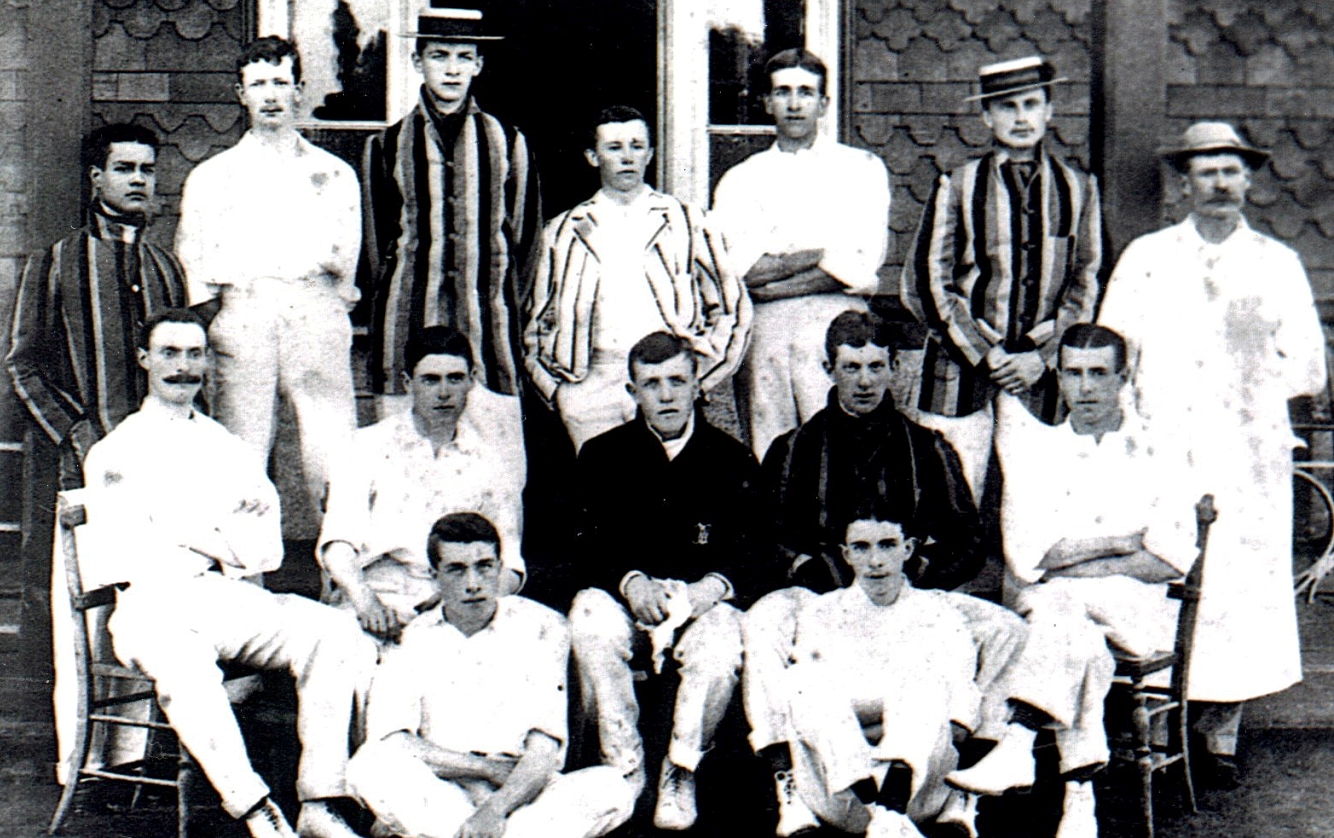 Thomas Webb Roberts was born on 27th April 1880 at Black Rock in the suburb of St. Michaels in Bridgetown, Barbados. He was an only son of Thomas Clarke Roberts by Isabel Marshall, following their marriage in 1869. Of slave lineage, TC Roberts (1840-1927) had a furniture shop and must have belonged to the numerically small Black middle class of his time. This conjecture arises from two facts: (a) he was at one stage a church warden at The Cathedral in Bridgetown and (b) he was able to send his son TW to the prestigious elite school of Harrison College where the fees were steep.

Since TW was coffee coloured in complexion and not as dark as his father it is likely that the family would have been embraced by the local category of "high browns" in distinction from the "blacks" and "dark blacks" which differentiated the Negroid Bajan populace who were non-White — terminology deployed within the non-White world as well as the dominant Whites.[1]

Moment I: Harrison College not only housed many of the boys from the White gentry who dominated the plantation and financial circles of Barbados; it had a good cricketing genealogy that served up many of the Barbadian (Bajan) cricketers. An old college photograph for the season 1994/85 shows him lounging next to the captain, one C. Yearwood, the only Black among twelve White Bajans. Young TW Roberts honed his cricketing skills within this environment — so much so that he played for Barbados in 1896/97 and enters the archives as having played four matches for Barbados in the period 1896-to-98, involving 6 innings for a total of 72 runs with a highest score of 24.  Hardly earth-shattering of course; but recall that he would have been a teenager, a young stripling. One of the few tales from his Bajan days[2] that I recall is the fact that the Englishmen laughed when he walked in to open the innings because he was so young. He promptly went after their bowling and collected a few boundaries, but his rashness led to an immediate dismissal.

Checking the archives I find that he represented Barbados against Lord Hawke's XI in two matches played at Kensington Oval on the 25-27th February and 2-4th March 1897. He opened the innings for Barbados on three of these occasions and his scores were 02, 24 run out, 24 and 02 sequentially. On two of these outings he was dismissed by Christopher Heseltine of Hampshire and England, who had already represented his country against South Africa. Lord Hawke's side included several Oxbridge players from elite schools, but perhaps its most renowned player was Pelham 'Plum' Warner (1873-1963 — later knighted).[3]

However, where Harrison served TW best was in the education imparted. He secured the Barbados Scholarship to Oxford, where he attended Hertford College and went on to pursue a course in classics (known as "Greats"), a task he completed with "some distinction" (his own words: 1963).

TW Roberts was one of the most aggressive batters Ceylon had between 1905 and 1914. [Supplied]

Moment II: Thus far, I have hardly any other information about his Oxford days. Through happenchance we know that he played for Hertford College because one of the biographies of CEW Bean, the famous Australian reporter at Gallipolli who went on to become a historian of renown associated with war memorials in Australia, places TW within a photograph of a Hertford XI (see McCarthy 1983). TW Roberts's typically succinct memoir (written in 1963) refers to "having some distinction at cricket;" while Sri Lankan cricketing lore asserts that he played in the Oxford trials of 1900, but was not selected and therefore did not gain his Blue (Perera 1999: 99).

I remain surprised that he was not considered good enough for the Oxford team. Racial prejudice may have been a barrier[4], though it is also possible that his studies took precedence over due preparation.

His memoirs note that on graduating he "failed in [his] efforts to find employment as a schoolmaster in the U. K., probably because of a colour bar in the teaching ranks of public schools;" while adding: "I nurse no grudge because I found room in the colonial service." He told me that he chose to seek a place in the Colonial Service via its examination process rather than that testing candidates for the more prestigious Indian Civil Service. Once selected, he opted for Ceylon rather than Hong Kong. He reached the island in November 1902.

Moment III: The Ceylon Civil Service (CCS) in British times was, of course, hierarchical like any bureaucracy. But within this hierarchy the few Ceylonese locals, such as Paul E. Pieris and Ponnambalam Arunachalam, who had surmounted the educational and prejudice barriers to gain entry to the CCS, were generally shunted into the judicial branches or specialist departments rather than the posts of Government Agents or Assistant Government Agents who oversaw districts as "lords of all they surveyed."[5] TW records that he "met with a fair deal" and was received "kindly [by] almost all my British fellow officers." But he also notes that there was "one qualification" to British fairness: "civil servants of brown complexion were not appointed to substantive administrative posts [because] Government cherished a belief that pure Britishers had more talent in this sphere."

This meant that he was not placed in Colombo, but was located initially at Matara and also spent some of his early years in such spots as Batticaloa and Ratnapura. Such outposts were not conducive arenas for the display or development of his cricketing prowess. However, there were years when he was stationed along the south western coast and it is here in 1908 that he etched at least two indelible marks in the annals of Ceylon cricket.

The second of these occasions was in March 1908 against a team of MCC Amateurs led by A. O. Jones when the MCC team stopped over in Colombo on the way back from Australia, with of the match being played at that famous venue on Galle Face Green (see Roberts: Essaying Cricket, 2006: Fig 1).  George Vanderspar, a doyen of Ceylon cricket in the 1900s, had organised the contest, but could not persuade the professional cricketers in the MCC team to participate because the latter demanded a prohibitive fee of ten pounds sterling per person. So the team was listed as A. O. Jones Team and comprised the Amateurs in that touring squad and some shoe-ins from the British garrison and the Colombo Sports Club (Perera 1999: 99).  They were faced by a Ceylon team of XII … yes twelve. This XII was made up of local Europeans (6) and Burghers (4), with one Tamil and one TW Roberts, the Bajan West Indian. The brief report in SP Foenander's Sixty Years of Ceylon Cricket (Colombo, 1924: 84) reads as follows:

Gathering one half of a relatively small total, as anyone will tell you, suggests a batting achievement of considerable skill.

Elsewhere in the cricketing history Foenander (1924: 189) sums up the local reading of TW's sporadic ventures on the local cricket field:

"TW Roberts who holds the Ceylon record [in 1924] for the highest individual innings, namely 247, was a well-known cricketer in the Barbados and at Oxford University, before he came out to Ceylon to join the Civil Service. Roberts had played for Barbados in the nineties against PF Warner's team. He took part in the Seniors Match at Oxford and just missed his Blue. Playing for the Colombo Sports Club for many years he was one of the most aggressive batsman that Ceylon had between 1905 and 1914. His magnificent innings of 70 for Mr. Vanderspar's XI vs the MCC Amateurs who included J. N. Crawford and K. L. Hutchings, will long be remembered in the annals of Ceylon cricket. His most memorable feat in local cricket was the great innings of 247 that he played for the Kalutara Bar in 1908."

So, this account marks the first of these moments in Sri Lankan annals: when he pulverised the Galle Lawyers at the Kalutara esplanade, gathering "his first 183 runs before lunch in two hours and his next 58 runs in 77 minutes after lunch!" (Perera 2000: 98).

We are fortunate to have an image of TW after this feat, quite typically holding a pipe in his hand, with a cadjan shed in the background that may well have served as a clubhouse. That is surely local colour that caps and consummates Bajan flair.

I thank Nirgunan Tiruchelvam for his comments, leads and encouragement and Joe Hoad for many vignettes on Bajan life ways — Michael R

McCarthy, Dudley 1983 From Gallipoli to the Somme. The Story of CEW Bean, Sydney: John Ferguson.

Woolf, Leonard 1963 Diaries in Ceylon, 1908–1911, and Stories from the East: records of a colonial administrator. London: Hogarth Press.

1Critical information on the colour coding and life world of Barbados was gathered from Joe Hoad (aged in his 80s and younger by the day), a White Bajan living now in Adelaide, a man who does not have one iota of race prejudice and has related many stories of the underside of racial interaction in his home land.

2It is my eternal regret that I did not seek reminiscences from my pater regarding his life in Barbados and his Oxonian days. Even my recorded interviews with him as one figure embraced in the Roberts Oral History Project (1965-69) related solely to his life work in Ceylon as it was then known.

3Plum Warner had himself attended Harrison College. See this and this.

4Nirgunan Tiruchelvam demurs:  "I doubt that the colour bar was a factor at Oxbridge at that time. Ranji played for Cambridge in 1890s. James Pieris became the first coloured President of the Oxford or Cambridge Union in 1882" (email. 3 Aril 2015).