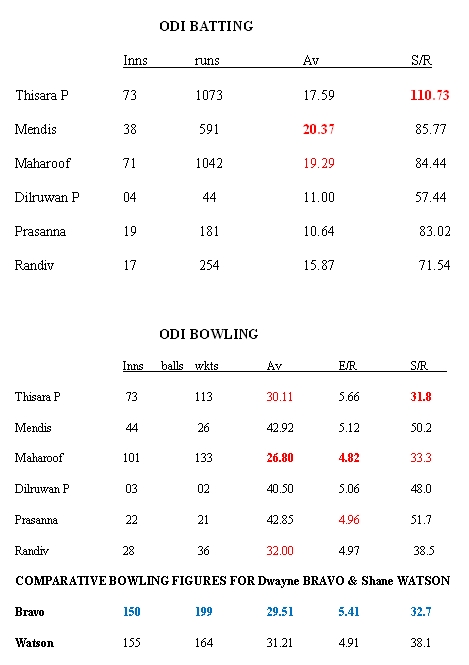 Are the best all-rounders currently in the team? © AFP PHOTO

I am venturing bold and surveying Sri Lanka's stock of potential all-rounders in support of Angelo Mathews and Tillakaratne Dilshan. I also have one eye on the future.

The category 'all-rounder' is classified here in an expansive and tendentious manner to include bits-and-pieces players and those who can be injected into the upper order as pinch-hitters (for e.g. Seekkuge Prasanna now and Dilhara Lokuhettige in the past). In the present XV Thisara Perera would be classed as an all-rounder, while Jeevan Mendis would be a batting all-rounder; while Nuwan Kulasekera may, with some reservations, be termed a bowling all-rounder.

In brief, the brief I have constructed encompasses "near-all-rounders" as well as those in the Mathews-Sanath Jayasuriya-Shane Watson category.

This review is necessarily circumscribed by the fact that (A) I have not watched all of Sri Lanka's recent ODI matches; (B) not followed the local cricket scene closely and (C) broken down the statistics of individual players into phases that separate the last 18-24 months from previous years.

Of the players brought within this ambit, Dilruwan Perera and Farveez Maharoof have had Australian experience. The inclusion of both may surprise some, but he has been in the Test team in 2013 and fared reasonably well. Muditha Madhuwansa (ex-Tamil Union and a playing coach in Adelaide) argued that Maharoof should have been in the side. It may surprise readers to find out that his batting average is second only to Jeevan Mendis and that his bowling E/R and S/R are quite reasonable.

Let me set out the comparative statistics, with leading figures in each column marked in deep red or simple red. On the bowling front, the statistics for Dwayne Bravo and Shane Watson serve as a good comparative backdrop.

You will now perceive that a straight comparison of Maharoof and Thisara Perera indicates that Thisara's batting S/R of 110.73 is way ahead of all, while Thisara's bowling S/R of 31.8 also edges out the best of the rest. I suspect that figures for Maharoof over the period 2008-14 will sharpen the differences between the two.

Statistics are not the be all and end all. For one, it is match-winning capacity with an outstanding intervention on occasions that counts.

This has been Thisara's forte with both bat and ball. He has produced an ODI hat-trick on at least one occasion and a hurricane innings of significance on several occasions. He is also a good fielder and has taken some good catches on a number of occasions, whereas Maharoof is not all that agile and is more likely to leak runs as a boundary rider. Thisara is also younger. So, the thinking of the selectors cannot be faulted.

That said, Thisara's profligacy in economy rate when bowling should remain a concern. I would like to see account of the number of times when he has conceded over 9.5 runs per over. All bowlers are taken to the cleaners every now and then in ODI bowling; but it has happened too often with Thisara. Again, his batting average of 17.59 is far, far too lean. We require less meat and more circumspect accumulation to bolster his strike rate and his claim to a permanent spot in the XI.

Other interesting comparisons emerge from the comparative figures in the spinning department.

Suraj Randiv compares well with the two spinners Jeevan Mendis and Seekkuge Prasanna. His E/R and S/R of 4.97 and 38.5 are in fact better if taken together. However, Jeevan's batting average and S/R are superior in some measure — hardly surprising because he is a batsman who bowls.

Prasanna, Jeevan and Suraj are cricket-quick across the ground and leave Maharoof and Ajantha Mendis way behind. Once opposing sides had worked out Ajantha Mendis's bowling repertoire and he became less threatening, the selectors had no option but to ditch him. One could not have a decent fielding XI with both Herath and Ajantha in the field; and one had to opt for the more intelligent wicket-taking bowler and one who was also more alert in the field … and able to surprise everyone with a remarkable catch on occasions.