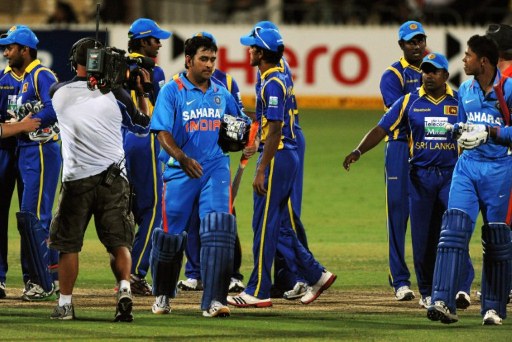 Many cricket fans would continue to marvel at the coolness and authority displayed by Mahendra Singh Dhoni in crunch situations at the end of tense ODI matches. But let me highlight and praise Dhoni’s balanced commentary in reviewing India’s performances and unfortunate moments after a match is over. His equanimity and reasonableness is praiseworthy.

Several years back I was able to sneak into a media review at the end of a match where India had beaten Sri Lanka at Adelaide Oval, an occasion where Dhoni fronted up for the Indian squad he captained. I was impressed by his clinical commentary and clarity of expression. More recently, he faced the press in adverse circumstances after the Australian Test series where India was trounced and his own batting was rather disappointing. He avoided clichés and accepted India’s shortcomings four square.

Likewise, after the pulsating and historic tie between Indian and Sri Lanka at Adelaide Oval on February 14 he referred to his own fatal error when India was on top, that is the moment where he sparked Gautam Gambhir’s run-out [though replays viewed subsequently told me that Gambhir had also contributed to it in not diving for the crease, while we must also mark Kulasekara’s fielding as top-drawer].

Again, when informed that the three umpires had combined to allow Sri Lanka to get away with a five-ball Malinga-over, Dhoni did not rise to the bait and indulge in the song and dance which the pressmen were probably waiting for. He immediately doused the potential fires arising from this failure – an act that may have cost India a win, yet another “if only.” So, I say bravo MS for your good sense.

With the humdinger clash ending in a deadlock, it later emerged that the match umpires — Nigel Llong and Steven Fry — had allowed the 30th over of India’s innings to last just five balls, meaning Sri Lanka had faced 300 legitimate deliveries to the opposition’s 299.

"Coach Duncan Fletcher told me there was a five-ball over," said Dhoni. "We have seen this in the past. We’ve bowled an over and almost changed sides but the third umpire interferes and says you have to bowl one more ball in this over. Usually that’s what has happened in the past.

"It didn’t happen in this game — I don’t know why. Not much can be done now. A dot ball could have happened. It’s done and dusted. We could create a big fuss out of it, but what’s the point? It’s like a controversy that’s really standing right on the edge, just about to happen. We don’t really want to create a controversy out of it. We just want to stick to the result that has happened. Hopefully it won’t be replicated, not with us or any other side."

Dhoni, part and parcel of India’s ongoing stance against the full use of the Decision Review System in ODI and Test cricket, remained adamant that human error is an understandable facet of cricket.

"If this can happen, I don’t know why people can back the DRS so much," he added. "We have seen people being really happy with DRS in one series when it goes in their favour and then it doesn’t go in their favour, they’re quite unhappy about it. "I’m quite happy with the two umpires in the middle, the third and fourth umpires, the match referee and the scorer. If that ball-counting error still happened, it’s better off accepting it, because as humans we are bound to make mistakes.