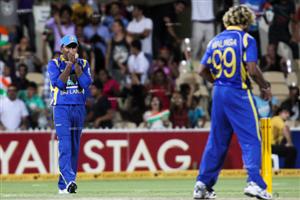 If only Dan Christian had not made an athletic, boundary saving dive on the ropes once, and then again a second time, late in Sri Lanka’s innings at Perth on the 10th of February, Angelo Mathews would have three or four runs less to make in that nerve-tingling last over and Sri Lanka would have probably won.

But, remarkably, we have had a series of three such coruscating and nerve-tingling finishes in a row, because the Perth ODI was followed by two other games at Adelaide which went down to the wire and held spectators enthralled.

In match two Australia ended up as losers as that cannonball-magician MS Dhoni kept cool and hoisted India to an improbable win in the last over — aided by at least one “If Only.” And then, as remarkably, Dhoni kept his cool and secured a remarkable tie in the last over against Sri Lanka in a battle where the gallant Sri Lankans must have felt they ‘lost’ a game that was in their grasp – not winning because of … you guessed it …several If Onlys!

Let me underline that simple point: a few better fielding efforts of the type that Christian pulled off, or better cricket in a conventional cricketing sense, may have made a difference and enabled the team that lost a game within their grasp to sigh and say “IF ONLY.”

I will take them in temporal order,

These were run-saving little moments of critical import in the context of each match. It is a tale of small steps carrying momentous import.

However, the list of lapses that counted for much does not end there. As any cricket buff will tell you, there were other moments during these matches that were turning points and some of them were quite patent even at the moment of their occurrence, though underlined more clearly at the end of the day.

Thus, when Dilshan’s error led to Sangakkara being run-out at the WACA against the Aussies, we knew then that what was going to be a controlled chase was now in peril. So it proved. Again, when umpire Nigel Llong erred in giving Gautam Gambhir out lbw when he was well set, one felt then India’s easing to victory in a canter was imperilled (and if India had permitted the DRS, that error would have been rectified).

Likewise, Gambhir and Dhoni were well in command of the situation against Sri Lanka two days later when Dhoni left Gambhir high and dry and run out.

Earlier, Sri Lanka’s total was less than it might have been because Mathews and Chandimal proceeded to take several hair-raising runs three times in a row and, lo and behold, Chandimal was run-out in their third attempt at hara-kiri. Like Gambhir, Chandimal was well-set and his continued presence would have yielded a bigger total for India to chase. His dismissal meant – in all probability — that India had more than 236 runs to chase.

This, of course, is a familiar tale in some cricket matches and is part of the beauty of the game. Lapses, small as well as big, are integral to its topsy-turvy character.

And how could the error-prone or fielding-brilliant character of cricket as a game be better demonstrated than by the marking of a peculiar feature of the Sri Lanka-India match on 14th February, where a bloke called Mr RUN-OUT snared seven wickets out of the nineteen that fell.