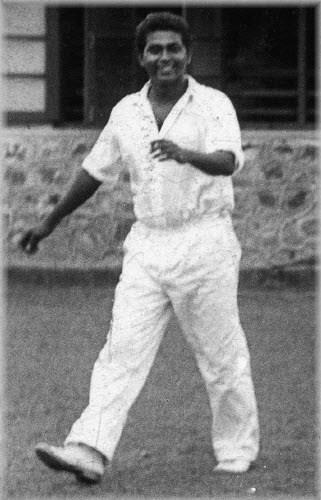 Hema de Silva was my skipper, a compatriot in cricketing arms and a pal — a true mate in the best Australian sense of the term. He is known in the Lankan cricketing world as "DH." But, to me and others at Ramanathan Hall in Peradeniya University, he was "Hema." He remains Hema.

Our association did not quite begin that way. As a fresher in the Aloysian cricket team at Galle I faced him as opponent, the captain of Mahinda. I dropped him at third slip off Vernon Regis; but, if my memory serves me right, ran him out with a direct hit from fine leg after Percy Amendra had glanced the ball from a spin-bowler and I ran from first slip and threw the ball as I turned — with the angle and distance of my run indicating the direction and length required. Later he returned the ‘favour’, getting me out caught and bowled after I made 65 runs.

A year or so later in 1957, when the University authorities assigned me to Ramanathan Hall, there was Hema as skipper of both the Rāmanathan and Peradeniya teams. As Daya Sahabandu, the left-arm spinner for Nomads and All-Ceylon, recently told the Sri Lankan world on television, "DH" was the best captain he ever played under. At Peradeniya, however, we were mates and colleagues in arms — not only in the Peradeniya team, but also in the blood matches between halls as Ramanathan Hall fronted up against Arunachalam, Marrs, et cetera.

University cricket in the 1950s and 1960s was of a high standard. We were just one University then, the University of Ceylon. The full University team playing in the Sara Trophy, the top league in Ceylon, was dominated by medicoes and the Colombo lot. Peradeniya players had little chance of breaking into the XI during the 1950s, unless they had achieved repute as good schoolboy cricketers at one of the Colombo schools or Trinity or St. Anthony’s. Hema had the guts and determination to break that privileged circle by camping out in Colombo during the holidays and muscling his way into the side. When HIK Fernando, who played as wicket-keeper batsman for Ceylon, became captain the mateship between Hema and HIK enabled Hema to encourage the Colombo circle to open up opportunities for Peradeniya players.

Those who know and love their cricket will affirm that Hema was a cricketing technician who studied the art of batting, guided by Clem Hill’s book and his own studious observations. This astuteness he extended to his captaincy, deciphering weaknesses and asking his bowlers to work to a specific plan of attack for each opponent. This is what modern cricketing sides pursue now — aided by whizzie modern technology. On the odd occasion Hema worked this analytical art as a bowler himself: I recall one magic moment when Peradeniya were skittled out for a low score by a top SSC side at our home grounds one atmosphere-laden day; but then responded strongly to effect a great win — led by Hema who ran through that side with his medium pace dibbly-dobblies. Memories flood do they not when us cricketers traverse the past!

Hema was yet more: a cricketing enthusiast of unlimited intensity and commitment, whose relationships were also spiced with a touch of humour. This enthusiasm waned when confronted with university-exams, but he lasted the course in Sociology Honours and eventually secured employment at the Colombo Municipality, where he promptly built up the Nomads Cricket Club team as a formidable body in Sara trophy cricket by hiring several cricketers into municipal service.

He was later transferred to Kandy as Municipal Commissioner. Here, he applied his analytical mind to the study of both table tennis and tennis, while yet maintaining an interest in cricket. He became a tennis coach and one Miss Saranga Sangakkara (b. 1976) was a beneficiary — even moving on to represent Sri Lanka at tennis in the 1990s.

This forensic skill and enthusiasm made for a deep friendship with another mind of the same order, that of Kshema Sangakkara, a lawyer of some consequence in the Kandy bar and a student of cricket himself. It follows that young Kumar Sangakkara, Saranga’s younger brother, also received the benefit of Hema’s advice in cricket and tennis. The relationship between the two families, Hema and Sujātha de Silva and Kshema and Kumari Sangakkara, flowered to the point that the Sangakkaras stayed with the Jayaweera (Sujatha’s lineage) and de Silva kinfolk when they toured England to watch their son playing for Sri Lanka in 2002. The depth of connection was deep enough for Kumar to refer sadly to DH’s death when he was interviewed recently (2014) at Durham in England and to mark the latter’s influence on his career.

Kumar’s cricket career, as we know, developed late. It is girded by a work ethic that comes from the ‘books’ etched by both Hema and Kshema. To that extent he is a testimony to the spirit of DH de Silva, "Hema" to me.

If Hema was an inspiration and servant of Kandy town as well as its sports circles in the 1980s, that town turned on him. Or, rather, someone in that town or locality did. During the height of the Janata Vimukhi Peramuna insurgency of the late 1980s an assassin shot him as he coached a host of young ones at tennis; he was badly injured, but survived only because his youngest son Nalaka shouted "thaaththi, duck" as the assassin and aide approached him from behind. Hema ran, but was being overtaken when he turned and grabbed the gun as the killer pumped bullets; he was hit severely but the gun jammed or ran out of bullets when Hema was at the mercy of his killers. One bullet remained in his body and his family was stunned to see it displayed by an X-ray following a recent heart operation. Though this brutal act in 1989 was widely attributed to the JVP, grapevine gossip and familial suspicions suggest that Kandy Municipality jealousies may have been the motivation for this attempt at murder.

This blow, a traumatic moment surely, sundered the patriotism of Hema and family. Nalaka tells me that that scene of attempted kill remains "engraved in his mind." They left for Melbourne in Australia, where Hema took to tennis coaching with his infectious enthusiasm, typical earnestness and sharp acumen. Sri Lanka’s loss was Australia’s gain.

It was at Peradeniya campus that our friendship and close association blossomed, so it is apposite for me to close my memorial with an ode to its spirit in the 1950s. The student population within that live-in campus those days was diverse in ethnic, class and regional backgrounds. Friendships cut across these lines of social differentiation. Enmities, if any, were political (as in "Coms" versus "Trots" for instance) or personal. The lingua franca at the campus those days was English because our education had been in that medium, though it is likely that some personnel conversed in Sinhala or Tamil with ethnic fellows on specific occasions. It has been a surprise, therefore, for me to discover this last week that Hema and his siblings had emerged from an extremely poor working class background in my home town. This was never evident to any of us at Ramanathan Hall. Hema, moreover, was both handsome and bright enough to captivate a fellow student from Methodist College Colombo, none other than Sujatha Jayaweera.

Now, his biography, laid out so passionately and movingly by his eldest son, indicates that his advancement in life was a tale of rags to riches, metaphorically an ascent from mat on hut-floor to bed in suburban house. His is a proud and uplifting tale let me stress.

It is also a revealing tale. By itself, and in our combined testimony to the social life coursing through Peradeniya campus in the 1950s and 1960s, the world has striking evidence of the benefits of free education and the various strands of democratization occurring within Sri Lankan society from the 1940s onwards. Hema’s progress in life and his success in the professional field highlight that process.

That democratization process, as I have stressed elsewhere, also occurred in the fields of cricket: the domination exercised by Royal College and the Christian denominational schools located in Colombo and Kandy during the 1920s-50s were whittled down as Ananda/Nalanda in Colombo and a tiny cluster of outstation towns began to penetrate the highest rungs of cricket from the 1960s . Lads from Moratuwa and Galle led the way for those located in outstation centres (Roberts, 2007 and 2009). Those from Galle in the 1960s and 1970s were all from Mahinda — and from one family, the Dandeniya de Silvas (DH, DP and DS).

In this manner they were trailblazers for a number of others in subsequent deacdes: Ajit de Silva (Ambalangoda), Athula Samarasekera, Upul Chandana and Champaka Ramanayaake (Galle) and Sanath Jayasuriya (Matara), and an ever-growing list that now reaches out to personnel from Kurunagala, Chilaw, Ratgama, Kegalle, Matala and Hambantota.

The fruits of this democratization process are much larger now for cricketers in comparison with the benefits derived yesteryear in Hema’s time. Jayasuriya’s advancement has also been from the mat in poor hut; but the economic returns place him, metaphorically, in a four poster brass bed in a palatial suite. That is a reflection on the transformations within the cricketing world as much as the socio-political changes within Sri Lanka since the 1990s.

To me, however, Hema remains a friend grounded in dedication and effort, a good Sri Lankan pal, a true machan. For him I sigh, I cry, I smile in sadness mixed with pleasure from indelible memories of moments shared.