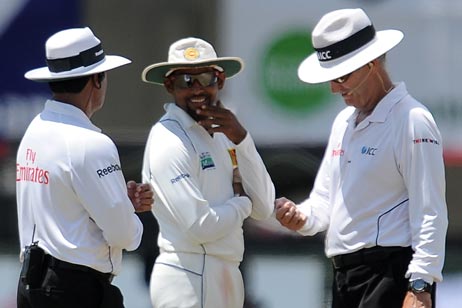 An addendum to my previous column DRS – India’s hegemonic idiocy

An old friend sent me an email indicating that I should “outline proof” before essaying such strictures as “the height of irrationality.”

Let me note in response, that apart from (a) a reference to the ICC estimate on World Cup DRS effecting a seven per cent improvement (B) one anecdotal observation on my part referring a peculiar dismissal (that of Sachin Tendulkar at the SSC), I assumed that (c) cricket fans who read my article would be less than imbecile and would be guided by their observations of referrals during both Test matches and ODI matches where the DRS was in operation.

Thus, on several occasions I have observed on-field decisions being reversed by the on-field umpire after the third umpire has used the available technology to evaluate the evidence.

These reversals, note, have gone two ways: (X) when someone declared “not out” is deemed out; and (Y) when a batsman declared “out” is reprieved. In brief, in the course of a series, several “human errors” by on-field umpires have been rectified via DRS, the third umpire and some dialogue between the head umpire and third umpire.

In other words, on every such occasion a mistake that may well have swung the game one way has been averted. This is a momentous gain.

I have not kept count of such reversals. If any readers can provide statistics it would be appreciated. In any event, I invite reader recollections and commentary on this point. Anecdotes with empirical precision can aid our evaluations.

Let me add that, from snatches of information, my impression is that most of the younger generation umpires actually welcome the use of the DRS because they are as interested in getting it right; and because such reversals are outnumbered by the proportion of instances where the on-field decisions are confirmed (am I correct here?).

That is, where several old school umpires such as Dickie Bird and Darrell Hair object to the DRS, those still active are partial to it. One reason for this leaning is the fact that DRS has also revealed how well they are performing a difficult job.

The paragraph above is attentive statement based on grapevine threads. I would appreciate any information that rectifies or clarifies this issue.

Third umpire: On the odd occasion, “human error” is that committed by the third umpire. If my recollections are correct, Asad Rauf was in serious error in overturning an on-field decision and declaring Shivnarine Chanderpaul out in a Test match at Adelaide during the last Windies tour. Again, I believe one of Daryl Harper’s decisions in the West Indies created a great stir and alienated the England squad against the DRS. Again, my dim memory indicates that Harper was responsible for a third umpire bloomer on another occasion.

Such errors by third umpires are inexcusable because they have more time to reach a decision. This type of mistake is not the fault of the DRS scheme but is a product of ”human error.”

We are aware of such howlers because the TV commentators also have the evidence before them and provide their views. Third umpires who make such errors should be demoted (though I would not impose such a harsh act on Bruce Oxenford for pressing the wrong button in Michael Hussey’s case recently at the Gabba).