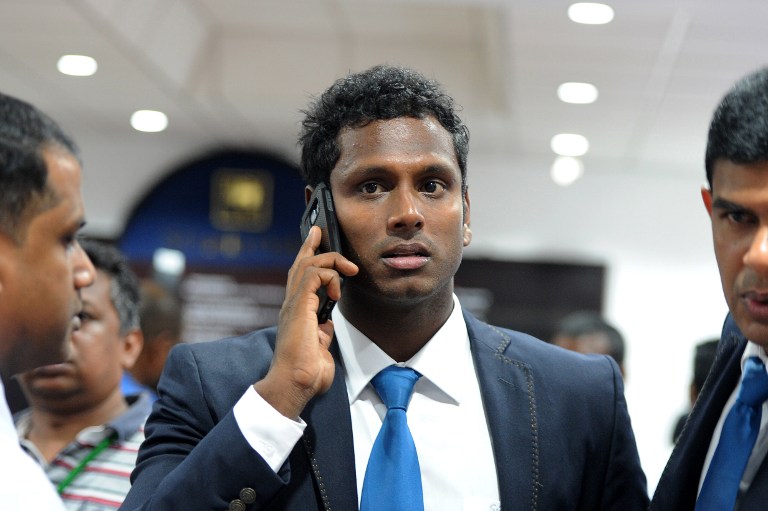 Captaincy of the T20 side was thrust upon Angelo Mathews at the last-minute after Lasith Malinga pulled out of the tournament with an injury. © AFP PHOTO

ONE: Sri Lanka's terrible performances at the ICC World Twenty20 were the result of poor selections, poor batting, poor running between the wickets, mediocre bowling, some poor fielding and one atrocious umpiring decision.

The awful umpiring mistake by Johan Cloete that sent Tillakaratne Dilshan back to the pavilion at 3.1 overs — a decision that was marked explicitly by several TV commentators including Alan Wilkins — was all the more severe because of its timing: viz., when Dilshan was on song and Sri Lanka had got off to a good start against the West Indies with 20 runs in 18 balls.

Likewise, the run-outs arising from poor calls occurred at the top-end of the innings in three different matches — eliminating batsmen placed at Nos. 1 to 4 and thereby denting momentum at a crucial stage: (1) Dinesh Chandimal setting off on a suicidal run after punching hard to extra-cover against the West Indies at 32/1; (2)  Angelo Mathews selling Lahiru Thirimanne down river in the game against England at 15/3 in the third over; and (3) Milinda Siriwardena performing hara kiri against the South Africans after he had scored 15 smart runs in 10 balls and lifted Sri Lanka to 75/2 in 9.1 overs.

The missed catches and odd misfield were perhaps less momentous in their consequences, except in contributing to the dampening of players' spirits as much as that of their saddened supporters. Chamara Kapugedera's terrible miss off Johnson Charles could have been disastrous, but Charles succumbed a little later. Nuwan Kulasekera's miss was embarrassing, but occurred when the match was in the West Indian bag.

The significance of sharp fielding in contributing to wins was displayed on several occasions during the World Twenty20 — none more so than Joe Root's catch at wide mid-off to dismiss Dasun Shanaka at 155 runs in the third ball of the 19th over when Sri Lanka was within a cooee (ho gaana) of the target, anemly, 171 runs. That strike was heading for a boundary, which would have made the score 159, leaving the batting team with 13 runs to get in nine balls. Mathews was still at the crease and Shanaka was on a roll, having blasted 15 runs in nine balls. That catch, in my surmise, won the match for England. The difference was a few centimetres… or, rather, a brilliant piece of fielding.

Finally, one can point to mediocre bowling with only Jeffrey Vandersay and Rangana Herath packing any punch via wickets — three wickets each and averages of 20.66 and 33.00 respectively. While Dushmantha Chameera chipped in with a good economy rate of 6.36, he gained no wickets. The rest of the bowlers produced little to write home about.

TWO: The mostly mediocre tales on the field of play could arguably be placed at the door of poor selections by both selection committees, that headed by Kapila Wijegunawardene and the coup d’etat team headed by Aravinda de Silva. These errors could also be laid at the door of longer-term failures over the two years after Mahela Jayawardene and Kumar Sangakkara retired. So, let’s move backwards in time beginning with the squad(s) chosen for the World Twenty20.

For one, from the distance of a seat in Australia it seemed self-evident to me that Lasith Malinga’s injury made him a lame-duck, one who should never have been  selected whatever the reputation. One cannot win tournaments on a wing and a prayer and a dicey hamstring. Grapevine whispers also indicate that these uncertainties contributed to hesitancies and kusu-kusu moments relating to the captaincy.

How these backroom conversations weighed down the team spirit is ground for speculation. One cannot answer this issue from a desk somewhere in the world without solid inside information from several cross-cutting sources. One outcome is clear: the contretemps rendered Malinga a lame duck in both body and spirit of commitment. Sri Lanka's team composition was compromised right at the start.

One can therefore ask: what if Sri Lanka had Vandersay in the park in that first match vs Afghanistan? Any answer will be as speculative as the sea breeze off Mount Lavinia.

The confusions around Malinga were (and are) a symptom of a deeper malaise. There were, perhaps, other questionable selections: Shehan Jayasuriya, Thirimanne, Sachithra Senanayake, Kulasekera and Kapugedera for instance. The caveat "perhaps" is vital. It is all so easy to pinpoint names AFTER the events. One has to specify doubtful choices before the tourney commences… or introduce alternative choices with a solid grounding to back your claims. I do not have the know-how to indulge in such an exercise.

Sri Lanka's selection committee was sacked days before the team's departure for the WT20 and a new panel headed by Aravinda de Silva, which included Kumar Sangakkara, then made some questionable changes to the squad. © AFP PHOTO

There is indirect support from a passing set of comments from Russel Arnold well after Sri Lanka was eliminated.

Thirimanne, he stressed on one occasion late in the day, "had given nothing at that vital No 3 position … [and it was] not as if there were a lot of runs behind his name coming out to the T20… the least said [about his choice] the better."

Arnold's comments and the statistics can be read as a devastating criticism of Sangakkara and de Silva for believing that Thirimanne would bring the requisite "maturity" (their conceptualization) into the composition of the squad.

That stressed, the question remains: who else would one have chosen as batsmen in the top six or seven in place of Thirimanne, Kapugedera and Jayasuriya?

It is a set of questions I cast into the air for those who have watched the domestic T20 matches over the last two years and who also have a good grasp of the pertinent statistics on the topic.

Recall, too, that Jayawardene and Sangakkara retired early so that SLC could gradually work out which players had the talent to fill their boots (however partially) in the different formats. In effect, this note highlights the basic reasons for the shortcomings in this project over the last two years.

There has been no stability in the governing board at Sri Lanka Cricket and in its selection committees. How can a long-term policy of nurturing players be instituted when the SLC board changes every now and then and the selection committee is altered on a whim and whisper!

Behind this instability, of course, is a further curse: that bloody sports ministry and its powers … and a political context that can produce new sports ministers at every monsoon. Capricious monsoons are not good for good consistent cricket.

1. Thirimanne's statistics indicate stark contrast between his capacities in the fifty-over format and the T20 (because his average in the former is a respectable 34.18 at a s/r of 72.23. I suspect that this contrast can be a feature in the story of other players — thereby calling for an analysis of the implications thereof.