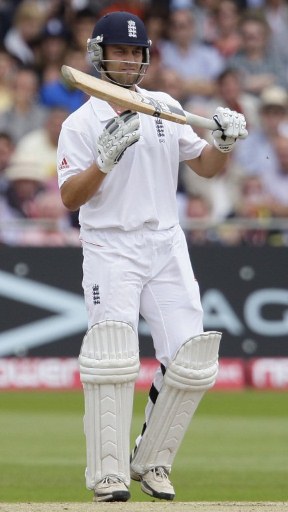 Demanding scope for the continuation of human error is a conservative, die-hard reaction that is as idiotic as it is specious
By Michael Roberts | February 19, 2012

When a person admired for qualities of sense, sensibility and intelligence adopts a position on a critical issue that is the height of irrationality and imbecility, it is both alarming and disconcerting. Such becomes the case for Mahendra Singh Dhoni when he reiterated India’s opposition to the fuller use of the DRS technology in adjudication.

Insisting that “human error” is an understandable facet of cricket, he went on to say: “we have seen people being really happy with DRS in one series when it goes in their favour and then it doesn’t go in their favour, they’re quite unhappy about it. I’m quite happy with the two umpires in the middle, the third and fourth umpires, the match referee and the scorer. If that ball-counting error still happened, it’s better off accepting it, because as humans we are bound to make mistakes.”

This has been the standard position adopted by Indian cricket’s governing body, the BCCI, over the past few years. Its present chairman Narayanaswami Srinivasan continues to insist that the ball-tracking technology is not fool-proof. As elaborated upon recently by Niranjan Shah, a former board secretary, the argument is that,

(a) DRS technology has not been subject to competitive bidding and has not been adequately tested by the ICC.

(c) it is extremely expensive.

For this reason “the human element must be preserved.”

This line of reasoning has been supported in various ways by Ravi Shastri, Sunil Gavaskar, Sourav Ganguly and Harsha Bhogle. So, Dhoni is just one cog in a long assembly of majestic vehicles servicing the Indian cricket establishment.

Ganguly gave the game away when talking to the Times of India: “Ganguly, who had played the series against Sri Lanka in 2008 when the DRS was first used on trial basis, said that the problems of the technology were extremely obvious as India could manage to get only one of their 20 referrals right.”

Precisely, say I in reference to the last phrase. That was as it should correctly be. It so happened that I watched most of that series with the benefit of a press pass which gave me views from up above and behind the wicket. The fact was that India succumbed to the combination of Muttiah Muralitharan and Ajantha Mendis in the two Tests they lost. As a new mystery weapon, Mendis snared 26 wickets during that series. A fair proportion of these outs were LBW; while in some cases the Indian referrals were denied because DRS confirmed the field umpire’s decision. One does not need to be a rocket scientist to understand why Mendis bowls from close to the wicket and tends to keep his trajectory wicket to wicket. He foxed the Indian batsmen from time-to-time and got their batsmen bowled or LBW. Dravid’s amazed consternation when he was bowled at the SSC was a sight for any cricket buff.

One dismissal that graphically underlined the virtues of DRS is sharply etched in my memory. This was when Tendulkar, batting at the southern end of the SSC grounds, swept a ball from one of the spinners and under-edged it onto his leg from where it looped in an ark for Tillakaratne Dilshan at leg-slip to take an athletic catch. No head umpire could have seen the course of the ball from his position but all the pressmen behind the keeper could. When Sri Lanka referred the decision to the third umpire, he reversed the on-field call. Tendulkar had to march off (reluctantly). Justice was served.

India’s dismay over the results from the DRS in this their first experience was exacerbated by the fact that their use of referrals was quite ham-handed. Losing the series two to one did not help their temper or, it seems, their mental acumen on this issue.

Grapevine gossip indicates that Tendulkar is among the Indian cricketers who are adamantine in their hatred of the DRS. Another vein of information from the MCC committee chambers remarks that Tendulkar has for long perfected the art of padding the ball with bat alongside. The DRS system threatens this subtle bending of the cricketing rules. In commenting on one of Bhogle’s essays on the topic, a perceptive cricket enthusiast named Ahmad Uetian, had this to say:

1) modern coaches teach batsmen to defend with bat in front of the pads and lot more modern day batsmen are using this technique. 2) Earlier batsmen would come on front foot and would play spinners virtually with their pads and conventional umpires would never give batsman out lbw in case of sppiner (sic) bowling and batsman playing on front foot but now umpires give such outs. 3) Now umpires like Simon Toufel and Aleem Dar who give higher percentage of lbw decisions are in ellte (sic) panel earlier good umpires were supposed to never give lbw.

Tendulkar may be a legend in many eyes. His obduracy on DRS reduces this status in my eyes. Gods must be pure.

Remarkably, a number of Indian reporters also remain hostile to the DRS. To my dismay, Sambit Bal, whose analytical writing I have always admired, displayed this antipathy when we met socially in Galle Fort in 2008. A young female journalist from Mumbai presented a similar face in parrot-like fashion when I raised the topic at Adelaide Oval the other day.

Counterpoint: Every student of cricket knows that on-field umpires make mistakes. Some of these errors can turn a game in favour of one side. Such an outcome is criminal. The introduction of DRS adjudication has reduced these errors without eradicating them. A recent study by the ICC of decisions during the World Cup indicated that verdicts were improved by more than seven per cent.

In other words, by insisting on the status-quo, Dhoni, BCCI and company are stating that they prefer a more deficient scheme of things to that which is better albeit not perfect. … so that, say, 85-89 per cent accuracy is preferred to 93-95 per cent accuracy. Ramesh Thakur, an Indian no less, got to the nub of the issue in pithy terms:

In rejecting the use of the best available technology to assist umpires and rectify the few mistakes they make, the BCCI has also shown itself to be a dinosaur. In effect, the BCCI position is: technology cannot guarantee 100 per cent accuracy, so we will stay with 80 per cent accuracy rather than move to 90 per cent.”

This means that Dhoni is among the dinosaurs on this particular issue. The fossilized character of those who defend the status-quo is underlined by the specious forms of reasoning that they bring to this debating table. “Nasser Hussain is jealous of India’s success,” said Shastri when Hussain castigated India for rejecting DRS in its fullest form. “The DRS is not bigger than the game” and should not submerge cricket argues Bhogle, wielding a grandiose cliché that is no less a smokescreen because of its elevated airs.

Demanding scope for the continuation of “human error” is a conservative, die-hard reaction that is as idiotic as it is specious. Can anyone sustain such an argument when reviewing the processes utilized for the maintenance of aircraft or the training of pilots? Certainly, the tracking technology within DRS needs to be continuously tested by skilled teams (and Tony Greig indicated that Cambridge University is pursuing a fresh testing at this moment).

Likewise, the technological teams at each match should be monitored in order to ensure standardization cross series/matches and prevent home-side bias and/or dishonest manipulation of mats and replays. Such fine-tuning does not negate the obvious superiority of the DRS system in reducing the number of on-field mistakes.

The arguments trotted out by Indians attached to the status-quo are as specious as they are imbecile. Both collectively and individually they can be tarred with a whole array of adjectives: one-eyed, prejudiced, irrational, obdurate and dogmatic.

Unfortunately the BCCI is also powerful. It has secured a hegemonic position in the cricketing universe. It is a standing indictment of the present ICC that it permits this Leviathan to bully the show and subject cricketing results to human error that could be obviated. The beauty of cricket is in its topsy-turvy character; but such vicissitudes should emanate from the hands and feet of the players not the fingers and nods of the umpires.