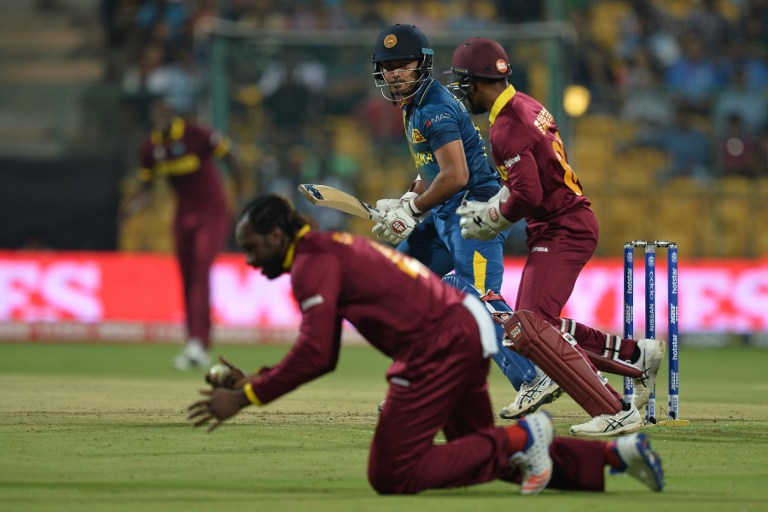 Sri Lanka slumped to a defeat against the West Indies recently at the World Twenty20 because of a combination of factors, some self-made, some Windies-made and some due to horrendous umpiring error. Assigning weightage amongst an array of factors is never easy and is inevitably conjectural. I side-step that problem. Just let me run through these 'forces' one by one, progressing in temporal order.

The umpiring was calamitous and it was Sri Lanka who suffered — not once, but on three occasions. I begin with this undermining force because the first blow was in the fourth over of the Sri Lankan innings when Tillakaratne Dilshan was batting effectively (12 runs in 10 balls) and the score was 20 — not great, but not too bad.

Brathwaite to Dilshan, OUT, and strikes first ball! Boy, that looked a bit leg-side at first glance but he's gone lbw. Full, angling into the pads, Dilshan aims through the leg side but misses. The umpire takes a long time but eventually the finger goes up. Oh dear, that's missing by a long way.

The TV commentators were as definitive in their assessment of the South African umpire Johan Cloete's terrible decision.

Was this stroke of misfortune decisive? Well, yes and no. It certainly undermined a reasonable start, but sides can recover from such moments. Sri Lanka did not.

They did not because of excellent bowling by Samuel Badree, Sulieman Benn and Dwayne Bravo, hara-kiri by Dinesh Chandimal, poor batting by a host of others, Andre Fletcher's striking innings; another clutch of umpiring errors when Sri Lanka were bowling and poor fielding.

Before one pounces on the umpires and the Sri Lankans who let the side down with bat and ball, it is important to take note of the effective West Indian efforts. Initially one could say that the Sri Lankan batsmen were simply bombinated and bamboozled by the 'three Bees': Badree, Benn and Bravo.

Badree and Benn stifled the batsmen at the start, while Bravo restricted acceleration mostly in the last clutch of overs. It was because he was stifled by Badree and Benn that Chandimal punched the ball into the covers and set off on a suicidal run, which Lahiru Thirimanne declined.

Thirimanne looked all at sea and did not last long. This particular innings (and some others in recent times) does raise questions about the evaluations presented by Kumar Sangakkara and Aravinda de Silva. Is Thirimanne now a liability? However, the same question can also be asked of Chamara Kapugedera who defeated himself in a dismal fashion and whose T20 international statistics at the outset of this competition were only marginally better than Thirimanne's.

More significant, however, was the difficulty shown by all the batsmen, including Chandimal and Angelo Mathews, in getting boundaries off the 'three Bees'. The bowling was sharp, controlled and excellent, true. But, the answer, let me stress, is not simple. How does one punch boundaries off Badree's skidding top-spin and other variations pitching at the bottom end of a good length? I would be stymied, but what can world class batsmen do?

One option may be to device a back-foot punch drive with a vertical bat that sends the ball over the bowler. A difficult stroke but one played by quite a few players these days — sometimes with horizontal tennis shot.  One needs muscle of the Kiwi Corey Anderson build to do this easily, practice with bowling machines may help.

But, you will say, Badree would then place a long-off and long-on. Great, you reply, and that means a single and sometimes a two available for one's orthodox shots; and Badree will not end with three runs only under his belt per over.

Bravo has foxed many a batsman with his mix of slow balls and variations. Mathews, a man who has hammered many a bowler in his time, was at sea. The answer for all our players is to study the bowling method and to go to the drawing board, namely the practice nets and bowling machines to perfect methods that can 'weasel' runs from these tricky missiles.

Several reporters have slammed the Sri Lankan fielding effort for the loss. The display was certainly ugly: two easy catches spilled in comical fashion by senior players Kapugedera and Nuwan Kulasekera, while Kapugedera and Thisara Perera combined to allow a boundary near long-on.

These however were less decisive in the final outcome than the umpiring errors. Kapugedera's miss was off Johnson Charles's bat in Jeffrey Vandersay's first over, the fourth of the innings, and he got out to Vandersay in the sixth over. Kulasekera's miss (off Andre Russell) was at 112/3 and when the match was in the West Indian bag.

In contrast, the umpiring errors that favoured the West Indian batsmen were not quite as bad as the howler that occurred with Dilshan, but took place at moments that may conceivably have swung the scales in favour of Sri Lanka.

In the 11th over bowled by Milinda Siriwardena, Denesh Ramdin was hit on the leg by a ball sliding in from the off. Though a close call, it looked out to me and the TV commentators, but "not out" was the umpire's verdict.

Siriwardana to Ramdin, no run, a much bigger appeal for lbw! This cannons into the pad as Ramdin plays forward. Was certainly pad first. Was hitting leg stump full on. Decisions haven't gone Sri Lanka's way today

Ramdin did not last long thereafter, but at this point the momentum of wicket may have assisted Sri Lanka.

The other was when the score was 94/3 and involved a snick from the key figure in the Windies's innings, viz., Fletcher. He snicked Dushmantha Chameera and Chandimal bent forward and sideways to take a catch. We all know that these are the singular moments when camera-work is subject to ocular obfuscation and foreshortening. After long deliberation the third-umpire, Simon Fry (Australian), ruled it not out.

15.1: Chameera to Fletcher, no run, edged, and caught! Chasing a full delivery outside off, Chandimal snaffles it very low to the ground. Fletcher stands there and it goes upstairs. Soft signal is out. Has Chandimal got his fingers under it? As ever, the problem with sending catches to the TV umpire. The third umpire, Simon Fry, is saying it has bounced. Fingers not under it? Third ump now wants the slow-mo again and zoomed in. Looks like the batsman will survive. And, yes, he does. Well, well…

ModernUmpsPlz: "What's Simon Fry looking at? Looks like it bounced to me too…. on his gloves!" Chandimal shakes his head, too

Hypocaust: "Looked like it bounced off the keepers finger and back into the gloves. Always going to be not out when the deliberation took that long though." At least you can hear the third umpire as he debates it, which I think is helpful (and transparent)

Sam: "Tough call. No one has looked like scoring except fletcher. Would have been a close finish had that been given."

More vitally, listen to the TV commentators. Ian Bishop is the fairest of men and he believed Fletcher should have been given out. With 94/3 becoming 94/4, Sri Lanka still had a slim chance of victory then (without or without a gail-wind from Chris Gayle).

So, that was that. For these many reasons, some avoidable, Sri Lanka was done and dusted by the West Indians.