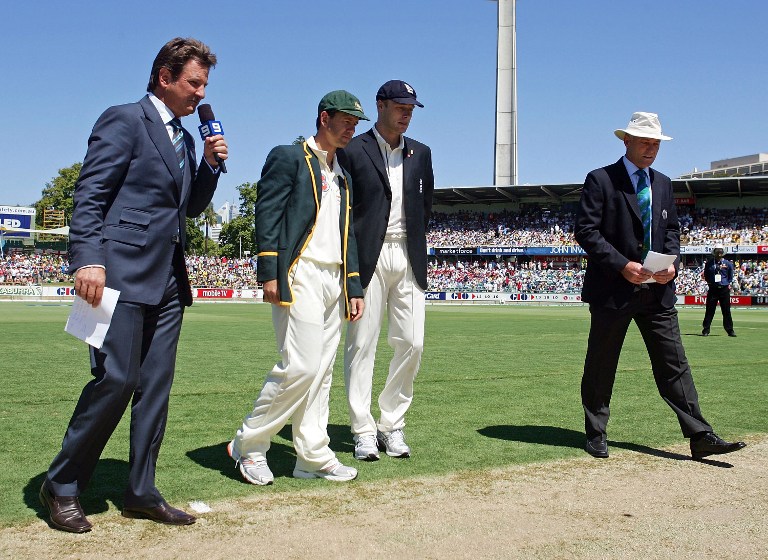 Confusion at the toss has reigned more than once. © AFP PHOTO

At the World Cup match between Australia and Sri Lanka at the SCG on the March 8, 2015, the designated home team captain (in this case, Michael Clarke) tossed the coin by stepping away from the cluster so that the florin landed some distance away. The match referee Jeff Crowe walked over and indicated that Angelo Mathews had called wrong, so Clarke and Australia were able to bat first on what turned out to be "a gem of a batting pitch"  (undermining the pitch-readings of the several 'experts' as well as the hopes of the Sri Lankan team).

Once the match was done and dusted, however, questions have been raised about the tossing result, claiming Clarke's move was a deliberate ploy designed to win a crucial call. Though not asserted explicitly, this outrageous allegation implied that Jeff Crowe was part of a conspiracy. Such accusations cannot be sustained, as Sri Lanka team manager Michael de Zoysa told me (on Skype, April 7, 2015) Crowe is a gentleman through and through, his rectitude impeccable.

As it happens, Crowe was at the centre of a right-royal tossing mess up at the Wankhede Stadium at the finals — finals no less — of the 2011 World Cup. On that occasion, Dhoni was the home team captain and Sangakkara was captaining Sri Lanka, while the stadium was reasonably full and, it is said, quite raucous.

Confusion reigned at the toss. An ESPNCricinfo report on the event is repeated below, but for my purposes here the sequence is best spelt out in point-form.

2. Though the TV crew in the operational room heard the call clearly, both Crowe and Dhoni, as well as Shastri, the TV compere at the toss, had not heard the call.

3. The toss was repeated all over again.

In retrospect, it has been my conjecture that Sangakkara and the team's brains trust tossed the game away. The dew late in the evening was such that India was able to chase down Sri Lanka's 265 with some measure of comfort. It would have been a good toss to lose because Dhoni indicated that India too would have batted first.

Team manager de Zoysa however disputes my reading of this match and the emphasis on the dew factor. In his view, Sri Lanka lost the match because: (a) Murali was nursing an injury and should not have played so that Sri Lanka could have deployed another bowler or bowling allrounder; (b) Sangakkara erred in removing Malinga from the attack when he had Tendulkar in trouble;  and (c) Sri Lanka dropped two catches at critical moments.

That is by the by. What is required now are some reforms in the toss protocols. The ICC must not permit chaos of this kind at crucial events in a contest and/or give room for the rectitude of the match referees to be brought under the gun. Transparency of process must be at a premium.

Some simple principles can be set up to bring about such a set of procedures.

A. The captain tossing the coin must be instructed to toss within close distance.

B. The captain calling must be instructed to shout loud and clear.

C. The skipper calling and the match referee must be wired with microphones.

D. The TV cameraman must be instructed to pan his camera over the florin to show the world how the coin landed before the match referee picks it up.

Simple really, one does not need Sherlock Holmes or even Watson to resolve this puzzle.