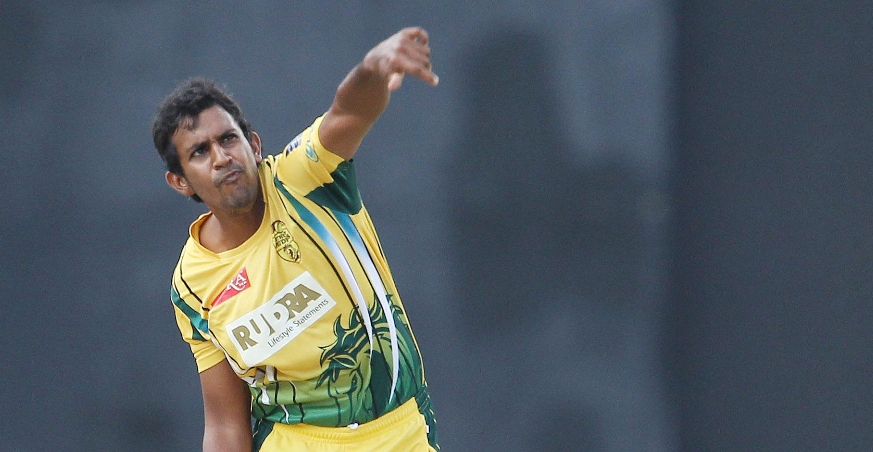 The 29-year-old made his first-class debut in 2004. © Ron Gaunt/SPORTZPICS

Despite a successful first-class career in Sri Lanka, you recently moved to Australia. What prompted you to give up your professional cricket career at home and move overseas?

I wouldn't say my cricket career in Sri Lanka is over, it is on hold. I needed to make some decisions in the best interest of my family. I've been pushing for a spot at the national level for the last five seasons and I gave it my all, but when it came down to selections, I've found myself on the wrong end of the stick. I'm currently playing grade cricket In Australia. It's frustrating and sad because most of the time I felt that I've been overlooked just to accommodate bowlers who weren't at their best at the time. I finally had enough. I'm enjoying my cricket now in a place where I feel appreciated for the performances I put in and I get rewarded. Cricket is not the only thing I'm left with — I worked for MAS Holdings for the last five years as a skilled HR professional and I have a degree in IT and Administration too.

Do you feel the selectors paid attention to domestic performances closely enough? Have there been any players in the last 24 months that you feel should have been included in national squads but were overlooked?

I think most of the time we pick players who are not in top form at the time they are picked, something which has always been the case. The selectors need to give players a proper run and then see how best we could replace them, or work on their techniques and help them get back, rather than pulling players' names out of a hat and expecting them to score a hundred or get five wickets. It doesn't work like that. I would rather see one new player picked and the selectors showing patience and working on that player, than having players coming and going at a rate.

What is it like to be a professional cricketer in Sri Lanka these days, what are the challenges that young players face?

We are yet to achieve professional status. A professional athlete requires a lot of areas to be fulfilled. Just because the cricket board contracts a certain number of players, that doesn't necessarily make them all professional athletes. A professional athlete would only need to worry about his game and on ways to improve. He would earn his living entirely through cricket, but you hear of many cricketers not being picked for tournaments and matches, which means there is a good chance that many players may not have any income. If a doctor or engineer can go overseas on a placement that earns them experience as well as a few extra dollars, why is it that cricketers are often labelled traitors of the country when they try to make a living overseas? Sri Lankan cricketers tend to go overseas in search of value for talent, as you get paid peanuts to play a first-class cricket in Sri Lanka. That is the sad truth.

I think the biggest challenge for youth players is guidance of career growth. The cricket board should take up an initiative to guide youth players, so that one day when you think your game is going nowhere, you would know what to do next in life. We need to give at least a few scholarships to players to continue their higher studies. Cricket coaching, administration, marketing and umpiring are areas at their young age you need to guide the players to, when it comes to back-up career choices when their cricket careers don't work out.

A few years back, SLC granted over 100 contracts to domestic cricketers, which helped many of them financially and allowed them to focus on cricket rather than seeking employment, what has changed?

It's a good initiative to contract players and help them financially. If you don't reach the national level as a player, you just end up at a lower income level unless you have educated yourself, or you must have the skills to change careers. Cricket in Sri Lanka for a first-class cricketer starts from November with the pre-season and ends in March. For an under-23 player, the season starts in June and continues until March of the following year. They will be required to pay for the cost of transportation, for training, equipment, nutrition and gym work. All of it costs a lot. I don't think the funds allocated for players is enough.

How much talent is leaving the shores of Sri Lanka and what kind of impact does it have on Sri Lankan cricket?

Many players move to England to play league cricket. Of late, players have been moving to Australia to play grade cricket or at divisions below that, just to find a decent income to support their families and live a good life. The season in Australia clashes with the Sri Lankan first-class season. When players leave and do not return to play first-class cricket, the quality of first-class cricket further drops in Sri Lanka. This is why you get so many players scoring hundreds and taking five-wicket hauls. It indicates that the quality of the opposition is really weak. It happened at the school level 10 years back, where you would rarely see a bowler take 100 wickets or a batsman score 1000 runs, but now it's a regularity. The standard is dropping. It's slowly creeping into first-class cricket too. You get outright results playing two-day cricket these days. Take for example the recently-concluded club tournament: the average overs a team batted in an innings was 60 overs. That's a concern for the future and I hope the cricket committees are aware of this.

We have a set of coaches who have been holding positions for the last 10 years or more and they would give the necessary advice to groom young cricketers. There will still be an impact to the quality of cricket, when so many experienced players leave the country, but no player is irreplaceable. Sri Lanka is full of talented cricketers who will take the game forward, because at the end of the day, we all love playing the game.

You recently tweeted that players were not being paid on time yet officials were, what's the story behind that tweet?

Cricketers are employees of the cricket board. The players are the main performers on the big screen. People pay to watch them, sponsors endorse them. Without the players there is no revenue. Yet, you hear in the media regularly about players not being paid on time. You have all SLC office staff and clerical employees working for a monthly pay, do you hear about them working for free and going for months without a salary?

How disappointed are you that you did not get an opportunity to play for Sri Lanka?

Very disappointed not to have got a game. Since my childhood that's what I have worked hard for by sacrificing a lot, basically a large part of my life, but that's how things go. I'm happy that I have a career in cricket. I took 10 wickets in an innings playing for St. Peter's College in 2004 and it was a national schools record, my spell of 9/46 in an innings for Colombo CC was the best by a spinner in Sri Lanka; and my 10-over spell with figures of 3/7 is the most economical bowling spell in a 50-over match in Sri Lanka.