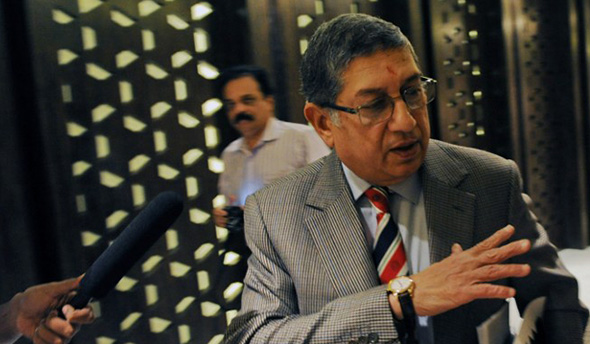 Wisden editor concerned by Big Three-led changes at the ICC
By Saroj Pathirana | May 24, 2014

Saroj Pathirana from BBC Sinhala Service spoke with Wisden editor Lawrence Booth on the Indian-influenced change to the governance and financial structure of global cricket. Excerpts from the interview are published below with prior permission from the author. The original interview published in Sinhala can be found here.

N. Srinivasan was removed as the head of the Indian cricket board by the country’s Supreme Court. © AFP

You have been highly critical about India, Australia and England getting a bigger say, almost veto powers in the ICC, why?

I’m concerned that England and Australia aren’t quite clear about what they are doing here in supporting India. They say they are safeguarding the future of Test cricket with this Test match fund, but what essentially seems to be happening is that India are enriching themselves even further to the detriment of some of the smaller nations, as a lot of funding will be cut to all the Associate teams below the top six, and though those ‘Big Three’ boards claim that there will be more money for the other Test nations, I think that remains to be seen. In any case, I’m not convinced Mr. Srinivasan, who is due to become the chairman of the ICC in July, should be heading up the global game.

But, on the other hand, Mr. Srinivasanhas not been found guilty of any crimes?

Indeed not, but there are question marks. Things are not going so well in India for him. He was asked by the Supreme Court to step down as president of the BCCI, while investigations are ongoing into the IPL spot-fixing scandal. His son-in-law Guruvappan Meiyappan has been in trouble for alleged links with illegal bookmakers in India, and there are all sorts of question marks over conflicts of interest with Mr. Srinivasan, the president of the BCCI, boss of the Chennai Super Kings and now it seems chairman of the ICC.

It looks like the argument by all three big nations — India, England and Australia — is that they are contributing more towards the ICC funding.

Yes, there’s certainly a problem there which has never been resolved: the fact that India generate 80 per cent of the world’s cricket revenues, yet they still get the same handout from the ICC as a country like Zimbabwe. But you have to remember that India, independently of that handout, make millions and millions of dollars from their TV deals. They make money that smaller nations can only dream about. They are already incredibly rich, and my question is: do they really need to get an extra-large proportion of the ICC money? I think what we’ll see is a system that is already affectively two-tiered — grow. The gap will grow between the rich and the poor, if India rake in even more money on top of their TV deals, and we’ll end up with a Test system that is inequitable. We won’t have games between teams competing on a level playing field. That’s not good for the game. We don’t want England, Australia and England breaking away from everyone else.

So what will be the end result of this two-tiered system, a split in the ICC perhaps?

No, I don’t think there will be a split in the ICC. Everyone wants to keep close to India, that’s their best way of survival. But teams like Sri Lanka, West Indies, New Zealand, who aren’t the big financial draws, and though the BCCI promised them series against those teams, it was effectively inducements to get them to vote for the paper. Once all those inducements have been and gone, what will we be left with? I suspect weaker Test teams for the smaller Test nations. Their players will be more tempted by the money at the IPL than they would be by Test cricket — that process has already started. The gap between the best and the worst [may widen] and [we could see] less interest in Test cricket.

Sri Lanka initially opposed this proposal, as did Bangladesh and South Africa. Then Sri Lanka, having abstained from voting in the first ICC board meeting, now say that they agree with the proposal because there have been some changes, is that true?

They wanted it both ways a bit, Sri Lanka. They didn’t want to be seen caving in to the Big Three within their own constituency of Sri Lankan cricket. On the other hand, they realise that you can only stand up to the Big Three for so long. It’s not going to get you anywhere. It might in fact be to your detriment. You don’t want to get off side with India, you need India’s tours to help bring in TV revenue and so on, so they’ve taken a pragmatic view. I don’t blame them for taking a pragmatic view.

You think the smaller Test nations have no other option than giving in to the pressure by the Big Three?

Yes, I think that the harsh and rather depressing reality is that that’s the case. If England and Australia had decided to take on the BCCI, and have got all the other full member nations on side with them, then there might have been a chance of stopping India and saying, ‘Look, we’re going to call your bluff. You go it alone and see how you can cope without us.’ But as soon as England and Australia, who are the second and third-most powerful cricket nations financially, sided with the BCCI the rest pretty-well had no choice.

Do you think England in particular should take a more ethical approach?

Yes, absolutely. England and Australia. They fought India for a few years, and they realised they couldn’t beat them. They will argue that they needed to do this because they needed India on the inside. They didn’t want India on the outside of the world game, and potentially destabilise the finances of global cricket. So they, like everyone else, took a very pragmatic decision. They are trying to present it as the saviour of Test cricket, well that remains to be seen. But we’ve gone beyond the point now where India can be properly challenged by the other nations, now that England and Australia are on board.