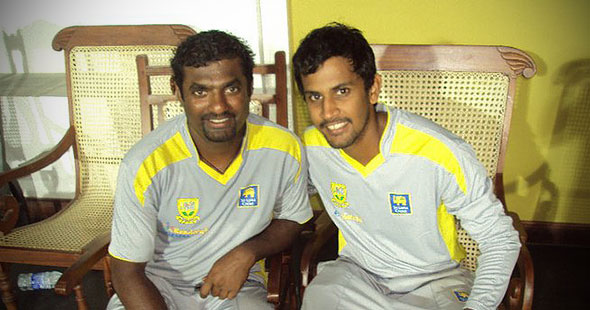 I was born in Riyadh, Saudi Arabia. My parents returned to the island when I was four years old. I studied at St. Peter’s College, Colombo and I went on to represent my school at all levels. I left school with a bowling record – I took all ten wickets in an innings against Wesley College in 2004. During the 1992 World Cup, my father was watching a match on television and I happened to watch it with him. From then onwards, I would read up on cricket and watch as many games as possible. Cricket became a part of my life.

Spin was an art that I have liked since childhood. It grew on me. Shane Warne and Muttiah Muralitharan have inspired me. My batting-style has been inspired and influenced by my childhood hero Mark Waugh.

I have a unique bowling action which allows me to spin it off different angles. I bowl leg spin and I possess several variations. I can bowl an arm ball, top-spinner and my own version of a flipper – a mixture of the arm ball and the flipper. My performances speak for my aggressive style of spin bowling.

I currently hold the record for the best first class bowling figures in an innings in Sri Lanka. In 2009, I bettered Muralitharan’s record of 9-51. I’m also proud to say that I have bowling figures of 10-30 in an innings against Wesley College while representing St Peter’s College (2004) and 9-47 against Moors SC while representing Colombo CC (2008). I’m grateful to my spin bowling coach Mr. Piyal Wijetunge who has helped me fine-tune my bowling and helped me achieve what I have. His knowledge and expertise has helped me vastly, as he was one of the best left-arm spinners in our game.

I believe each bowler is unique and offers different options to the captain. I aspire to represent Sri Lanka at the highest level. All of the comments I have received from the seniors has had an impact on my cricket. I keep learning from them.

It was a dream come true to play by the side of the legendary Muralitharan and bowl in tandem with him, taking the team to victory.

I also have a lot of respect for Rangana Herath. He is a brilliant bowler from whom I’ve learnt a lot from. Even in the game in which I got nine wickets against Moors SC, I remember having a chat with Herath. He was playing for the opposition. I remember him advising me on controlling and varying the pace of the delivery which would create more pressure. It paid off quite well. The following day, I grabbed nine wickets including that of Herath’s.

The dismissal I cherish the most is the wicket of Angelo Mathews who was out LBW off the very first ball. I pitched it just back of a length and Mathews went on the back foot, the ball skidded through at him very low, right in front of the stumps. My perfect dismissal would be to get one to drift into the batsman from off stump, drop in the air and spin out, beating the batsman to hit the top of off stump. I’m glad that I have experienced such dismissals.