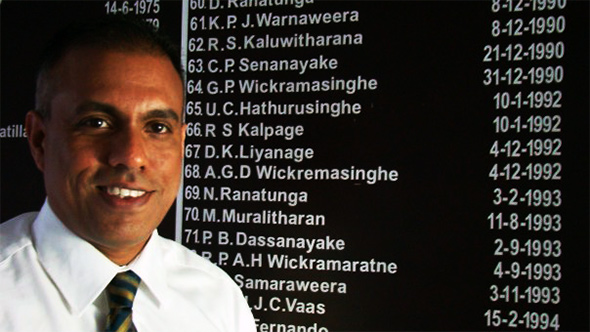 Earlier this year, Charith Senanayake was removed from his position as team manager over incidents that took place while the national team was on tour in Australia. Senanayake spoke to Island Cricket in an exclusive interview this week to discuss the circumstances behind his removal and the current state of affairs at the cricket board.

How did your relationship with SLC sour?

Firstly, I must stress that I have nothing personal against Nishantha Ranatunga or any other individual. I am merely disclosing exactly what happened in order to clear my name, as I was framed as the bad guy. I am only the fall guy.

Before being the team manager, I was head of marketing at SLC. I was responsible for securing sponsorships, TV tenders and other revenue-earning ventures for SLC. My goal was only to ensure that the cricket board received the best deal, whilst protecting the SLC brand and increasing its value. I was never reluctant or afraid to point out any agreements or deals that would have a negative impact on the organisation, but that may not have suited some elements within SLC. After having secured many deals for SLC, including the Mobitel, Reebok and CEAT sponsorships to name a few, I was strangely removed from my post, which I believe was done because I had pointed out some lapses just before the 2011 World Cup to the board and the negative impact it could have.

After Mahela [Jayawardene] was reappointed as captain, my name was proposed as team manager because I had worked with Mahela and the team when we last beat India in a Test series in Sri Lanka. Nishantha, the secretary of SLC, initially opposed my appointment, but the decision was apparently voted 6-1 in my favour at the executive committee meeting. He even brought this to the notice of the sports minister, trying to stall the appointment. To his dismay, the executive committee decided to stand by their decision at that stage. From that point onwards, he was waiting for any opportunity to get rid of me.

When I returned to Sri Lanka with the team after the tour of Australia earlier this year, I was immediately suspended over what they claimed was a breach of contract. The main charge against me was that I had interacted with the media directly while on tour in Australia, but the story begins well before the Australian tour.

During the first Test in Galle against New Zealand in November 2012, the then skipper Mahela, in front of me, asked Nishantha to help some of the senior players disburse funds owing to them from the ICC to support staff who had helped the team during the 2011 World Cup campaign. Nishantha then asked Mahela to send him all the details and the list of beneficiaries. The players had decided they wanted to reward support staff with funds the ICC owed them. They named the support staff who were with them right throughout the World Cup campaign, including ground staff and curators. This was not SLC money, it was the players’ money.

Mahela personally handed a letter with the list of names of the beneficiaries to SLC’s accounts division, with Nishantha’s knowledge. This letter was leaked to the media during an important Test series in Australia. The players were made to look bad with incorrect information, and they felt that they were being disgraced. Mahela, on behalf of the team, then wanted to respond to the paper over the allegations with a clarification since SLC refused to investigate, mediate, resolve the matter or assist the team.

An article published in the Daily Mirror newspaper was well timed to disgrace the players just before the Boxing Day Test. It was very demoralizing for the players. I am fully convinced that it was someone from the executive committee that leaked the letter to bring disrepute to the team and the country. The person responsible should be found someday and action must be taken. Instead, they suspended me and swept the issue under the carpet.

The moral of the team was low due to this, and their focus was on these off-field events. I feared that they will lose perspective on the field. I wanted to defuse the situation. Since the team had no other option to express their views or clear their names, the team collectively sought my assistance in contacting the media. Providing Mahela my e-mail facilities, whilst the team was on tour, to respond to these damaging claims made as a result of SLC leaking confidential information to the press, is one of the reasons for my removal. Had the letter not been leaked in the first place, there would not have been any need for clarification. My only involvement was to allow Mahela to use my e-mail account to send the clarification to the paper, when the team was in transit from Hobart to Melbourne after the first Test.

I can confirm that Nishantha initially agreed to take care of the matter for the players. But later, he, together with some members of the SLC executive committee, let the team down badly by rejecting the players’ request to pay support staff. They made all sorts of spurious claims to the media about why they rejected it. SLC, perhaps desperate for funds, may have wanted to keep it in their account as long as possible. The whole thing was beautifully orchestrated.

The paper that received the leaked letter portrayed the players as traitors before an important Test match, and the players were pretty emotional. They felt let down. The support staff on the list were faced with various allegations after the article. People claimed they were taking bribes from players, and they were ridiculed. Based on what transpired, players had every right to express their side of the story, but were deprived. Perhaps I was wrong in allowing the team to use my email account, but in my view, it was the best thing to do at that point to bring the situation under control, and give the players some peace of mind.

Apart from that, SLC also claimed that I did not show up for work after the tour, which is a total lie. I had applied for leave before the tour was over, and it was approved by Ashley de Silva, who was the head of operations at the time. The final charge against me was over a misdirected SMS to Nishantha, calling him names which are not printable. All charges were dropped after the initial disciplinary hearing, but a new manager was appointed before the proceedings ended. Their only goal was to remove me over bogus allegations and appoint someone who would happily toe the line.

Who gained from your removal?

I did not write the letter to the press or provide any information to the press. I only allowed the players to use my e-mail service, and they contacted the media with a clarification. They could not take action against Mahela and the whole team. I have good reason to believe that they chucked me out because it was the perfect opportunity to reward the person that dropped out of the last SLC election to allow Nishantha to win uncontested. That individual is now the team manager. With my removal, Nishantha has the team manager, some of the coaches, selectors — all his right-hand men — in place to control things the way he wants. I was a thorn in his side. I was an obstacle.

What do you think of SLC elections?

It’s not free and fair, and it’s politically influenced and manipulated. How can such a key position like the secretary’s post go uncontested? It is true that you do need the support of the government for SLC to function because of the Sports Law, as it supersedes SLC’s constitution and other sporting establishments’ constitutions, but the entire process is influenced by politics at present, which is detrimental to our cricket and all sports.

There has to be a democratic process. This has been violated greatly. Politicians place individuals who they feel they can trust, but those individuals end up damaging the reputation of the politicians who back them because they are not qualified nor skilled to hold such important posts. I don’t think the politicians realise that these people also want to fulfil their own personal agendas, and they will eventually take them for a ride too. You need qualified people genuinely committed to the betterment of our cricket, not goons with hidden agendas. I don’t think even the current SLC chairman knows of what is happening behind his own back. Most of the officials are there just to fill a post. The government must assist in bringing in a truly democratic process for elections, as well as a professional corporate governance structure without undue influence from outside entities. The public are outraged, and the fans are now finally fed up. There is even a petition being circulated, which hasn’t happened before.

Some claim that SLC is a one-man show run by the secretary, do you agree?

Yes, it is a one-man show. It’s Nishantha’s way or the highway. Just see how SLC is bankrupt under his tenure. The 2011 World Cup was a huge loss. The SLPL was a disaster under his watch. SLC handed broadcast rights to CSN when Nishantha was CEO of CSN, which shows us the level of governance at present. All this makes you wonder if the deals and contracts signed, and the agreements SLC gets into, are for the benefit of officials and their personal financial interests, or for the benefit of cricket in Sri Lanka. Nishantha’s reign has been catastrophic for Sri Lankan cricket as a whole.

What do you think of the SLPL fiasco?

The public may not be aware of this, but the concept of SLPL was my idea when I was head of marketing at SLC. I proposed this to supplement SLC’s income, and my proposal included SLC having full control of the tournament. What they ended up doing was to hand the entire tournament to an outside party [Somerset Entertainment Ventures], including marketing rights, with nothing much left for SLC. The whole bidding process was questionable, but it was pushed through mainly due to the influence of a very powerful person.