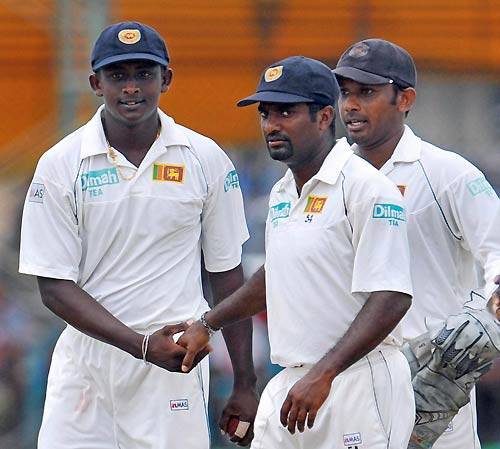 Sri Lanka’s cricketers came under attack in Pakistan when gunmen stormed their convoy and attacked the coach carrying the sportsman and match officials.

We posed a few questions to Murali with hopes of understand what he was put through that day.

Where were you seated on the bus and who were you sitting next to?

I was in the center of the bus seated next to Lal Thamel, the team Masseur. Kumar Sangakkara and Thilan Samaraweera were seated in front of me.

What was your reaction when you first heard the gun shots?

It was an automatic reaction to duck and hit the ground as soon as possible. That’s what I did.

Did you see the gunmen getting out of a car in front of the bus? Some reports claim they were hiding in bushes, some claim a car obstructed your bus, and the gunmen came out of the vehicle.

As I laid face down on the floor there was nothing I could see. What I know is what I heard later from the driver. Two cars reversed towards the bus to block its path. This is what I was told.

How long did it take from the time the first shot was fired for the bus to get into Gadaffi Stadium? How long were you exposed to the attack and the gunfire?

It all lasted no more than five or ten minutes and then we were in the safety of the stadium.

Is it true that the bus driver froze in shock and it was a yell of “Go – Go – Go” by your team mates that sprung him into action? Who was instrumental in getting the players to hit the floor of the bus so quick and who asked the driver to get you out of there? Was there one person on the bus that coordinated the escape?

I cannot confirm whether the bus driver froze but I did hear the shouts of “Go, go, go” asking him to go towards the stadium. It is obvious the skill and courage he showed in driving us to safety when bullets where whizzing by was priceless.

We all owe him the kind of gratitude that cannot be explained and never to be forgotten.

Honestly, as a player who has traveled many times on tour I never paid attention to the security details. My focus has always been on the game at hand. The security presence around us is now a common thing everywhere we go. I never had to think about it or compare it to know if there was more or less security provided.

I do not wish to comment on this at this time.

OK. There was an article published a few days prior to the attack stating that the management had requested more security. Where you given more security in Lahore than in Karachi?

I really wasn’t taking any notes on which of the two cities had better security. It had never been one of our priorities.

Before the attacks did you feel that the team would be targeted? What was the reason more security had been requested?

I personally never thought the team would ever be targeted, but I knew that Pakistan had its own share of security concerns.

After these attacks what is your opinion about going to India this year for the IPL? Do you recall what the security measures were like in the first season of the IPL? Can it cope with the demands of today’s terrorist?

Pakistan and India are two different countries. There is no doubt now – after what happened – obviously the focus will be on greater security for the players.

You survived a ghastly terrorist attack that targeted you and your fellow team mates. In hindsight what do you think is required to prevent such a thing from happening again? What do you think was lacking? Does SLC need to improve its own security at home?

I am not a security expert but I think now the administrators and the security experts will plan pro-actively to ensure better measures are in place. The consequence of an attack is better understood now than ever before.

Murali, on behalf of Island Cricket and it’s readers we are extremely grateful to you for providing us with this opportunity. We wish you continued success as Sri Lanka’s new vice captain.