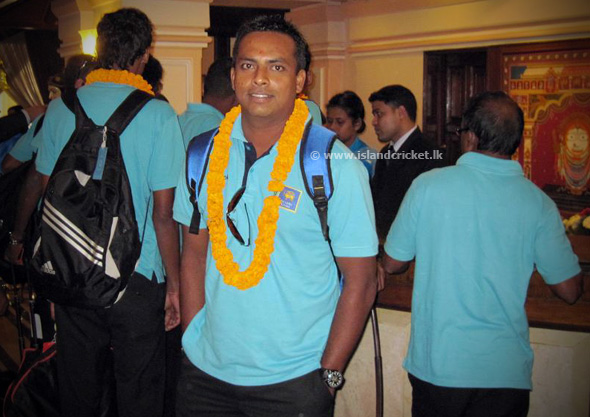 April 03, 2010 (islandcricket.lk): Muthumudalige Pushpakumara made his debut in that infamous match against India played at the Feroz Shah Kotla in Delhi, where the match was called off due to a ‘Dangerous Wicket.’

An experienced and accomplished all-rounder in Sri Lanka’s domestic scene, Pushpakumara only made his debut in 2009 at the age of 28. He speaks to Island Cricket’s about making his debut so late into his career. He also shares his views on the recent expansion of player contracts which included players like him from the Sri Lanka-A squad and the pay package included with the contract.

Muthumudalige Pushpakumara with the Sri Lankan team as they check-in to their hotel in Cuttack while on tour in India, 2009.

You had a prolific school cricket season in 1999 where you scored over 600 runs, picked up over 60 wickets, and  took 26 catches. You were also awarded the ‘Player of the Tournament’ award in the 2007/08 Premier League. But you only made your debut at the age of 28, in 2009. Do you think you could have played for Sri Lanka much earlier, or do you feel the timing was right and you gained valuable experience at the domestic level?

To be honest, I was extremely worried when I wasn’t selected for so many years.

Yes, in a way I think the timing was right for me because I gained lots of experience at the domestic level and I became more mature as a player. I’m just glad that I got that chance to represent my country even at this age.

All these years I have been so determine to play for my country, and I’m happy to have achieved that goal finally. I hope to represent Sri Lanka again in the years to come.

At the age of 18 you were selected for Sri Lanka’s tour to Pakistan. But it took the selectors almost 10 years to give you an opportunity to make your debut. This must have been incredibly difficult for you?

On your ODI debut, during Sri Lanka’s 2009/10 tour to India, the match was called off after just 23.3 overs as a result of a ‘dangerous’ wicket. A few weeks later you got another chance to represent Sri Lanka, this time in Bangladesh, but unfortunately you tore your shoulder muscle and had to return home. Has the injury healed? 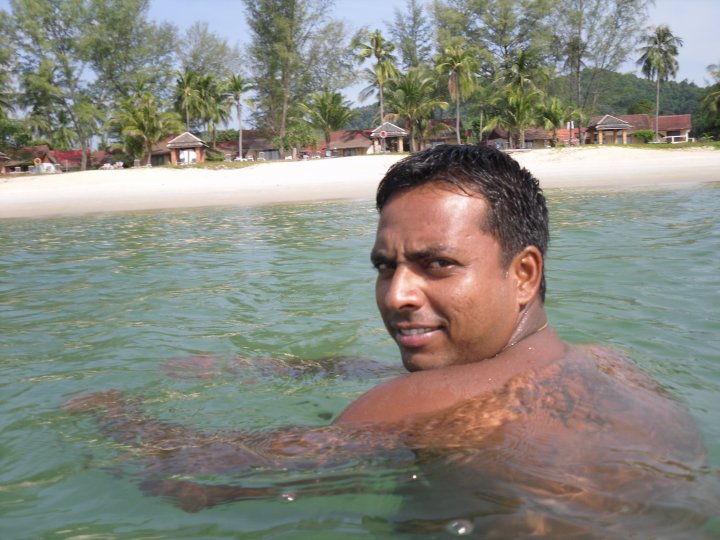 I have been playing Twenty20s for my provincial side – Basnahira North. The shoulder is a lot better now. It hasn’t fully healed but I am recovering fast.

SLC recently expanded on player contracts to include players from the ‘Sri Lanka-A’ squad. You are one of the players who received a contract. Are you satisfied with the pay package and the terms of the contract? How much does a contract help an upcoming cricketer?

Yes, I am satisfied with the pay package and the terms of the contract. The pay package definitely helps an upcoming cricketer immensely because they can concentrate on their cricket rather than worrying about a job. And in receiving this contract it allowed me to spend more time on the ground for my training.

Sri Lanka has a history of selecting cricketers who can bat as well as bowl. You are an all-rounder yourself. Should young cricketers focus on both disciplines at an early stage?

At the early stages young cricketers definitely have to concentrate on both batting and bowling. In the modern game fielding is a very important factor as well. I think the young players must focus on all three aspects if they want to make it big in this game.

Focusing on your bowling, do you bowl any variations, or are you a traditional off spinner? Do you have a Doosra in your armoury?

I am mostly a traditional off spin bowler but I can also bowl the Doosra.

At which position in the Sri Lankan ODI batting line up would you like to see yourself slotted and why?

I would like to bat at number seven because I consider myself as a batting all-rounder.

Muralitharan is a legendary bowler and he is the best I have faced. It is hard to pick him up and also not at all easy to bat against him. The best batsman I have bowled to is Mahela Jayawardene.