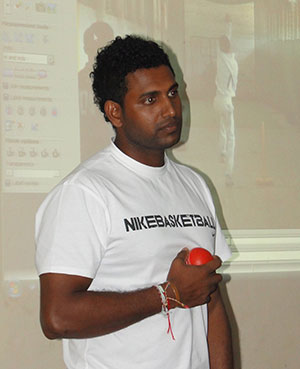 The national team is not the place to try out new players or experiment, says former Sri Lanka cricketer Prabath Nissanka, who is currently employed by the cricket board as assistant fast-bowling coach of the national team. Nissanka also cautioned that areas which produced cricketers, like the south and central parts of the island, have slowed down in producing talent. The 32-year-old former Matara schoolboy spoke to Desmond Samith, excerpts of the interview below.

I love sport, and I can say that I’ve got everything in life because of cricket. As you know, I had to stop my playing career because of injury. However, I wanted to be involved in the game, therefore, my next option was coaching. First, I learnt fitness training and worked with the under-19 cricketers. Step-by-step, I acquired the necessary education in coaching. I went to Australia and did the level-two and three courses, and got promoted as the national assistant-fast bowling coach [in Sri Lanka]. I worked with Anusha Samaranayake and then with Champaka Ramanayake. Now I’m working with Chaminda Vaas. I train bowlers at the cricket academy, but my main responsibility is with the junior squads.

Does experience at the highest level come handy when one starts coaching?

No doubt, it’s a big advantage. You can share all your experience with the players you are working with, but, personally, I think a coach needs to have enough qualifications in his field. When experience and qualifications come together, your coaching gets some added value.

Sri Lanka is known as a place that has a good cricket structure at school level. Are you happy with the role the school coaches play when it comes to fast bowling?

I think more and more ex-cricketers should get into coaching. The coaches need to understand the game. We are working with school coaches on the importance of fast bowling through Sri Lanka Cricket’s education unit for coach development. At the same time, we conduct talent-search programmes. In our training courses, we correct the mistakes of the bowlers before the eyes of their coaches. The coaches need to understand the game as well as the players from their young age. Today, fast bowling is back in focus following the introduction of the latest playing rules, so it’s very important to produce fast bowlers who understand their role as match-winners.

How does the latest playing rules in ODI cricket assist fast bowling?

Now, two balls are used from each end. The hard ball encourages fast bowlers, but with the new rule on field setting, where you need to have five fielders inside the 30-yard circle all the time, you just can’t set a defensive field. However, I think you need to look at all these things in a positive way. If they work hard, the bowlers can improve. They need to do so, as they are more often called up to win matches. T20 cricket has improved the skill-levels of bowlers, as they looked to add variety to their bowling. They learnt to bowl yorkers and slower balls. Their thinking pattern changed.

Are you happy with the opportunities and the exposure the local coaches are receiving?

I think this is one area Sri Lanka Cricket needs to address. We are doing what we can, but we don’t have enough facilities to help coaches. I feel all our top-level coaches — national coaches and provincial coaches — should be sent abroad for training. Not only coaches, but also physiotherapists, fitness trainers and everyone. Give them enough knowledge. Australia, South Africa, England and even India have taken up coach development very seriously. In those places, players are exposed to a professional set-up from their early days, as the coaches, physiotherapists, trainers and masseurs work in such environments.

But there is a case of the country losing top coaches, as they often migrate seeking greener pastures?

Many say the country is losing coaches, but I look at it this way: When we keep our coaches here, in a way, they get stagnated. A coach may work well for the country, but when he gets an opening to work somewhere else, we need to encourage them. It’s a new, different experience. It won’t go to waste. In those countries, the working environment is quite different. We, as coaches, learn a lot there. Their mindset is different, and their approach is very professional. This experience will finally help the country that produced that coach. Look at the world’s top coaches. They all have worked with different teams in different places. It’s a huge experience. I think what we need to do is expose our coaches to these places, and gradually get them back to work here, offering them good salaries. We need to adopt such a system.

Of late, there has been much emphasis on developing cricket. How do you look at this?

I’ve observed that the interest levels of the game have fallen. In some areas, cricket has just stopped. I think we need to pay attention to the areas that have produced many Sri Lanka cricketers. Places like Matara, Galle, Ambalangoda, Kurunegala and Kandy produced a good number of players in the past, but it’s not really happening now. Cricket is not taken seriously in some of those places. Why? I think this happened when everybody started going to Colombo to play cricket. Everybody started joining Colombo schools and clubs. Now these places are neglected. We need to encourage the clubs and schools in those places, giving them enough facilities and money. There is no wrong in finding new places to develop the game, but we should do that without abandoning the places that have traditionally produced top cricketers.

Cricket selectors play an important role in forming a country’s cricket identity. What’s your take on the present panel of selectors?

I think this selection panel, led by Sanath Jayasuriya, is a good one. Hashan, Pramodya, Eric and Chaminda Mendis all of them played cricket. Three of them were in the ’96 World Cup winning team, so it’s a good combination. If they can’t do a good job, I think nobody else can. But, we need to think all the time that we are doing everything for our national team to win matches, therefore, always the best available team should play. The form of the players is very important. For me, the national team is not the place to experiment players, as your focus is on winning matches. You have the A-team to try out players. If you want a very good national team, you need to have a good A-team as well. The A-team should have experienced players as well as young players. When you just put young players in the national team, soon their weaknesses get exposed. The A-team needs to have a good number of tours, at least five or six per year, then only you can develop players. We need to accept that our first-class cricket is not that impressive, so developing the A-team is the answer.

Statistics show that strike bowler Lasith Malinga has struggled against India. He is simply unable to make inroads into the Indian batting line-up. If you were the national fast bowling coach how would you advise him?

I just can’t answer that question while being here, I need to work closely with Malinga to do so. We need to see why it’s happening. I think we need to plan well against India. They are the best team in the world, no two words about it. We need to see what their mistakes are, and the other thing is Sri Lanka should start looking beyond Malinga. We need more match winners. We see the Indians are not playing genuine quick-bowlers all that well. We saw this in the ongoing West Indies tour, when the bowlers touched 145 km/s, so this is one area we have to work on. Again, we have to look at Malinga’s confidence level; he may have low confidence levels, as everyone has started talking about his failure in finals, or his poor performance against India. It may be working in his head. He needs to identify his mistakes as a bowler, and maybe work on his lengths. We need to go deep here.

Thisara Perera, who made a name for himself as Sri Lanka’s second all-rounder after Angelo Mathews, has been dropped. This is after he played for more than eight months in the ODI team and after a man-of-the-series performance.

Thisara is a good cricketer who can be used for many more years. Although many think he can’t bowl fast, he is quite capable of bowling really fast. We have seen that. One makes a mistake by considering him as a pure batsman. He is a paceman who can bat. His strength is his bowling, so give him enough opportunities there. I think the mistake he is making now is he is not consistent with his line and length. Line and length is his strength. He’s a wicket-to-wicket bowler. He gets batsmen out LBW or bowled. He has not done well recently, but I’m sure he’ll come back strongly after this break.

What does the future hold for you as a coach?

My ambition is to be Sri Lanka’s pace bowling coach. It’s a long-term goal. I’m working hard for it. If I get there, then it will be with all the necessary qualifications. Soon, I’m going to Australia for further studies and training. I’m going to work not only on coaching, but also on fitness training and player management. I’ll look to cover all these areas. Then only can I be a good coach.