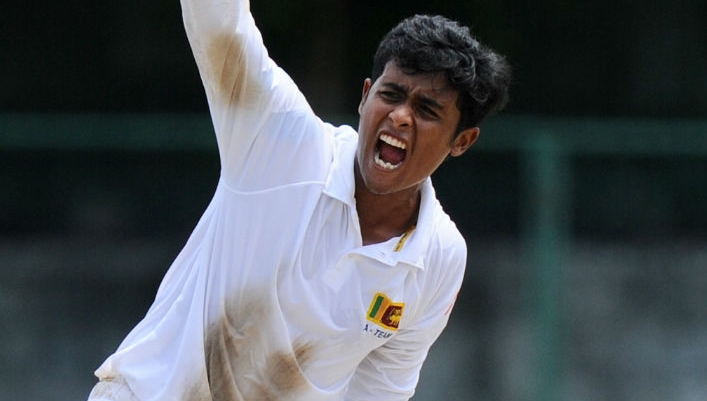 Leg-spinner Jeffrey Vandersay, 25, bagged an eight-wicket match haul against Pakistan recently in a tour match between the visitors and Sri Lanka Board President's XI in Colombo. He has since been selected in a 14-man squad for South Africa Emerging Team's tour of Sri Lanka, which begins later this month. Vandersay spoke with Island Cricket's Daniel Alexander recently, excerpts of the interview below.

How did you take to bowling leg-breaks, who introduced you to the art? Have you always been a spinner?

When I was little I used to play cricket with my elder brother and I used to bowl spin, although I didn't even know what it was called. I remember my brother telling me to bowl spin when I started playing cricket for school, so I guess my brother was the one who encouraged me to go ahead with leg-breaks. And, yes, I have always been a spinner.

What types of variations/deliveries do you possess?

My stock ball is leg-spin and I also bowl a top-spinner, googly and a slider. I am still working on the flipper.

Spin legend Muttiah Muralitharan was recently quoted as saying that it was important for spinners to focus on turning the ball as much as they can and focus about variations later, are you a spinner with the ability to spin the ball profusely? Are you working on that aspect of spin bowling?

Yes, the great legend is correct. You need to spin the ball in order to trouble a batsman at the top level. That's why he was able to take 800 wickets. I do like to think that I spin the ball too. I need to work on it more though.

You had a good outing during the recent tour match against Pakistan, can you talk us through that performance? What worked for you? What type of deliveries got you wickets and troubled the Pakistanis?

Yes, it was a great match for me. I was happy to perform well against a good team that bats well against spin. My plan was to keep it simple, bowl more stock balls and only a few variations in between. Out of eight wickets that I took, just one wicket fell to one of my variations, which was a googly.

What is your favourite format? Test, ODI or T20?

Test cricket is my favourite.

Who are your spin bowling idols?

Who is your all-time favourite batsman and bowler?

What is your most memorable performance thus far?

The most memorable moment was taking five wickets against Pakistan. I think that tops all my other performances.

Who has been the toughest batsman to bowl to?

Of course it's going to be Kumar Sangakkara.

You have been named in the Sri Lanka Emerging team to play South Africa, your thoughts?

It's a great privilege and a wonderful opportunity to gain valuable experience by playing against another nation.

What is your opinion on the recent change to the ODI rules?

I like the new rules. I think now the game is well balanced for both batters and bowlers. As cricketers, we need to get familiar and adapt to the changes as soon as we can, because it could change again in a few years' time.