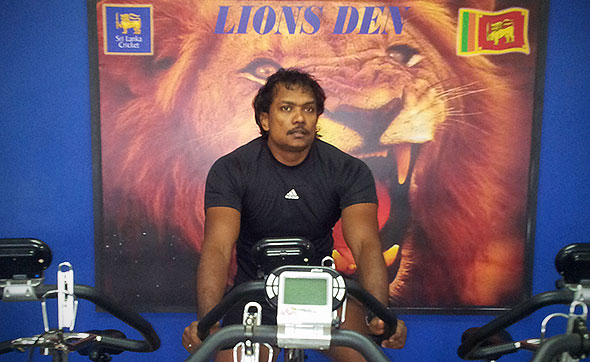 How long have you been working with Sri Lanka Cricket?

I have been working here for 16 years. Over the last eight years, I’ve been the fitness trainer for Sri Lankan cricketers. I started along with CJ Clarke. When I first came here, I was interested in training Aravinda de Silva. I wanted to work with him, as it was my early days and he was a world-class player. I was indeed happy to see him performing well. At that time, I remember Lasith Malinga was still an under-19 player; I spotted his talent and was supervising Malinga with the help of Clarke. Because he had a unique bowling action, we had to work hard on his fitness levels in order for him to have a fruitful future.

Can you tell us more about Malinga and his injuries?

Malinga caught my attention as an under-19 player with a unique bowling action. At the time, he was still an emerging player. I realised that he had to be supervised all the time and we had to pay more attention on his fitness. I have been working on his rehabilitation exercises and developing his fitness level. Malinga is a hard worker and a dedicated person.

Who else during that period did you identify as an upcoming talent?

Well, the next person I came across was Angelo Mathews. He was a great performer and a special talent. To be honest, Mathews was too busy with his match schedules. He had a very limited time to work on his fitness and weight training. However, his skills were far more developed than other under-19 players and he was very mature for his age. As he was an all-rounder, we had to balance his fitness with his batting and bowling skills. We paid special attention to him, as he is an asset for our motherland. Mathews is a positive player and I knew at that time he will one day be a star player for Sri Lanka.

Several players of late including Ajantha Mendis, Dilhara Fernando, Farveez Maharoof and Nuwan Kulasekara have been on the injury list. How are they faring?

They are in the process of recovery. We are working on rehabilitation, physiotherapy and their fitness levels. I wish all of them a speedy recovery.

Which player was the hardest to deal with when working on their fitness?

Akalanka Ganegama. Along with his dancing skills, I had to be more watchful and cautious with his fitness because both of his skills [as a performer and an athlete] had to be developed simultaneously. It was interesting working with him because we would be able to see some of his singing and dancing skills at the gym.

Who is the fittest player you have worked with?

It’s Sanath Jayasuriya. Even with his age, he maintains a great fitness level today. He has been doing that throughout his career. Believe it or not, being a parliamentarian and a professional cricketer with a busy schedule, he still visits the gym three times per week. Jayasuriya is very dedicated in maintaining his fitness level and being fit. Whether you’re a cricketer or not, you have to maintain a healthy fitness level in order to have a healthy life.