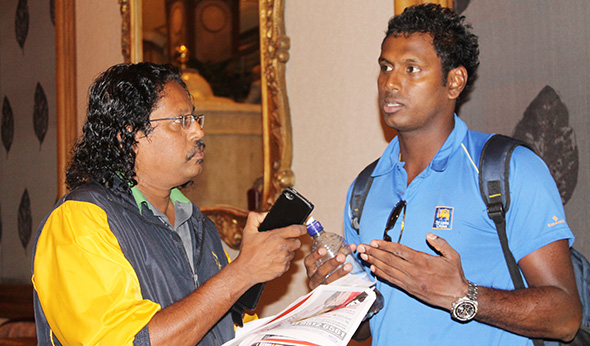 Angelo Mathews on captaincy, the tour of Australia and more
By Vernon Tissera | February 21, 2013

As the new skipper of the Twenty20 side, you were able to achieve the feat of winning overseas, with victory in both T20 games against Australia.

We played well as a team. Our inability to win the Test series and the one-day series served as great motivation. During the two wins, I believe the mix of experienced players as well as the youth in our team served us well. Youngsters such as Kushal Janith [Perera] played extremely well and showed that they have a bright future ahead. I feel, as a team, we played fantastically.

With regards to your leadership, pundits back in Sri Lanka speak about your lack of leadership credentials and that you are too inexperienced. With the T20 series win against Australia, you’ve provided a great response.

I think everyone is entitled to their own opinion. The biggest thing for us as a team is not to let outside opinions affect the way we play our game. In sports, there’s always going to be a winner and a loser, therefore, one single team cannot always win. I hope that the fans can understand that. The main focus for us is to not let external comments, whether they be positive or negative, into our head, but rather play to our full potential.

Despite the dismal start to the tour, Sri Lanka finished well under you and you appeared to tackle the challenges presented to you particularly well.

I think it was a big challenge. It is never easy to take up a leadership role in any team, let alone an international team. We are playing an international game, representing our country, we must ensure that we keep our country first and always play with confidence to win. The challenges were not just for me, but for the team as a whole. At times, we do let our country down and fail to achieve victory, but whatever the result, the team always does its best to play well and to win.

Whenever Sri Lanka plays against Australia in Australia, the crowd support you receive from your fans must be heartening for the team? After you won the final T20, you instructed your team to go towards the Sri Lankan crowd in the stands and show your respect. This moved many of us who witnessed it.

With the crowd support, it feels like we are playing back home in Sri Lanka. Not only during games, but wherever we go on tour we are shown great love and support by our fans. I think it’s a big strength for us to move forward as a team. It’s encouraging to know that we have an excellent fan base. I’d like to thank everyone for taking their time to support us.

In today’s team, we have a terrific blend of youth as well as experience. With you obviously as the young leader, Sri Lanka have the right make-up to go a long way.

I think it’s very important to have a combination of young players as well as veterans in a team. I remember when I first made my debut, seniors such as Mahela, Sangakkara, Murali, Dilshan, Vaas and Jayasuriya were there to support me. This is important. When you make your debut for the national team, you are under intense pressure. The experienced players always spoke to us and helped us correct our mistakes. Therefore, it is important to have this mix in our team. Even today, the trio of Sangakkara, Jayawardena and Dilshan teach a lot of things to the youngsters. Moving forward as a team, their advice is always handy and is a great strength to our team.

Vernon Tissera is a journalist and graphic designer by trade and is also the co-founder of The Young Cricketer’s Development Program (TYCDIEP) in Australia.