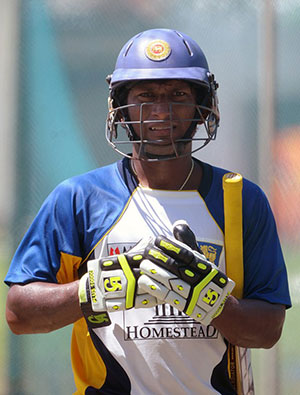 Jeevan Mendis talks to Island Cricket’s Damith Samarakoon in a wide-ranging interview that touches on his Test aspirations, his recent performances in Australia, his rendition of the Gangnam Style dance at the WT20 last year and more.

Do you see yourself more as an all-rounder, a batsman, or as a bowler?

I consider myself an all-rounder. Ever since I started my career, that has been my goal. I didn’t want to be an all-rounder in just one format of the game. My aim was always to play for Sri Lanka as an all-rounder in all formats. During my school cricket career, I used to bowl quite a lot. When I moved into the club competition to start my first-class career, I got an opportunity to play for SSC. Unfortunately, SSC had a whole heap of players who played for Sri Lanka, and they also had a very good spinner in their team at the time. I spent about six years at SSC, where I had limited opportunities to bowl my spin. At that time in my career, I thought of moving to a club that gave me a chance to bowl as well. That’s when I made the move to Tamil Union and met Piyal Wijetunge. He immediately told me that if I wanted to play for Sri Lanka, I would have to play as an all-rounder, and that meant I needed to bowl more. He told me that an all-rounder will always have a spot to fill in the side. I guess he saw something special in my bowling, and started me on a path of working hard in that area of my game, which paid off when I ended up being the player of the tournament in two years, so he has had a huge impact on my career. He never tried to change my natural action or anything like that. He basically told me that I’m doing a few good things and a few bad things, and he helped me focus on working on those areas I needed to improve on.

You mentioned that when you started your career at SSC, you did not get a chance to bowl for six years. Was that frustrating, given that a large part of your school career was based on your bowling?

I think that when you are finishing up as a school cricketer, your dream is to then go and play for one of the bigger and more recognised clubs, so going from playing for St. Thomas’ College to SSC was an incredible opportunity for me, especially given that the club had so many national players within their squad. It was going to be an excellent chance for me to learn from them and gain experience. At the time, there were about nine players in the SSC XI who played for Sri Lanka, and they also had a good spinner in their side, so that’s why I didn’t get a chance to bowl much, but it was a great learning experience for me. Marvan Atapattu and Mahela [Jayawardene] were two guys who took a keen interest in me and helped me out a lot. I guess Marvan saw something in me, and he gave me some tips on batting etc. Mahela was always there to help me in how I should approach the game and the thinking I should have at that level. Even now, both these guys are part of the team and coaching staff, so they take care of me really well.

Sri Lankan players struggle to take the step up from club level to international level, what has been your experience?

Yes, it’s certainly a big step to take. It is quite hard, but I think it all comes down to how you adjust and a good mind setup. And you need to be strong in your mind. It was a very big learning curve for me, but now I think I’ve realised that it all comes down to trusting yourself and your ability, and to keep pushing yourself to the next level. You also need to try and be positive all the time, because if you put pressure on yourself, it becomes very hard to perform. I think the first thing you notice is the standard of cricket goes up very dramatically, and then comes the pressure of expectations and the feeling that the whole world is watching your every performance, so the pressure levels you face are totally different. I guess the other important factor for any newcomer is the role that you are playing. For me, batting at number-four, five, or at six, there is always added pressure when chasing and having to keep up with the run-rate. The match situation, you have to deal with as well — the difficulties come in two forms.

You only recently made your debut for Sri Lanka, and you have already been labelled a limited-over specialist, do you think that’s a fair assessment of your skills?

I don’t think so. At this stage, I am happy with the opportunities I am getting. I also think that you need to earn your spot in other formats of the game through performances, and show them how good you are and how valuable you can be as a player. I guess the other important factor is that the team needs to have a spot that my skill set can be used for. At this stage, the only thing I can do is perform as best as I can, and wait for those opportunities to arrive. I don’t see myself as just an ODI or T20 specialist. I consider myself capable of being able to play in any conditions and in any format.

You mention having a spot to fill in the Test side, given that you are already 30 years of age, do you think you are running out of time in terms of playing Test cricket?

Not at all. These days, if you keep yourself fit and you perform, I think the opportunities are going to come, so I’m not really worried about the age factor at all. What I have on my side is experience over someone who might be young and just starting their international or first class career. I can perform for a good five years or so. I can contribute a lot as a Test player, if and when the chance comes.

You seem to have had a difficult time in the recent Australian series and in the BBL, what went wrong?

With the Big Bash, I only had limited opportunities. I didn’t really get a chance to bat, as I only faced a few overs here and there. I thought I bowled okay, but even then, I only had a few chances to do that. With the Australian one-day games, again, I didn’t really get a chance to bat in the first few games, and I guess there were a couple of loose shots, which can happen to anyone. I’m not too worried about that at this stage.

You are a part of a generation that plays a lot of T20 cricket with huge earning potential in domestic leagues, do you think the focus of this new generation of players is starting to shift from wanting to play for the Test side to trying to play in the T20 side or ODI side?

No, I don’t see that happening at all. For any person who starts a career in cricket in Sri Lanka, I think the ultimate goal still is to play for Sri Lanka in all formats, and especially in Test cricket. What T20 cricket and leagues have done is help players earn more money, because at the end of the day, you need that to survive. I don’t think cricketers in Sri Lanka are all looking to only go and play in the IPL or T20 leagues, as you still want to play for Sri Lanka. You have to keep in mind that these leagues give players the chance to make some money while playing, and that is a good thing, as you have to think about life after cricket for yourself and your family. My personal dream has always been to play Test cricket for Sri Lanka, and that hasn’t changed at all. I think that is the case for most players playing in Sri Lanka at the moment. Playing for Sri Lanka is the ultimate thing.

Tell us about your experience in the 2012 T20 World Cup final?

It was unfortunate that we lost the toss in that game because our plan was to bat first. It didn’t happen, but you can’t control that kind of thing. When we had them at 32/2 after 10 overs, I thought we would be able to win pretty easily. I remember fielding on the boundary line, looking at the crowd, and seeing their expectations — they had come for a good game. At that stage, I thought they will be disappointed because of an early finish. At the end of the day, it was a big game with a lot of pressure for us as the home side, and we didn’t handle it well. We couldn’t bat well for the first time in the tournament, and it cost us. These sort of things happen in cricket, and I was happy that we had come to the finals at least. We have a record of being in some big finals quite consistently, which I think is something no one has done so regularly, and is something to be proud of.

What kind of help have you received from the national coaches since breaking into the side?

Before I talk about the national coaches, I need to mention a few other coaches that have helped me along the way to get into the team in the early parts of my career: Jerome Jayaratne, Piyal Wijetunge, Heshan de Mel and Anusha Samaranayake. These are the guys who helped me train every day for long hours before I got into the team, so I owe them a lot. Talking about Graham Ford, he is one of the best coaches we have had. He is someone who is very approachable, and you can discuss things with him freely. He is a very cool character, and never puts anyone under unnecessary pressure. He is always encouraging me and the boys. Even when we haven’t performed, he will be the first to come and say not to think about it too much, and that he is confident in you to do well in the next game. It’s the same with Marvan and the other coaches. They are very easy going, and you can talk to them about anything. All the players get a lot of support from them. I’m very happy to have them in our side.

Tell us about you doing the Gangnam Style dance during the WT20 after taking a wicket? Are you a fan, and is the song a popular one in the team?

[Laughs] We actually didn’t know about the song at all when I did it. We kept seeing [Chris] Gayle doing it at the T20 World Cup, so I only wanted to pull a Gayle. It was later that we found out about it being on YouTube, and how popular it was. It’s crazy because everyone knows the song now, and everyone enjoys it. It was all a bit of fun.

Damith Samarakoon is a cricket writer for Island Cricket and co-host of the podcast The Armchair Critics.