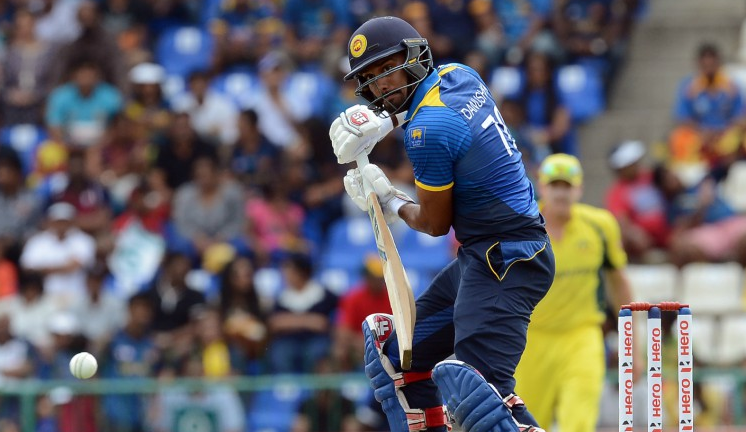 The 25-year-old opening batsman, who can also keep wickets and bowl off-spin, says he wants to contribute as an all-rounder. © AFP

Attacking opening batsman Danushka Gunathilaka talks about the disappointment of not being selected for Sri Lanka's recent tour of Zimbabwe, his ambition of making a quick comeback to the national side and more in this recent interview with Island Cricket's Daniel Alexander.

When did you develop an interest in cricket and how supportive was your family?

My father is a die-hard cricket fan and he hardly missed a match that Sri Lanka played when we were young. My birthday is on March 17, the same day when Sri Lanka won the World Cup, and I still remember how they celebrated my birthday on the day of the World Cup final, even though I was  just a kindergarten kid during that time. This background gave me a reason to live cricket. I would have not been here without the support of my family during hard times as well as in good times.

What is your most-memorable performance in school cricket?

There are plenty of memorable performances. But, if I have to rate those innings, then the 170 runs I scored against Wesley College and all four big match innings, particularly the 86 not out against D.S. Senanayake College in the big match in 2008, are on top. I became the Man of the Match in that big match as well.

What does it feel like to represent Sri Lanka in international cricket?

Any sport person's ultimate goal is to represent your country. You work day in, day out to achieve this milestone. When you get that opportunity, the feeling that comes within your heart cannot be expressed. You feel proud, and at the same time, you realise that you have a national duty to do. It's a mixture of great emotions.

You scored an entertaining 29-ball 46 on your T20I debut in New Zealand against the likes of Trent Boult and Matt Henry, can you talk us through that performance?

I became Man of the Match in the third ODI against New Zealand, with a score of 65 off 45 balls, which happened a couple of games before my T20 debut during that tour. That knock gave me a boost in confidence, coming into this game. Our team wanted to get an aggressive start at the top but a few early wickets pushed us back. I tried to keep the momentum, despite losing of wickets. It would have been great if I scored a 50 as well, but I'm happy with my contribution. Boult and Henry are really good bowlers, but I always try to play on merit. Keeping things simple and following the basics will always help you in the middle. I really enjoyed that game but could have enjoyed it more if we won that game.

What are your strengths as a batsman?

Playing against fast bowlers. It's very important for an opener. I scored heavily in New Zealand, South Africa and England during Sri Lanka A team tours, as well as on international outings. That's my strength. I still have a long way to go and I hope the international experience will help me learn the game and reinforce my strengths.

After Tillakaratne Dilshan's retirement, Sri Lanka are still looking for a limited-overs opening batsman. Can you fill that void?

Dilshan was a great servant to Sri Lankan cricket over the last decade. A good start is really crucial for the overall performance of a team, and I have a strong belief that I will be able to fill the void left by Dilshan's retirement over time and with more experience. I opened for Sri Lanka A for the last four years and for SSC for the last five years, and that experience too counts at the international level. In fact, I've had good outings in my short 15-match international career. I've made three 60-plus scores at a strike-rate of 90. Dilshan was a perfect batting all-rounder and I want to fill that void too as a batting all-rounder. Three for 41 in England was my last performance as a bowler, and I always allocate extra time on improving my fielding skills too. I even kept wickets for my club during the last mercantile league. I know I have a long way to go but I believe I can reach there.

You were named Player of the Tournament and Best Batsman in the recently concluded MCA knockout tournament, can you talk us through those performances?

How difficult was it to handle the disappointment of not being selected for the Zimbabwe Tri-Series?

I was disappointed, particularly after being the top-scorer in our last international outing and top-scorer and player of our last domestic league, but, as a player, you have to understand the fact that things are not always going to go your way. You have to be strong enough to accept everything with positivity. The South Africa tour is on the horizon and maybe the selectors wanted to try out a few other players before that important tour. We will have important series back-to-back after this tour right up until the Champions Trophy, and they would have thought this is the best and only chance to try out a few new players. I take this period as an opportunity to further improve my skills in all departments. I spend a lot of time in the nets now so I can give 200 per cent when I get my next chance.

The first is always the best. My first half-century against New Zealand was my most-memorable performance.

What is your favourite format? Test, ODI or T20?

I like all three formats equally. It's unfortunate that I could not play more domestic four-day first-class matches over the last couple of years due to my continuous involvement with Sri Lanka A team and the national team. Next domestic season starts at the end of November and I'm eagerly waiting to perform there.

Who is your all-time favourite batsman and bowler?

What is your opinion on day-night Test cricket?

The focus could be to attract more fans to the game, which I see as a positive, but personally I feel it is always better to keep the original game without changes.