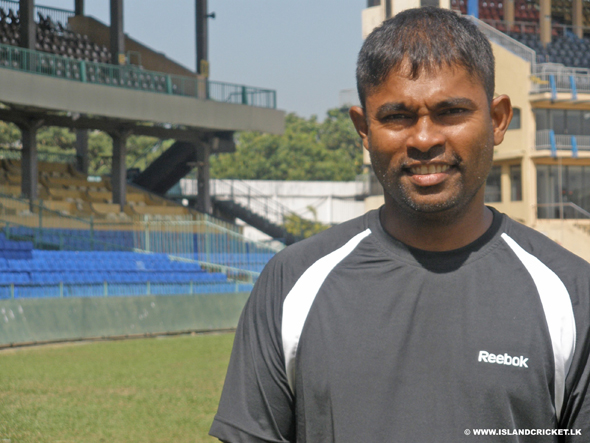 January, 13, 2010: Island Cricket’s S. De Silva caught up with Romesh Kaluwitharana in Colombo recently. The dashing opening batsman along with Sanath Jayasuriya changed the way teams approached the first 15 overs in the ODI format of the game.

What was it like opening the innings with Sanath Jayasuriya?

It was an experienced I enjoyed immensely.

He had the character, the style, and just an aura about him. Opening batting with him will go down as some of the best moments in my life. I did enjoy batting with him and winning games for Sri Lanka in great style.

Whose decision was it to send you up the order?

It was a collective decision by the captain, vice captain, selectors, coach and management. But, I honestly feel it was Arjuna Ranatunga and Aravinda De Silva who made it all happen.

Viv Richards from the West Indies.

Viv was a dominating batsman. He never let the bowlers or the opposition get on top. He had a huge impact on my batting, in my younger years.

Did your retirement go as planned?

The timing wasn’t perfect, but that is how it goes sometimes.

I always wanted to give up when I knew a good keeper or a younger player had a chance to take over.

I remember I had just come back from the Test series in Pakistan (Oct-Nov 2004) where I thought I did fairly well, scoring a half century in the last test match. But, having not even being considered for the squad for the next tour, which was to New Zealand, I decided it is time to call it quits.

What are you up to these days, are you still involved in cricket?

Yes, very much so.

In July 2009, I was appointed as the coach for the Sri Lanka-A side. I have also been coaching Colts Cricket Club in Colombo for the last four years.

On a more personal level, I own a small eco-friendly holiday resort called Kalu’s Hideaway which borders the Udawalawe National Park in Walawegama, Udawalawe.

You featured recently in the ‘Cricket Legends of Barbados Cup’ where you scored a whirlwind 75 off 48 balls. You still look to be in good touch. Any plans of making a return to the international scene in a league such as the IPL?

I really enjoyed taking part in the Barbados Cup. I got the chance to meet my childhood hero Viv Richards there and it was great playing with him.

I love being involved in cricket, but not as an international player. I feel I can contribute a lot in the coaching capacity with Sri Lanka Cricket. Developing youngsters who are going to be winning more games for Sri Lanka is my first priority at the moment. But if I have the opportunity to play cricket like I did in Barbados, I certainly would, just as long as it doesn’t take away my responsibilities as a coach.

As the coach of Sri Lanka-A has anyone caught your eye, or any upcoming young batsmen to watch out for?

There are so many talented players coming out. In fact, at present, there are a few players from Sri Lanka-A playing in the national Squad and cementing their places.

Have any Wicket-Keepers caught your eye?

Kaushal Silva has talent and potential to become a great Keeper. Dinesh Chandimal is a natural too. Hopefully he’ll develop further.

There are some old timers in Sri Lanka who feels T20 cricket will be the death of Test Cricket, what’s your opinion on that?

I have always viewed Test cricket as the ultimate form of the game. I don’t think Test cricket is in any danger of dying out. There will always be a place for Test, T20s, and ODIs. But, in many other ways the emergence and popularity of T20s could be damaging to Test cricket.

Test cricket being a long process you get tested in all parts of the game. You have to have a solid technique and you need to be mentally and physically fit for five days of intense cricket.

With the emergence of T20s, the thinking process that one requires and the technique have all gone downhill. I feel T20s are mostly about slogging and technique has suffered as a result of it.

Another factor unfortunately is that unlike the times that we played in, the financial benefit you gain in playing just T20 cricket alone is huge. This could divert interest from other forms of the game. Children growing up wanting to play cricket will only pick up the entertaining part of the game, but not necessarily the technically correct strokes – that will be harmful on the longer run.