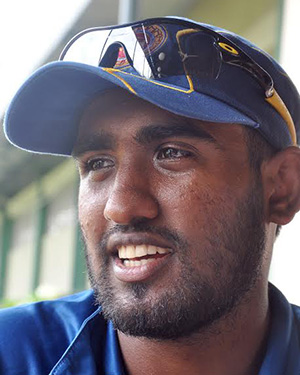 Ashan Priyanjan, who stroked an impressive 74 on ODI debut for Sri Lanka against Pakistan last month in the United Arab Emirates, spoke with Desmond Samith recently at the Nondescripts Cricket Club grounds in Colombo.

Your innings on debut must have been a moment to cherish?

Yes, definitely. I learnt I was playing in the match that morning when we were warming up. It was some pleasant news. The team manager gave me the cap. When I went out to bat however we were in trouble (36 for 3). It was a pressure situation. I was bit nervous before going out. I managed to get a single straightaway, and then I got my confidence back.

For a cricketer playing in his first match, you showed a high degree of confidence and composure. How did you manage it?

Before the match, the coaches spoke to me and asked me to play my normal game. They said I should not feel any undue pressure. Once in the middle, Kumar aiya [Sangakkara] helped me a lot. It was the first time I was facing those bowlers, so those words of advice were really encouraging. He showed me how the bowlers were operating and told me what I should do to tackle them. Thereafter, Angelo [Mathews] joined me and he was always telling me that the runs were already on the board, and I should go on. I didn’t feel any pressure in the middle with the support I got. I also went out with a positive feeling, that I would play my normal game. All these worked for my advantage.

Scoring a half century on debut was a remarkable feat, but don’t you think you missed out on a well deserved century? Had you got there, you could have been the first Sri Lankan batsman to score an ODI century on debut.

I didn’t know it was a record. I found out only when I got back [to the dressing rooms]. I think there was a hundred for me, I could have got there. I felt really sad about the way I got out, but I’m happy that I managed such a good score in my first match.

You perished trying to paddle a good length ball from left-arm paceman Junaid Khan — the ball knocked the off stump down. The shot was clearly not on. Wasn’t it an embarrassing way to get out after all the hard work?

Sure, it was. I just felt like playing that shot, so I attempted it. It didn’t work and I lost my wicket. I received a lot of blame for that shot and the way I got out. My friends back at home were really harsh in their criticism.

You hit three fours against paceman Umar Gul in one over, driving him through extra cover, pulling in front of square; and then punching off the back foot through the covers.

There’s no doubt that Gul is a dangerous bowler, but those balls pitched within my zone, in areas where I like to score, so I went for my shots. Luckily, the fielders were not in those areas and I got those boundaries.

And the battle against off spinner Saeed Ajmal?

Ajmal is a world famous bowler. It was not easy against him. I was cautious at first and played the ball on its merit. I was seeing the ball well. Besides, I was not afraid to use my feet, and again, I received plenty of support from the other end.

What was that piece of cloth hanging out of your headgear? With that on, you looked like Chandika Hathurusingha.

You have to accept the fact that you only got that opportunity to play because Mahela Jayawardena decided to stay back for the birth of his first child and Lahiru Thirimanne got injured. You may not get another opportunity any time soon.

It’s out of my control. It’s in the hands of the selectors. I will face it as it comes. I’m quite prepared to wait for my next opportunity.

Is there any batsman whom you admire the most?

I love the way Mahela aiya plays. He’s pure talent. I don’t think I’ll ever match his class or achieve what he’s achieved. I like to watch him bat, and learn what I can.

You captained Sri Lanka in the U19 World Cup in 2008 in Malaysia. Dinesh Chandimal, Thirimanne, Kusal Janith Perera and Thisara Perera all played in that team.

We had a wonderful time. We played together and did so many things together (laughs). Really unforgettable moments.

Your team-mates made it to the national team before you got the opportunity.

I was not worried. Even now we are good friends, like one family. I was happy when they got the break. Now they are happy that I too have joined them.

Virat Kohli captained India in that World Cup and they won it. Now, Kohli has played 125 ODIs for India and scored over 5000 runs. You are just coming into the team, and players like Chandimal and Thirimanne are yet to make a huge impact. How do you see this?

I think in India they play more cricket. A player like Kohli can easily peak in such an environment. They play a good number of matches in their domestic cricket circuit, so the players mature quickly. Our players are not bad. They are talented. If our players got enough chances, they would perform better.

One criticism is that the quality of Sri Lanka’s domestic cricket is poor, and the players struggle to bridge the gap when it comes to international cricket.

But some players who do well in age-group cricket and for Sri Lanka U19 appear to lose their way in their transition period from schools to clubs. How do you look at this?

I think it’s up to individual players to work hard on their game and develop into good cricketers. They should always talk to their coaches and correct their mistakes. After all, a cricketer should take responsibility for the level of cricket he plays.

How was your passage from under-19 to club cricket, and then to the national team?

I was the best batsman thrice in the under-23 tournament. First, I played under-23 cricket for a team called Sri Lanka Schools XI. It was just after the World Cup. Then, I played for Tamil Union. In the premier tournament, I was placed fourth in the batsmen’s chart. I continued to play well and got chances in the A team. During this time, I was working hard.

You have decided to stick with Ports Authority, a relatively new team in premier cricket. Haven’t you received an invitation from Colombo’s elite clubs to join them?

What do you prefer, Test cricket or limited-overs cricket?

It’s Test cricket. I love to play the longer format, but now this is the opening I have, so I hope to do my best here.